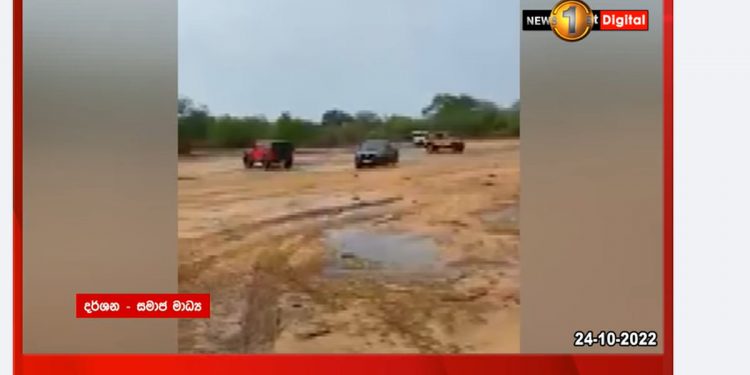 On the morning of the 22nd, five sports type jeeps were entered into zone number two of the Yala National Park, and in the evening, 35 such jeeps had arrived in a row. Although the Department of Wildlife Conservation provided one guide per vehicle, it was a problem to provide 35 guides for 35 vehicles. The reason was that there were not many guides there. Because of this, the authorities of Yala National Park have arranged to provide one guide for each of these five jeeps.

The distance of roads within Yala National Park is 125 km. Almost all the people who traveled in sports type modern jeeps were young people. Rather than watching the animals in the park, it was the need of these people to show stunts with their vehicles. Some people say that there was a cabinet minister’s son among this group. Some media had said that the group of seven jeeps went out of the Yala roads and drove the vehicles in the areas where animals roam like tractors plowing rice paddies. The Yala wildlife authorities claim that this group has driven the vehicles despite the instructions of the trackers. According to Yala’s reports, the tigress named Strawberry and her three cubs also live in this region.

The group drove in jeeps with no regard for Strawberry tigress and her three cubs and other animals.

“On this day mentioned, five vehicles went to Yala zone number two in the morning. Three Travel Trackers were sent with the vehicles. Thirty five (35) more jeeps arrived in the evening as it was too late to go to zone number two. 35 separate passes were given to those vehicles. We do not have thirty five Trackers for those thirty five vehicles. That’s why five vehicles were handed over to each person. The people who came in these jeeps have taken other routes on the way. Seven of these people avoided the tourist guides and drove their vehicles in such a way as to disturb the behavior of the animals.

The off-road team called “Iron Man” came to Yala. They are from different parts of the country. When it comes to visiting the park, we cannot tell anyone not to come. The problem here is that these people went into the forest and killed,” says Manoj Vidyaratne, caretaker of the Yala National Park.

Sam Chandrasoma, the owner of the said ‘Iron Man’ company, says that even though he was in the Yala National Park on the day of this incident, neither he nor his company has anything to do with this incident.

“A group has gone and dug. These said vehicles have been formally entered into the park, but the problem lies in how they behaved inside the park. Otherwise, these guys have not entered the park by force. They have behaved unceremoniously inside the park. Some say that I gave permission to this group to enter the park. I have not given permission. But our officers should also know that when there is a problem, tell us about it. The incident came to light only after this group left the park and posted this on Facebook,” says Wildlife Director Chandana Suriyabandara.

AIDS and STDs are on the rise: 429 people have been diagnosed with HIV in the last nine months of 2022.