Why did Solheim, who was thrown out of the UN, come to Sri Lanka? 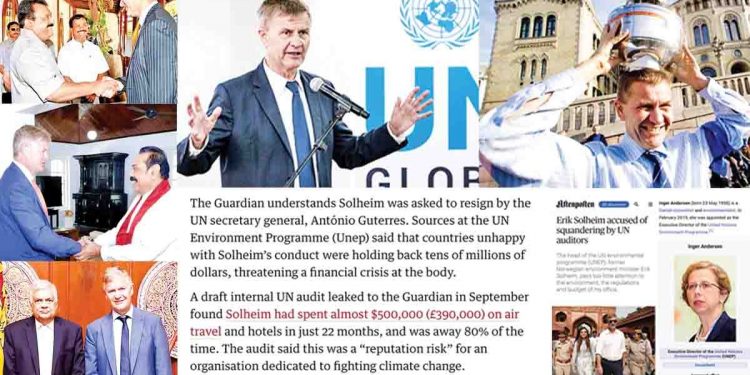 Story of an ex peace negotiator now a presidential advisor

Journalist:- You played a very crucial role in Sri Lanka as an international peace representative. Do you regret taking on the role, especially given the criticism and accusations you faced towards the end of your role as peace negotiator?

Peace negotiator:- Look at this carefully. This is the bloodiest conflict in modern times, killing tens of thousands of people. Because of this, many people in Sri Lanka lost their loved ones. People disappeared, be it soldiers from the village in the south or Tamil civilians in the north. So my regret is that we could not succeed. But we tried hard. I don’t care that we are being attacked by extremists from both sides

.
Journalist:- Somehow you were severely criticized by many parties, right? Even so, you met and discussed with many leaders during that time. Met Tiger leader Prabhakaran on many occasions…?

Peace negotiator:- On the whole I think you should blame the warmongers and not the peacemakers. The Sinhalese extremists said that I am loyal to the LTTE. The Tamil extremists said that I was personally responsible for their defeat. That means Norwegians are responsible for killing Tamils ​​in the last phase of the war. It was not important for us that people criticize us. We need trust from both sides. and had the confidence of Prabhakaran, Balasingham and other LTTE leaders, having the trust of leaders like Ranil Wickramasinghe, Chandrika Kumaratunga and Mahinda Rajapaksa was crusial. I had met Prabhakaran about 10 times. We told Prabhakaran that the war will be lost, there is no way to win this. But he did not accept any of that.

Journalist:- Is it true that Norway provided arms to the LTTE?

Peace negotiator:- That is absolutely false. There was no need for us to give gifts to any party or to receive gifts from any party. We had no need to give arms to the Tigers. These accusations are just stories of extremists.
What is the special story of this peace mediator and journalist? The journalist is a representative of an English newspaper. So who was the other particular person, the peacemaker? His name is very well known.

Accordingly, he worked as a peace mediator in Sri Lanka from 2000 to 2009, when the ethnic war was raging. There he was engaged in that mission mainly from 2002 until the end of the Sri Lankan Civil War in 2009. It was a very long story and many parts of it will not be written here. Anyway, I will write you a short reflection about him because he has returned to Sri Lanka these days.

Erik Solheim, who is currently 67 years old, is a prominent politician in Norway. Also a diplomat. A graduate of the University of Oslo, Norway, he has also worked as an officer in the Norwegian military service for many years. He served as the leader of the Socialist Left Party in Norway for 10 years (1987-1997). He also served as a member of the Norwegian Parliament for 12 consecutive years (1989 to 2001).

Also, Erik Solheim continues to work as a cabinet minister of the Norwegian government for 07 years. Accordingly, he held the position of Minister for International Development and Minister for Environment from 2005 to 2012. The unique story heard here is that he was involved in the peace process in Sri Lanka while holding the position of cabinet minister. Anyway, in the year 2000, the Norwegian government appointed him as an international development representative in Sri Lanka when he was only a member of parliament.

After that, the Norwegian government appointed him as the international peace mediator in Sri Lanka in 2002. Anyway, he was appointed as a minister in Norway in 2005. Accordingly, he participated in the Sri Lankan peace process by holding two ministerial positions until the end of the Sri Lankan civil war in 2009. As time passes, Eric Solheim retires from politics and begins to hold other diplomatic positions. Accordingly, in 2016, he was awarded the position of Executive Director of the United Nations Environment Programme. This is also a position considered as the head of that organization.

I wrote something about this special man named Eric Solheim so that you can get a better idea of ​​who he is. If so, for what mission did this man come to Sri Lanka again recently? Sri Lanka is not really a foreign place for him. However, Eric Solheim is also a very close friend of the Indian government. He worked closely with the Indian government as a diplomat. He recently came to Sri Lanka from Chennai, India. Ranil Wickremesinghe, the current president of Sri Lanka, is also a very close friend of him.

In such an environment, when Eric Solheim came to Sri Lanka recently, all the media in this country had reported that the Executive Director of the United Nations Environment Program, Eric Solheim, is coming on a visit to Sri Lanka. Almost all the media must have reported this according to the information given to the media by the presidential propaganda department. But looking at the proper situation, it appears that this news is completely false. The information about Eric Solheim’s current position is completely false.

This is because he does not currently hold such a position.
He was appointed as the Executive Director of the United Nations Environment Program (UNEP) in June 2016. He was appointed to this special position by the Secretary General of the United Nations, Antonio Guterres. However, Eric Solheim was working in this position, only up to November 2018. From June 2016 to November 2018, he held that position for about two and a half years.

The United Nations Environment Organization is a large international organization headquartered in Nairobi, Kenya. This was started 50 years ago in 1972 under the official charter of the United Nations. Currently, 193 countries of the world are members of this organization. This organization intervenes in the world’s major environmental issues and crises. Its role is very complex and the head of this organization is the position of Executive Director mentioned above. Now, how can Eric Solheim, who has been in that position for two and a half years, lose that position? As accepted by the international community it is due to a kind of corruption and fraud accusation. It has been pointed out by the organization’s publications and media reports as a financial irregularity.

An audit conducted by the United Nations Audit Division in September 2018 has revealed that Eric Solheim spent an unlimited amount on his various trips while working as the Executive Director. In other words, the audit department has revealed that he has spent more than US$ 05 lakh (£ 04 lakh) from the organization’s official funds for several foreign trips made in a period of 22 months. This amount is more than 18 crore rupees in Sri Lanka currency. Eric Solheim has spent the relevant amount in terms of airfare and hotel fees for these foreign trips.

Also, the other accusation leveled against him was that he did not work properly for 80% of the time at the environment headquarters in Nairobi. That is, he has spent most of his time traveling abroad. It was also alleged that some of the environmental programs that he led were not successful. However, the most prominent of these various accusations was his misappropriation of funds from the United Nations. A few days after this situation, an investigation was started against him.

Eric Solheim announced shortly after that he would resign as executive director. Accordingly, he resigned from that position in November 2018. Anyway, several well-known foreign media had reported that United Nations Secretary General Antonio Guterres had strongly requested Eric Solheim to resign from his position.

Now this situation will be clear to you. After Eric Solheim lost that special position at that time, a Tanzanian woman named Joyce Msuya worked in that position temporarily and then on July 19, 2019, a Danish woman named Inger Andersen was appointed to the position of executive director. The appointment was also made by UN Secretary General Antonio Guterres. Accordingly, at the moment that position is held by the Danish environmental expert Inger Andersen.

Government parties had reported that this position, which was created by the President, is not entitled for payments, any money or salary. Anyway, Eric Solheim posted a note on his Twitter account about the position he got with a photo. It reads like this.
Sri Lanka is in a deep economic crisis and has got a new president who has great ambition to get the country out of this crisis. Creating jobs through renewable energy, green solutions and e-transportation can provide great opportunities for economic progress. I am proud to be appointed as President Ranil Wickremesinghe’s International Climate Adviser.

I am not receiving any payment for this post. In addition to my other duties, I will perform duties in this position as well. Sri Lanka is not in a good position to demand compensation for such a position. I worked for 10 years to establish peace in this country. But it later became a military solution and now, fortunately, peace has prevailed. Sri Lanka is a very beautiful country. I would encourage our Norwegians to spend their holidays here. In the face of this strong crisis, I promise to provide all possible help for Sri Lanka…’ Eric Solheim had said.

Regardless of the situation, various parties had accused that Eric Solheim’s visit to Sri Lanka was not a fruitful action. Eric Solheim was often charged with traveling happily from country to country, and even lost his top UN post because of it. Since the new president of Sri Lanka has visited many countries accompanied by his representatives since taking office, various parties are blaming that the country has not received any welfare so far.

Free-trade agreements are critical to increasing the resilience of Sri Lankan apparel.