Who is footing Nasheed’s global tour bill? Is it by Sri Lanka? What a benefit it is to us! 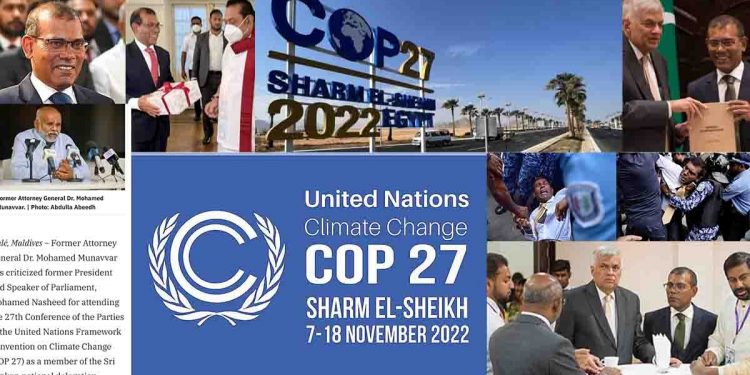 The Maldives’ former president, Mohamed Nasheed, was sentenced to 13 years prison sentence today by the country’s criminal high court on terrorism charges. A three-judge bench of the High Court issued the order. When Mohamed Nasheed was President of the Maldives in 2012, he had ordered the arrest of then-Chief High Court Judge Abdullah Mohamed. In addition, he was charged with several other counts of corruption. Chief High Court Judge Abdulla Didi announced the order and said that the former president will be sentenced to prison for ordering the arrest of Abdulla Mohammed, a Maldivian chief high court judge, and on several other corrupt matters.

Mohamed Nasheed, who is currently the leader of the opposition in Maldives, has not been granted bail by the court before and it was stated that he was brought to the court forcefully dragging him by force. During this, one of his hands got injured, and he sought medical attention for it. But the court has declared that medical treatment should be provided after the hearing. Somehow, after the hearing he was not taken to a hospital for medical treatment, but was directly kept on a boat and taken to the island where the prison is located….’

What is this story? This is a story about an incident which took place seven and a half years ago, on March 13, 2015 as the main news in ‘The Guardian’ newspaper. The news said that there were several criminal charges filed against the former president of Maldives, Mohamed Nasheed. At that time, he even had to serve prison terms on various charges against him. Today we have some reflection about this past story because we hear the name Mohammad Nasheed over and again these days in Sri Laka.

It happened for some sort of contentious happening. It is the story about 2022 United Nations Climate Change Conference, which is currently taking place in Egypt. Mohamed Nasheed, the Maldives’ former president and a controversial politician, is now country’s speaker. In addition, another notable occurrence was Sri Lanka’s , President Ranil Wickremesinghe appointed Mohammad Nasheed as his international climate advisor. Following that, Mohammad Nasheed travelled to Egypt with the President for the aforementioned conference, which had just begun. He is said to be member of the Sri Lankan delegation.

This created a major uproar in Sri Lanka and Maldives. Main reason is how come a person who currently holds a major political and governmental position in another country can participate in a government mission of another country. Also here, the former president of Maldives, Mohamed Nasheed, is now holding a top government position Maldives. He is the speaker, a person who is responsible for the entire parliament. So far, various parties have emphasized that such a person participating in an international conference with a president of another country is a weird happening. Here, Dr. Mohamed Munnawar, one of the leading politicians and an legal expert, the former President of the Democratic Party of Maldives and the former Attorney General of the Maldives, has made a special statement.

Representing another country with Maldives public funds is an unacceptable practise. How can this be accomplished? Where does this leave the Maldives? What is Mohammad Nasheed’s loyalty to his country or to another state, and what has happened here? This is totally unacceptable.

In actuality, this is a legal issue. It’s also a legal problem. According to Article 75 of the Maldives’ Constitution, MPs, or political legislators, must act in the national interest as well as for the welfare of the people. Such people should never promote the favourable or personal interests of others.

According to the Maldivian Constitution, this incident is purely a legal matter. That is, the speaker is a highly responsible position. How can Mohammad Nasheed participate in an international conference representing another country when he is the current speaker of Maldives? I have questioned the Maldivian parliament as to how the money was allocated for Nasheed’s visit. Explain it to the people…’ said former Attorney General Mohammad Munawwar.

Abdul Gayoom, a former president of the Maldives, also expressed support for the statement of the former Attorney General of the Maldives by posting a note on his Twitter account. Likewise, a former attorney general of Maldives, Diana Saaid, a legal expert, also supported these statements and said that this is indeed a legal issue. She has also stated that under Article 75 of the Constitution of the Maldives, such a process cannot be carried out by the current Speaker of the Maldives.

It has also been pointed out that there is a question as to who gave such permission to the current speaker. She has pointed out that participating in an international conference is not a problem, but representing a president of another foreign country and participating together with the same delegation is a surprising process.

Anyway, to the question raised by the former Attorney General of the Maldives, Mohammad Munawwar, about the allocation of funds, the Director of Communications and Media of the Maldives, Hasan Zia, has stated that none of the government budget money of the Maldives was used for the visit of Mohammad Nasheed. And that the expenses of his trip may have been borne by another party. That is to say that it may be held by a group of countries most affected by climate change.

It has been emphasized nevertheless Mohammad Nasheed has represented Sri Lankan President Ranil Wickremesinghe and was a member of the same delegation. Maldives Vice President Faisal Naseem and the country’s Environment Minister Aminat Shona have participated in this international conference. However, people from different walks of life expressed their opposition through social media, strongly criticizing this incident of Mohammad Nasheed.

Meanwhile, the parties loyal to Mohammad Nasheed said that there was nothing wrong with his actions. Those people claim that environmental issues affect every country and people in the world, so there is nothing wrong with Mohammad Nasheed standing up for another country. Pro-Nasheed parties have stated through social media that what has happened here is only fighting against climate change. However, the opposition against Mohamed Nasheed in the Maldives is also very fierce.

Somehow, this incident of the current speaker of Maldives, Mohammad Nasheed, has created a great controversy in Sri Lanka. Several political parties have questioned and expressed their objections in the Parliament of Sri Lanka about that situation. But there have been many accusations that the government parties did not give proper answers to those questions.

The assignment was to serve as an international consultant in the process of resolving Sri Lanka’s current economic crisis. Ranil Wickramasinghe has thus bestowed two high ambassadorships on Mohammad Nasheed. At the same time, President Ranil Wickremesinghe bestowed a high honour on another foreigner last month. It is an offer to Norwegian Erik Solheim, a well-known diplomat, of a position as an international environmental change advisor.

He worked as a peace mediator during the civil war in Sri Lanka and also held two chief minister positions in Norway. Anyway, he later went on to head the United Nations Environment Program and later resigned from that position amid allegations of corruption. He recently visited Sri Lanka and was not on any international tour. But after coming here, Ranil Wickremesinghe President awarded him the above mentioned position. Thus, Ranil Wickramasinghe now has two international environmental advisors. He does not have a Sri Lankan who holds such a position.

In this environment, the Norwegian Erik Solheim said that he will not receive any salary or allowance for the position given to him by the President of Sri Lanka. But there was no definite statement whether such payment will be made for both positions of the Maldivian national Mohamed Nasheed. However, some political parties are mentioning that the Sri Lankan government may have borne the expenses for the recent visit to Egypt by Mohammad Nasheed on behalf of Sri Lanka.

These parties argue that such processes would be a pathetic nightmare in Sri Lanka, where there are poor people who cannot afford to buy a loaf of bread. In other words, they claim that the wealth of the common people has been destroyed there. Those individuals have emphasised that what Sri Lanka needs right now is to save its people from famine, not climate change. Although it is necessary to discuss environmental issues on a global scale, many of these parties argue that what should be done today for the people of Sri Lanka is to mediate about “their great blindness.”

The international conference being held in Egypt these days is named as ‘2022 United Nations Climate Change Conference’ (2022 United Nations Climate Change Conference). This is the 27th session of the annual conference which is held every year and it starts on November 06, 2022 and ends on November 18, 2022. It will be held for a total of 14 days in one of the most scenic cities in Egypt, Sharm El Sheikh. This is a city located near the Red Sea and the Sinai Mountains.

Sharm el-Sheikh is also a tourist paradise. 90 world leaders are going to participate in this international conference of the United Nations. Hundreds of other state representatives will also participate. Since the establishment of the first UN climate agreement in 1992, this conference has been held annually. Governments are in the process of agreeing policies to limit global warming and adapt to the impacts associated with climate change.

However, the topic of our story, Mohamed Nasheed, who is still in the middle of a controversy at home and abroad, is a well-known person worldwide as an environmental leader. He has led many environmental conservation efforts in his native Maldives. He has also received international environmental awards on several occasions. Also, he has had many relations with Sri Lanka for many decades now.

Kuruduwatta Police left us in the courts over a phone call, leaving the crime division to do the submission! 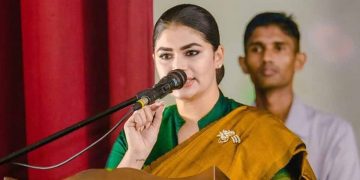 The Commercial Bank of Ceylon has announced attractive new benefits for...