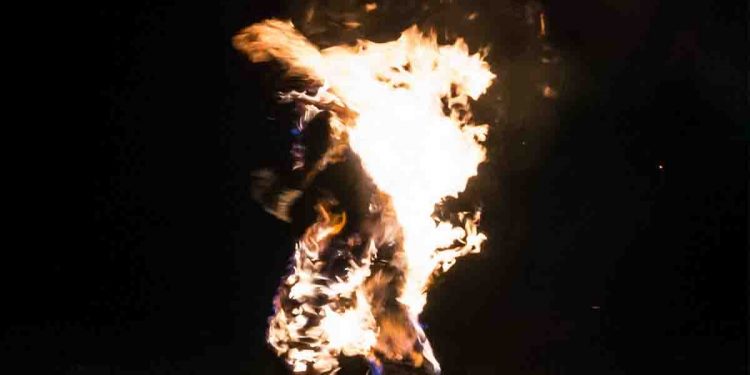 Parents send their children to school and gradually encourage them until they reach the GCE ordinary level. How much hope and expectation do they have in their hearts? How happy would such parents be if their child received all A passes in all nine subjects examined? A child with all nine As was recently subjected to a brutal and inhumane crime in Kandy’s Ampitiya area.

This is an incident where a person who terrorizing in Ampitiya area setting fire on this boy after poring kerosene oil. This boy got nine A s in the GCE ordinary level examination this year. He is a student of St. Benedict College Kandy, named Greation Neumann Bernie Sapon, a resident of Amptiya Pallegama area. He is currently admitted to the intensive care unit of the hospital.

He checked his results on the internet on the 26th, after the ordinary level examination results were released. He discovered that he received excellent grades in all nine subjects. He was ecstatic with joy. Grayson’s exam success was celebrated with a dinner party at the home of his mother’s younger sister. He left with his father’s motorcycle to take part in the celebration. Someone with a fire torch jumped in front of the motorcycle and stopped it on the way back from the party.

He displayed a sword and demanded that the student’s father pay a ransom. However, because the father refused to give the money, he poured kerosene on the child’s body and set it ablaze. This helpless child, burned in front of his father’s eyes, collapsed, screamed, and struggled because he couldn’t bear the pain. The perpetrator of this heinous act then fled, threatening to kill the entire family if they told anyone about the incident.

The child’s father immediately admitted the child to the Kandy hospital with burn injuries. According to hospital sources, he was treated in the intensive care unit and underwent surgery on the 28th.

The student’s father had complained to the police about this. However, he told police that he did not recognise the person who set fire to his son. He did this because he was afraid that if he said he knew him, his life would be threatened, as this thug was a gangster who terrorised the neighbourhood.

According to the media, the hooligan who came to another house in the Ampitiya area about an hour before this inhumane incident demanded a ransom of 10,000 rupees from the house owners, set fire to it, and fled. On the 7th, he tied a person to an electric pole and cut him with a sword, and the injured person is currently being treated at Kandy Hospital.

Residents claim that despite complaining to the Kandy police about the incident, the police were hesitant to arrest the suspect. However, it was reported that the main suspect’s disciple was later arrested in connection with the incident, and the complaint was settled by paying a bribe of one lakh rupees.

On January 26, 2021, another inhuman act was committed by a member of this hooligan’s group who committed the aforementioned crimes. The media reported at the time that two people were taken to a hilltop in the Ampitiya parking lot area, placed on a cross, and rafters were nailed to their bodies, and the crime was also attributed to this hooligan’s group.

The leader of this gang is said to be a marriage broker as well as a drug dealer. According to reports, these gang members are also responsible for the robbery of an oil bowser in Hantane. On several occasions, charges of extortion of rupees 50,000, 100,000, 200,000, and so on have been filed against them. For a long time, villagers have suspected that the law is not being enforced against this group of hooligans who have been accused of this because they have a close relationship with the police.

The villagers claimed that the Ampitiya police are taking no action and that the gangsters are terrorising the villagers and extorting money with ganja heroin. The villagers also stated that they are not speaking out against them because they fear for their lives. Furthermore, when information about this hooligan gang was given to the police, the villagers were concerned that the police would inform the hooligans as to who provided the informations.

However, in relation to the burning of student Gretion Neumann’s body, Kandy Division Senior Police Superintendent Chamil Ratnayake stated that three police teams have been deployed and investigations have begun. However, the media reported two days later that the statement was false.

It has been confirmed that the suspected hooligan is a 26-year-old man named Malith Nisansala Sanjeeva alias Pathum, a resident of Buwelle, Ampitiya, who has recently been arrested by a special police team. He was hiding in a forest near Ampitiya Dambawela and Seminary Estate at the time. Local residents reportedly assisted in his capture, and the suspect was discovered with a hand grenade and a plastic container filled with kerosene and was taken into police custody.

According to the police, the child was set on fire because his father did not pay the ransom. With the suspect’s arrest, many more complaints of such crimes began to pour in against him. Investigations also revealed that the police had ignored the villagers’ complaints due to a connection between the police and the criminal gang.

Even during the power outage, the suspect broke into houses and demanded ransom, intimidated and stole gold necklaces, and stole goods from stores.

Isn’t it true that the police, who are supposed to protect the people, are turning a blind eye while the entire village is terrified of death? How much anguish must these parents have experienced when their child was burned with kerosene? However, if this country’s laws had been properly implemented, this kind of tragedy would not have occurred to this innocent child.

We should be ashamed of ourselves as responsible officials of a country. Because the incident was widely publicised in the media, law enforcement agencies had an easier time apprehending the criminals.

Destroying the lives of innocent children is heinous. This incident is a perfect example of how beasts reign when a country lacks proper laws. Only a strong legal system allows a country to progress. With the country’s economic and social decline, many people are filled with hatred and anger. There are many heartless people in society. Everyone should exercise extreme caution at this time.