We are all waiting ‘Sinhabahu’ to get up… 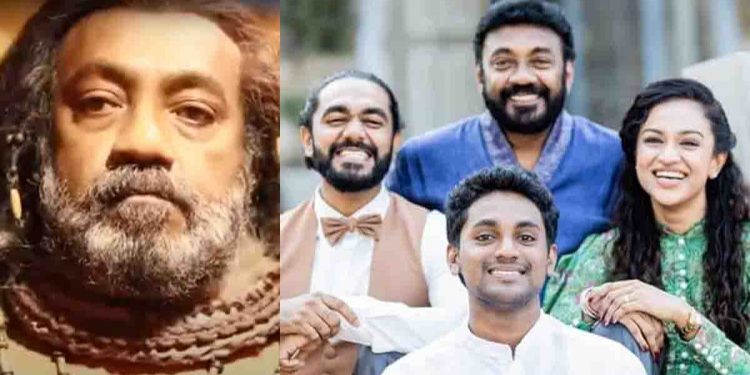 Whole world waiting for him to rise again..
Prayers and rituals would make him bounce back once again…
‘Jacka’ you are a National treasure please stand up again .. our cry is that…

You all know the news that Mr. Jackson Anthony, who is a very talented cinematographer, veteran actor, announcer and a talented singer, met with a serious accident the other day. The accident happened when the cab in which he and his group were traveling was hit by an elephant while returning to the shelter after participating in a shoot in the Anuradhapura area.

His audience, fans and friends who love him constantly inquire about the health condition of Jackson Anthony. Meanwhile, thousands of those fans were shocked and saddened by an irresponsible statement published on social media on July 31. The news said that Mr. Jackson Anthony had passed away.

It is still a problem as to why someone posted a false claim that Mr. Jackson Anthony had died while he was being treated at the hospital. Maybe his aim was to gain attention in social media. But it is not only one person who is inconvenienced by such false information.

Mr. Anthony’s family members and fans who love him were deeply embarrassed by this irresponsible message. Commenting on the inconvenience, his beloved daughter Madhavi Anthony had left a note on her Facebook page.

Don’t share false posts. Increase your likes on social media. Shame about it…’

Mr. Anthony’s son Akila Dhanuddhara had also posted a similar post on Facebook about this false news which is published about his father.

We are proud to be around Dad and the country is waiting for him to recover. Every now and then a person spreads bad news to increase their Facebook views. We have nothing to do with those committed sins. Dad is fine. With everyone’s strength, he will be healed…’

Playing with the pain of those children at a time when they are doing everything they can for their father is very inhumane. They are helpless at this time. Taking advantage of it is very rude and mean. A father is very close to his daughter. Madhavi had recorded love like this.

‘How can you laugh, I’m waiting for daddy to come. The same goes for the younger brothers. I didn’t care when my world fell apart. I was proud when I was little. When I was little, I used to tell my mother’s friends, you know?

Who is my daddy, I am Jackson Anthony’s daughter. That said, it is my protection, my peace, my peace, my strength. Because there was someone who said I was there for my son… Dad asked us to sing while he was in ICU. My favorite line was ‘The pages of the memory book are full of dreams…’ I know why it was repeated more than 20 times. I know why he finally said that to ask his daughter to come. Today I am very scared… wake up daddy… I am lonely…’

A daughter is as much love as a father. That’s the feeling. The two sons and their wives probably feel the same way.

On the day of this accident, Mr. Anthony was admitted to the Anuradhapura Teaching Hospital. The medical director of that hospital stated that two bones in Mr. Anthony’s neck and lungs were damaged, for which two tubes were inserted.

This incident happened exactly on July 5th. The last scene of the movie Sinhabahu was a night shoot. The shooting of that scene started after 6.30 pm in a forest in the historical place Tambuttegama Hattikuchchi in Anuradhapura district. By eight o’clock at night, we were able to finish the shoot. Happy to finish that scene, Jackson came to me and said, ‘Some brother, it’s very beautiful and well done.

I couldn’t believe it then. I don’t know why Jackson hugged me and said that. He put his hand round my body and said that we will meet at the hotel tonight. Jackson left early in his car. He portrays the role of Sinha, the main character of the movie ‘Singhabahu’. Jackson has a habit of driving his own car. I arranged for a driver but he never showed interest.

After the filming, Jackson left. After a while I left. On the way, I got a call from Renuka that Jackson had met with an accident and asked me to take a look. But I didn’t think so. I thought he was talking about another accident. On the way, I saw that Jackson’s red cab had been pushed to the side of the road.

That place is a frequent crossing point for elephants. There was also a warning board. People flocked there. Something is wrong. It was around 9pm then. I went down and asked where Jackson was. When asked that, the people who were there showed that this person is Jackson. I sat next to Jackson, grabbed him by the shoulder and called him Jacka Jacka.

I felt his breath then. That’s when I caught my breath. Was looking at my face. His Neck was bleeding Jackson. I knew that something had happened to the neck. I shouted to those who were there that why are they keeping the patient like this and not taking him to the hospital. I was also angry. Then they said they were waiting for a vehicle to transport him .

I said let’s take in my car. I grabbed the neck and straightened it. The others took hold of the body. Although Talawa Hospital is nearby, I told them to take to Anuradhapura Hospital itself. There were two other patients. One is Jackson’s brother Samantha Anthony. The other is Jackson’s partner Iresh.

Necessary treatment was done at Anuradhapura hospital immediately. After that, arrangements were made to take him to Colombo. We were looking for a helicopter to bring him to Colombo as soon as possible. But since helicopters do not go at night, he was brought to Colombo in an ambulance in less than 3 hours.

My car came behind the ambulance. At the Colombo General Hospital, the necessary tests such as MRI, CT and X-ray were performed and the doctors treated him immediately. He underwent a surgery the next day and was admitted to the intensive care unit. The doctors said that his accident is bit serious. The problem is in his neck vertebrae.

Because of that, the sphincter has been seriously damaged. That’s what the surgery was done for. Still not fully recovered. Jackson spoke after the surgery. He also talked to me in gestures. Couldn’t talk properly.

I told Jackson, ‘I only had one lion, you have to get up somehow. I am waiting for the lion to get up.’ At that moment, tears came to Jackson’s eyes. I was thinking in my mind. My question is what happened to Jackson who was so conscious.

There are different people in this world. There are also people with evil hearts. I can’t imagine why people talk like this. I pray that they will have human hearts to look at things with a human heart instead of talking about the mistakes. He did a great service to our art world. That’s why we need Jackson. I don’t want to be a lion, there are only Jacksons on this earth.

Ediriweera Sarachchandra, Amaradeva, Lester James Peiris are the only ones who entered the world of art. There is no substitute for these people. No one can fill his void. Jackson is also the same. He has a special degree in language and a postgraduate degree in journalism from the University of Colombo. He had the ability to make history interesting to the audience at a time when people found it boring.

He brought new things to the world. We have a semblance of hope for him. We wish that if he can’t stand on his feet, he can sit in a chair and work properly.

Wake up Jacko, the whole world is waiting for you, just like me. Arise the lion. Get up soon… In the end, I have to say that Jackson is a package…’ Somaratne Dissanayake had made such sensitive comments about his comrade.

Jackson Anthony was a loving father to his children and grandchildren. Posting a picture of his son’s, son, he had written in it, ‘The love of a reborn child…’.
This is the note that Mr. Anthony added to a photo of his daughter leaving the university on June 11.

‘If the daughter goes above her father, the world will improve. I am enjoying the happiness of a farmer who is reaping the harvest…’

No matter how tall a father is, his children are still like children. This is the note Mr. Anthony added to a picture of his three children.
‘they are still in my arms…’

Before this accident, the artist Jackson Anthony was happy together with his fellow artists on June 9, when the Muhurat festival of the movie ‘Singhabahu’ was held. He had a great time accompanying artists at the Water’s Edge Hotel.

On May 22, Mr. Jackson Anthony joined the television program ‘Kalu Ganga Nagga’ and said, ‘River is like life. Born again and again. I did not come this long journey to find a river. Find a life…’.

Many people in the art world, as well as many audiences and all those who love him, bless him and perform various rituals and religiouse services. With the strength of all those blessings, we wish from the bottom of our hearts that this helpless artist named Jackson Anthony has a speedy recovery.