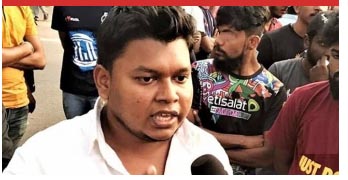 Sri Lanka’s Defence Minister, President Ranil Wickremesinghe has granted approval to detain and interrogate the Convener of the Inter-University Students’ Federation Wasantha Mudalige, Activist Hashantha Jeewantha Gunathilake, and Venerable Galwewa Siridhamma Thera for a period of 90-days under the Prevention of Terrorism Act.

Approval was granted as per a request made by Sri Lanka Police, and Police Spokesperson SSP Attorney-at-Law Nihal Thalduwa confirmed this to News 1st.

The trio was among the 19 people who were arrested by Sri Lanka Police on Thursday (18th August) evening following a protest in Colombo.

15 of the suspects were released on personal bail by the Colombo Additional Magistrate’s Court. One suspect was remanded to the 26th of August by the court.

Venerable Galwewa Siridhamma Thero, Bhashantha Jeewantha Gunathilake, and Wasantha Mudalige were NOT released on bail and were instead held under a 72-hour detention order for questioning.

Amnesty International condemns the Sri Lankan government’s use of the draconian PTA against student activists.