UNP-beaters get jobs. UNP, bow to Rajapaksa! UNP nominees must go to Kaputa. Sajith, explain what the president did to the UNP in Attanagalla. (Video/Photos) (VIDEO) 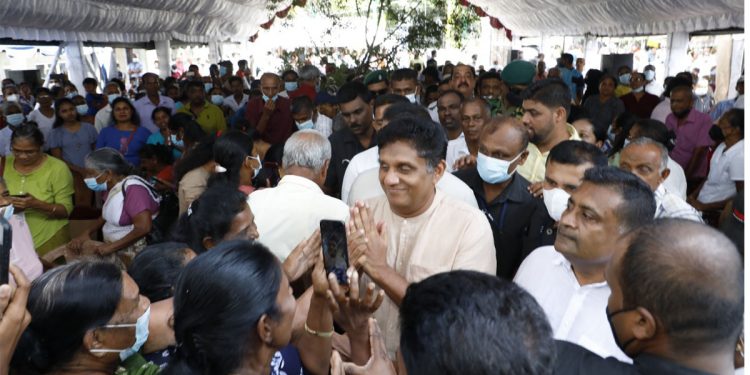 Mr. Sajith Premadasa, the leader of the opposition, said that the government boasting of creating a land of prosperity has taken over a country. But today the country is suffering from malnutrition, the government has suffered from overnutrition.

The leader of the opposition also said that although the current president declared that he would commit himself to fulfilling his duties to all those who were wronged then, today he is fulfilling his duties by giving ministerial posts to the culprits who undermined the United National Party.

The opposition leader said that some members of the UNP had to go to Mr. Mahinda Rajapaksa and bow down to their own sorrows. He said that the fate of the United National Party under the current president is sad and the local government members who have gone astray will also have to get nominations from a crow on Nelum Mawatha in the future. .

The opposition leader said that the government is under threat from the entire international community and said that India will not return the aid, and the international organizations have said that they will not provide any assistance until the country’s human rights and democracy are secured.

Mr. Sajith Premadasa, the leader of the opposition, said this today (18) while addressing the constituency meeting of the Attanagalla Samagi Jana Balawega in Gampaha district.

The opposition leader said that when the whole country was in a serious crisis, some of the ministers of the government used to put on firework displays during their conferences and said that they got those positions from the current President, Mr. Ranil Wickramasinghe.

The opposition leader said that this country can be built through humanistic capitalism and said that the United People’s Force will dedicate itself to that.

When Vasantha was incarcerated for 3 months, the strugglers celebrated Wasantha’s birthday outside.

The book fair’s prices have tripled.