Unfortunate plight of our mothers and sisters in Oman; who is to blame and how can this be avoided? 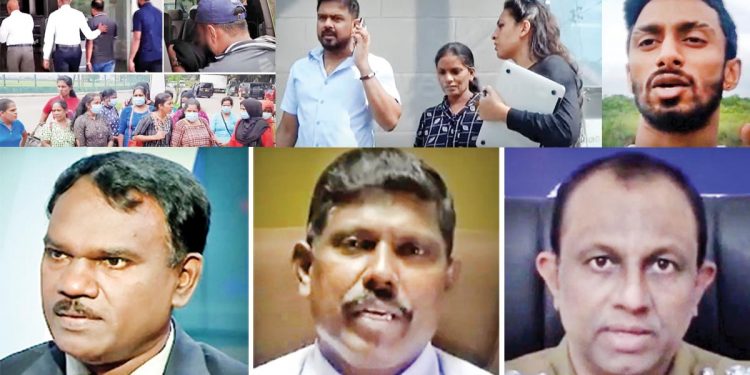 ‘In the room, I was sexually assaulted.’ I’m not afraid to speak up. I informed the Foreign Service, as well as the C.I.D. My parents went wherever they could. However, there was no justice for me. ‘Comes to the room without clothes while I am cleaning the room,’ I told the lady of the house. It was later explained to me that this was normal.

Don’t worry about them. They told us that if we came here for work, we should be prepared to face such things. Another says, “Come stay with me, I’ll pay for it.” I went to the embassy and explained that something similar had happened to me and that I wanted to move back to Sri Lanka.

They stated that those who arrived on a visit visa would not be accepted. We were visiting this country for the first time. I am twenty-one years old. We came because we felt helpless. However, they have stated that they will not accept us…’

This is the story of a young woman who was recently sexually assaulted in Oman, told through tears. Today, our country’s innocent young women are helpless in Oman. They leave the country because it is difficult for them to find good jobs and live in this country.

“Some of our agencies are sending young girls to Oman at changing ages by adding couple of years to the real age.” Beautiful girls are kept in agencies in Oman and sold for money to employers in other countries. It is done in a form of a racket. There has been no decision made by any authority in this regard. I am pleading with Sri Lankan mothers not to let their children be held by rogue agencies and deported to another country, leaving their children destitute…’ He also revealed that there is a plot to kill him as a result of his disclosure of these facts.

In the last few days, the media revealed about the injustices that happened to the women of our country in Oman. It was also revealed that the women were bought by Omani rich people.

Agencies in Sri Lanka work to sell women in this country at such auctions when they do not choose a job and travel. These women were taken to the Oman office and given the opportunity to choose according to the tastes of the Arabs. It was revealed that these traffickers have acted very cunning manner.’

Fraud and corruption are the primary causes of our country’s current plight. It’s a shame that the innocent women who have suffered in this way have to be deported.

Human trafficking is the reason for sending women to earn foreign currency. On the 18th, a Sri Lankan returnee from Oman was apprehended. He is 44 years old and lives in the Dehiwala neighborhood. According to the Foreign Service Bureau, he ran a foreign employment office in Maradana. He had duped 19 women into accompanying him and returned back with him to Sri Lanka.

The women who got caught to this man’s tricks and had come before the Negombo court asking to save their sir claiming he is innocent. But he is currently in custody. On the 21st, another person involved in human trafficking was arrested in the Puwakpitiya area of Avissawella. He was remanded until December 1st.

A young mother and daughter who were victims of this scam described their painful experience in this manner.

I went abroad on 03.10.2021. Went to Oman from Dubai. Worked in a house for 4 months. I called a gentleman named Kushan at the embassy and told him that I want to get back to my two children and want to go to Sri Lanka. He called me and sent me a location.

A taxi was booked and asked to come. He took me to sir’s house and asked me few questions. He asked what your problems are. He immediately put his hand on my shoulder saying that he will try to send me. He puts his hand and pulled and pulled me. I pushed. I said I came to talk.

The other girl said, ‘Kushan sir forced me to go and work with the people who run brothels…’

It was revealed that an officer attached to the Oman embassy who used to sexually exploit young women in our country was also involved, but he has not been arrested yet. In an inquiry made from the Foreign Employment Bureau, they said that the officer in question will be suspended and brought back to Sri Lanka. Oman’s former third secretary. A person named E . Kushan. This is what he told the media.

Selling to brokers without a document. Even children under the age of 20 have been raped. I strictly enforced the law in this regard. That’s why the visit visa mafia fought with me. In 2022, 44 people came on visit visa. Most of them are corrupt. We do not have passports to send these women back to Sri Lanka as soon as they say they want to go. They were sold to brothels for 1200 riyals. I caught it. Oman police fined each one of them 1000 riyals. They hate me because of this fine. I cannot come even though I was asked to come from Sri Lanka. I am a responsible officer. If I’m coming, I’m coming with information about human trafficking…’

A large number of women have made accusations against this person. Several women also accused him of raping them.

Dushmanth Weeraman, a singer of our country, and his wife, Stephanie Siriwardene, had recently rescued a woman who had been used for sexual slavery in Oman. This is what Dushmant said about this incident.

The responses received from the embassies are negative when try to rescue these women. After saying that there are voice cut details on my phone, they have not even answered the phone till today…’

We should be thankful for the mission they did for our own helpless women. This is what the woman said about the situation she faced.

When we go to the airport in Oman, the agency comes and takes us to a room. There were many people from different countries in it. The owners of the agency are asking why we came to make them helpless.’

Poor and helpless women in our country leave because they cannot feed their children. After mortgaging their homes and belongings, some women travel abroad with a thousand hopes and dreams. How can they solve their life problems if such fate befalls them in those countries when they travel abroad?

Three suspects involved in smuggling were arrested on the 21st. It was revealed that a woman was also involved in these crimes. It was also mentioned that she had worked as a translator in Oman.

Investigations revealed that the foreign employment agencies had prepared passports, issued tourist visas and sent them abroad. It was also confirmed that brokers in Sri Lanka and Oman have participated in this work. We are investigating whether human trafficking has taken place in our country and whether other crimes have taken place in such trafficking…’

Various things are published in the media about the state of Oman. Oman is a country that has provided 19,000 jobs to Sri Lanka under the legal system. We should also remember about the women who were molested in this controversial incident as well as the opportunities that were given jobs in 2022. When someone goes abroad on a tourist visa, we cannot stop them…’

Gamini Senarath Yapa, Deputy General Manager of the Foreign Employment Bureau, said, ‘After receiving the report of the Criminal Investigation Department, further action will be taken. Legal action has been taken regarding some matters presented in their recommendations and conclusions. There are more than 90 displaced women in the Sri Lanka office in Oman. Among those 90, there are also women caught in this trafficking…’

‘Some foreign employment agencies have deceived young women and taken them to the country by saying that they will provide jobs in Oman. Many have been taken using tourist visas. Later, it was revealed during the police investigation that employment agencies in that country lined up girls and women and sold them for sex based on their age and appearance.

If someone goes abroad looking for a foreign job through an agency, they should be careful about these things.’‍

6. Insurance certificate etc. It is unfortunate that such smuggling happens. There is no end in sight to this smuggling. Women don’t go to the Middle East to enjoy luxury but to protect their family. To earn foreign exchange to the country.

We should not forget that the pride of our country is our workers. Will our dignity be allowed to be tarnished? We have to ask again and again whether the authorities of our country are acting like this without self-respect. Such inhumane acts should be properly punished, and the law should be implemented. It’s a shame that things like this happen.

Ali Sabry praised China before landing in US