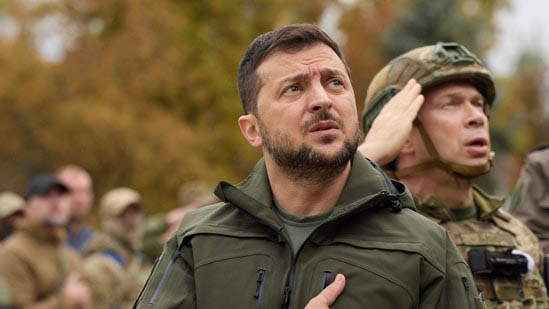 According to Ukrainian President Volodymr Zelenskyy, seven Sri Lankan individuals who had been detained by Russian forces since March were rescued in the areas of the Kharkiv region that had been liberated.

Investigations are still being conducted in the parts of the Kharkiv region that were freed from Russian rule. Ruscists are being held accountable for all of their crimes, and proof of their guilt is being gathered. It has been discovered that there were places where people, including foreigners, were imprisoned and torture chambers where residents of occupied cities and towns were tormented.

Seven Republic of Sri Lankan citizens who were studying at Kupyansk Medical College in particular were saved. They had been taken prisoner by Russian military back in March and afterwards held in a cellar.

“These folks were only saved lately, following the liberation of the Kharkiv region. They are receiving appropriate medical attention, he said, according to Ukrayinska Pravda.

Yevhen Yenin, Ukraine’s deputy interior minister, stated on September 15 that peaceful international students from an Asian nation attempted to depart for territory under Ukrainian control but were stopped by Russian military soldiers, held illegally, and subjected to torture.

Ihor Klymenko, the head of Ukraine’s national police, claimed that “torture cells” had been discovered in the towns and villages of the Kharkiv region that had been retaken. It was impossible to independently verify the assertion.

He added that seven Sri Lankan students who were taken hostage by Russians in Kupiansk, a city also in the Kharkiv region, have complained of being imprisoned and tortured.

They’re afraid because they were mistreated, Klymenko said. Two people with damaged toenails and “a woman who can scarcely talk” are among them.

Inspecting a mass grave in Ukraine, Zelenskyy claimed that investigators had discovered evidence that some of the dead had been tortured, including victims with shattered limbs and cords around their necks.

The site, which was just retaken from Russian forces and is located close to the northeastern city of Izium, seems to be one of the biggest ones ever found in Ukraine.

Just hours after the exhumations started, Zelenskyy recorded a video in which he spoke, ostensibly to emphasise the seriousness of the discovery. He claimed that although more than 440 graves had been discovered at the location, the exact number of deaths was still unknown.

Stop oppressing people! Dissolve the legislature now! Allow for a fresh directive! a demonstration in front of the UN in New York!