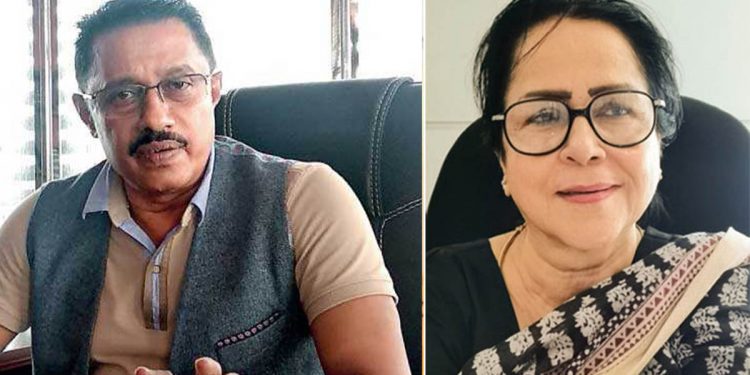 It goes without saying that Sri Lanka is in a crisis situation. But we must not forget that crises provide an opportunity for both traitors and heroes to emerge. Traitors are the most visible at a time when Sri Lankans face numerous critical challenges. But that doesn’t mean there aren’t any heroes. Unfortunately, most of the heroes we meet at this critical juncture are ‘Poteguru’ theory heroes, so their heroism is not felt by ordinary people. Heroes who directly take up arms on behalf of the people, on the other hand, are not unheard of. Two such heroes in today’s society are Janaka Ratnayake, chairman of the Public Utility Commission, and former judge Rohini Marasinghe, chairman of the Sri Lanka Human Rights Commission.

Janaka Ratnayake is the current chairman of the Public Utilities Commission. A businessman by profession, he is also the chairman of several companies including Trillium Property Management Services Pvt., City Housing and Property Company, Trillium Residences Pvt.

The Sri Lanka Public Utilities Commission Act No. 35 of 2002 established the Public Utilities Commission, whose main purpose is to regulate several large-scale public enterprises. It is the government agency in Sri Lanka in charge of electricity regulation and distribution policy formulation, as well as water supply and petroleum resources. In the country’s two decades of history, Janaka Ratnayake is the only chairman who has remained in the hearts of the people. People now recognise him as a fighter who opposes Kanchana Wijesekera, the minister in charge of raising the electricity bill, which has become a huge burden on them.

The chairperson of the Public Utilities Commission is appointed by the Constituent Assembly. As a result, he does not need to maintain an overly close relationship with the minister in charge of the subject. Janaka Ratnayake can be described as a chairman who benefits from his position. Last August, the government raised the electricity bill. That is nearly 75%. The minister in charge, on the other hand, demanded a 250% price increase. With the intervention of the Public Utilities Commission led by Janaka Ratnayake, it was possible to withdraw 75% of that request, which affected electricity consumers.

The government, on the other hand, is not giving up. The minister has presented the cabinet with yet another proposal to increase the electricity bill by 250%. Janaka Ratnayake stated openly that he would oppose the proposal even before it was introduced. Not only that, but he has openly stated that if the government raises the electricity bill arbitrarily, he will sue. Following the rejection of the Minister of Electricity’s statement, the Minister attempted to disguise it as a statement by the Attorney General, but Chairman Janaka Ratnayake destroyed it as well. As a result, increasing the electricity bill is now a difficult task. On one side, there is a minister. The Chairman of the Public Utilities Commission is on the other side. There is no doubt that the people’s desire is for the minister to be defeated.

The fight between these two is not only for the electricity bill. When the Chairman said that there is not enough coal for the Lak Vijaya Thermal Power Plant, hence there could be a power crisis, the Minister denied it. Finally, the engineers also approved the chairman’s statement, so the minister had to accept. Janaka Ratnayake openly said that substandard crude oil was brought to Sapugaskanda. The minister was against it even then. But the unions confirmed the chairman’s story. Once again the minister was defeated.

It was seen recently that Janaka Ratnayake was really a ‘thorn’ to the government. Therefore, the government once prepared to establish a separate public utility commission only related to electricity. Janaka Ratnayake pointed out that the reason for the board’s loss was political decisions, and the 25% reduction in the electricity bill in 2015. Moreover, he also revealed to the country that the board made some operating profit after the price increase in the last quarter of last year.

Janaka Ratnayake fought on behalf of the people against the electricity and fuel mafias. Conflicts arose not only with the minister in charge of the subject and the legislature while fighting in this manner. He also had disagreements with the country’s executive. President Ranil Wickremesinghe once publicly chastised Janaka Ratnayake. The President stated that he will oppose the increase in the electricity bill because it will raise the bills of his companies. Janaka Ratnayake responded quietly.

Without mincing words, he said that the President had been misled by someone and that challenging a Chairman is not suitable for a President. Ranil Wickramasinghe, who was tempered by politics, became silent with that.

Furthermore, at the most recent press conference, Janaka Ratnayake boldly made a special statement in front of the media. He stated there that if the electricity bill is raised unfairly, he will use the commission’s veto power to cancel it. It is a story told by no other commission chairman in history. It is the most compelling evidence of his bravery.

Rohini Marasinghe, who obtained a law degree in 1976, joined the Attorney General’s Department in 1980 as a government advocate. Elevated as a Judge of the Court of Appeal in 2006, she was appointed as a Supreme Court Judge in April 2013. A graduate of the University of Hartford, she is a panellist at many conferences and programs around the world, including the Commonwealth Magistrates and Judges Conference and the South Asian Association for Regional Cooperation Summit. President Gotabaya Rajapaksa appointed her as the Chairperson of the Human Rights Commission of Sri Lanka (HRCSL).

The chairmanship of the Human Rights Commission is also an appointment made by the President on the recommendations of the Constituent Assembly. But Rohini Marasingha is still working in her position, proving practically that the position should be used for the sake of the human rights of the entire people of the country, but not for the salvation of the rulers. She managed to make it clear not only to Sri Lanka but to the world that human rights are beyond what many people thought of and that living under a good economic condition is also a human right.

She participated in Sri Lanka’s fourth Universal Periodic Review (UPR) held in Geneva a few months ago, and explained very well how the short-sighted policies of the previous government had plunged the country into an unprecedented political-economic-social situation. She said there that the situation led to the ousting of President Gotabhaya Rajapaksa and the short-sighted ban on chemical fertilizers destroyed the agriculture industry in 2021. The chairperson said that the public trust in the government was broken due to the loss of government revenue due to the unnecessary tax concessions given after the 2019 presidential election, acute fuel and gas shortage and disruption of the supply of medicine due to the foreign exchange crisis.

Another example of her emphasising the inextricable link between the economy and human rights was her collaboration with the National Audit Commission in recommending to the government that the tax revenue lost by lowering the sugar tax be recovered from the parties who took advantage of it. The Human Rights Commission, under her direction, launched a special investigation into the government’s decision to raise the electricity bill based on newspaper articles published without complaint. She stated that the arbitrary price increase should be viewed as an impediment to citizens’ right to live. If the electricity tariffs will be raised again in January, the Sri Lanka Human Rights Commission has already stated that they will take action. It was an opportunity to push the boundaries of human rights even further.

Rohini Marasinghe acted as its chairperson to direct the Human Rights Commission to immediately investigate the attack on Gota Go village on May 09, after a meeting held at Araliyagaha Mandiraya, the commission proceeded to recommend to the President that an investigation should be conducted on all the police officers who were working around the protest site, including the Inspector General of Police, who failed to control or prevent the people who came to attack the peaceful protesters.

The Human Rights Commission took steps to demonstrate that police officers’ violations of human rights pose a serious threat to the life of a democratic society and the rule of law in the country. The commission summoned the Inspector General of Police and the Secretary of the Ministry of Public Security to investigate the arbitrariness of police officers in suppressing public activities such as agitations in the past. It is yet another once-in-a-lifetime opportunity in the field of human rights in this country.

The Human Rights Commission’s vehement opposition to the detention of Inter-University Students’ Union convener Wasantha Mudali and Inter-University Bhikshu Balamandal’s Reverend Galwewa Siridhamma Thero under the Prevention of Terrorism Act, as well as her vehement condemnation of the government forces’ attack on the Galumudoora protesters, demonstrated the Chairperson’s efficiency.

Janaka Ratnayake’s and Rohini Marasinghe’s professional roles demonstrate the wonder of an independent public service that is not biased toward ministers and is free of political control. President Mahinda Rajapakse enacted the 18th Amendment by repealing the 17th Amendment, which allowed high government officials to work independently, because such independent officials are a headache for rogue politicians. The good governance government once again introduced the 19th amendment and resurrected the Independent Public Service Commission.

The Mahinda Rajapaksa government, which returned to power in 2020, enacted the 20th amendment and assumed control of the public service, which had been made independent by the 19th amendment. Recently, the opposition’s 21st amendment to the constitution was adopted along with the government’s proposals, releasing the public sector from the grip of politicians to some extent. We believe Janaka Rathnayaka and Rohini Marasingha are doing this work in the established space.

India, Sri Lanka are bonded together by Buddhism