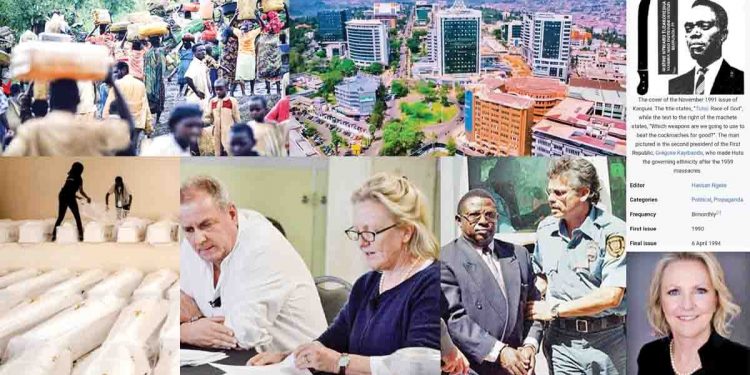 I was in Nairobi, Kenya when I heard about this incident. Several of us foreign journalists worked in Nairobi. I worked there as a British journalist. We got to know the news that the plane carrying the president of another African country, that is Rwanda, was shot down by a group of rebels. At the same time, it was heard that there was a severe public unrest in Rwanda. The news also showed that this situation is getting worse by the minute. Some of us foreign journalists decided to go to Rwanda as soon as possible. We then hired a small plane and flew from Nairobi to another African country, Mabarara in Uganda

If so, that time is exactly 25 years later. Information about a genocide that happened in the year 1994 in Rwanda, an African country, has entered the history of the world. If so, 28 years have passed since that terrible tragedy happened. Catherine Bond, the journalist, was a middle-aged woman 28 years ago, but she is now an old woman. She is an accomplished journalist who has worked for several well-known media organizations in the world for decades. Anyway, based on her long experience, she is currently working for the World Bank. She is also the English author and Principal Adviser in charge of the African Region to the World Bank. She is a graduate of Edinburgh University, Scotland, which is a famous university in the world. We continue to hear her adventurous story.

Journalist – What happened after arriving in Kigali, the capital of Rwanda? Is this the beginning of a great tragedy in the world?
Catherine Bond – Yes, obviously. When we arrived at Kigali airport, we could not get out of there. It was reported that violent riots had started in the capital and many other cities. The airport authorities did not let us out. We then slept on the floor of an airport terminal for two nights (over two days). At that time, the capital Kigali was a very small city. When we spent two days at the airport, there were continuous reports that a massacre was taking place in the country. The rebellion started under the leadership of the army spread violently and after that, it was learned that there were very serious killings between two main tribes in Rwanda. Anyway, two days later we went into the country with French, Belgian and UN troops.

Journalist – Is this a nightmare come true? What happened after that?

Catherine Bond – When we went through the city on those roads, people get very excited and come out of their houses and wonder what is going on. Men, women and children were everywhere. We passed the disturbed roads and came back to the same roads after two or three hours. There had been a destruction unbelievable manner. People who were living well when we left were killed scattered everywhere when we came back. These killings were carried out by racist groups led by the Rwandan army.

These extremist groups also stopped and checked our car at several places. Each of them had weapons like swords, knives, axes and big knives in their hands. We passed by these killers who killed those innocent people in groups. Even today, we cannot imagine these terrible scenes. But somehow the world’s biggest human massacre had happened like this.

Journalist – We have heard from many media reports that you went to Rwanda when the riots started and stayed in Rwanda for the 3 months during the riots and performed a very difficult media mission?

Catherine Bond – Yes. It’s a very long story. I worked to report the horrific massacre that took place from April 7, 1994 to July 15, 1994.
Journalist – Two media organizations that were in Rwanda at that time were involved in conducting this genocide more widely, right? How was this environment ?

Catherine Bond – Obviously it’s true. Those two media organizations that existed then should be held responsible for this great destruction. In a period of 03 months, around 08 lakh innocent people were killed. This is a disturbance between two tribes in Rwanda. That is, hundreds of thousands of Tutsis were killed by the Hutus. The above two media organizations worked very tirelessly to create hatred towards the Tutsis among the Hutus. If they had not done so, such a great destruction would not have happened. The origin of this destruction was the army leader named ‘Bogansora’. and the media.

Many things have been written all over the world about this great genocide written in black letters as well as blood in the history of the world. The above is only a small part of a long article written for you. The reason for writing this article was a wonderful story that I heard from Sri Lanka recently. Did you hear this story from our Parliament which is a usual place where people’s voices are heard every day? These words were heard in the voice of a well-known member of the society. His name is Member of Parliament S.M. Marikarya. Let’s hear this story in his own words.

I am also a journalist. I also worked as a media agency head. Media organizations have the right to report, not to make decisions. In the past, we have seen how some media organizations continue to work to confuse people’s minds like this. They worked according to their own agendas.
You and I visited Rwanda recently. In 1994, we saw how the Rwandan media was involved in killing a million people. And we know what happened to them. Within 100 days, two media organizations were responsible for killing 10,000 people per day. Today one is dead and one is in jail. Therefore, this situation must arise at some point.

Therefore, Mr. Speaker, if journalists and media organizations think that they can control politicians and turn them into dancing puppets, we cannot allow that to happen.
This is where the law is made. Where the country is ruled. They have the right to point out mistakes and report them. But I am saying here that we should take the proposal of the MP Vijayadasa Rajapakse and create a permanent and strong program for this situation. But tomorrow they will show that , that too as the same. That is how they control the media. But anyone can say anything. We are not afraid of that. They cannot even stop us from coming to the parliament because of the racism they create.

That’s a different story. But I request you to take a firm policy decision on this situation. Rwanda took firm decisions after the genocide and sent those who instigated those crimes to prisons. Also, an owner of a media company has been imprisoned for life. The other one died. Today, Rwanda has become a free Rwanda, a law-abiding society, and Rwanda has become the Singapore of Africa…’

Why did Member of Parliament Mr.S.M. Marikkar make such an exciting statement? The real reason for it was a statement made by Minister Wijayadasa Rajapaksa in Parliament against a certain media organization recently. These stories have made sense that some media organizations in Sri Lanka are working unfairly to propagate some hateful and racist situations among the people.

These politicians had pointed out that due to the activities of some media organizations in Sri Lanka, the hatred and of the common people towards certain parties will arise. There have been many accusations that some media organizations in Sri Lanka worked to create racial and religious struggles, especially by creating discord between races and sowing hatred between races. They are of the opinion that the attack on Muslims in Dargah town, the attack in Kurunegala, the Easter attack and Dr. Shafi Sahabdeen incident are the best examples.

In a way, this situation is similar to the malicious process carried out by the media organizations in Rwanda at that time. Somehow, various parties have brought a strong allegation that there are media organizations that have been working in this way in Sri Lanka for some time.

Catherine Bond, the veteran journalist who reported the Rwandan genocide from the beginning to the end, who holds a special position as an English author as well as a consultant at the World Bank, had stated on many occasions that the two media organizations that existed in Rwanda at that time were mainly responsible for the genocide. Also, the British writer Alan Thompson, who is compiling a special book about this great tragedy, also engages in a rigorous analysis of this situation.

The title of the book written in English is Media and Mass Atrocity – The Rwanda Genocide and Beyond. It has been clearly shown that the above extremist media outlets worked to spread hatred for the killing of the ‘Tutsis’ living in the country by the ‘Hutu’ in Rwanda. This disaster started in 1994 with the assassination of the then President of Rwanda, Juvenal Habyarimana.

He was a military leader and was killed after his plane was shot down. His main opponent there was Theoneste Bagosora, who was the head of the Rwandan army at the time, and who led a major rebellion after the assassination of the president. Here these people belonged to the above two tribes. Accordingly, the majority were Hutus. There is a battle against the second tribe, the Tutsis. This was indeed a very brutal battle. There, Bagozora declared to his army that the Tutsis should be massacred, and for that, the Hutus should be armed and motivated to do so with the support of the army.

This great inhuman genocide begins under such an environment. A Tutsi nationalist leader named Robert Kajuga joins the military leader named Bagasora to carry out this great destruction. Also, the other person joining for that destruction is Felicien Kabuga, a Rwandan millionaire. Anyway, the most unique fact revealed here is that this billionaire had two media organizations at that time. That is, he was the sole owner of RTLM TV and Radio and the well-known Sahara and newspaper company Kangura.

Here he launched this hateful campaign by employing the editors and staff of his media organizations. Somehow, he employed two chief editors, Hassan Enges and Batutsi Bovoko. But the main role was played by the author Hassan Engos, who was branded as a terrorist leader for a long time. Through these malicious campaigns of theirs, they said that the Tutsis should be wiped out from Rwanda. Accordingly, about 800,000 Tutsis were killed by this criminal campaign. This is how two media organizations in Rwanda contributed to this great crime in an extremely brutal and savage manner.

The other most special story of this great destruction which added a black spot to the history of the world is that all those criminals were later caught by the law and punished. It is also special that these sentences were imposed by the International Criminal Court in The Hague, Netherlands. Two of these 04 main criminals have died and the other two are serving punishment.