This regime fears elections like Haji fears baths! If you can delay the election! We will defeat the government with all opposition parties! Dallas’ final government pronouncement! (VIDEO) 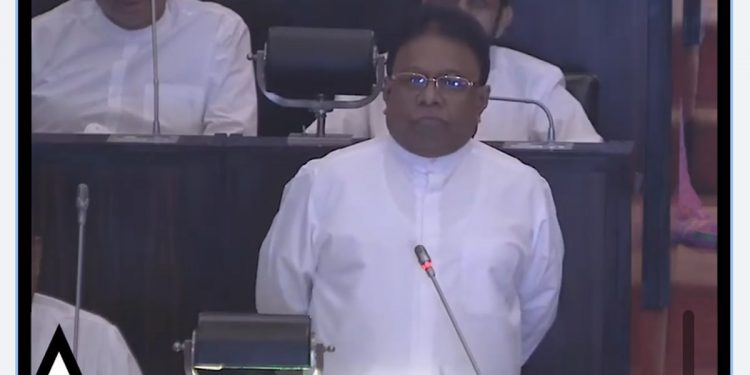 Parliament member Dallas Alahapperuma says that the government is preparing to remove Mr. Nimal Punchihewa, the chairman of the Election Commission, based on the technical issues that arose with the 21st constitutional amendment.

He mentioned this while attending a news conference .

“We keep talking about postponing elections.
What is the government going to do now?
The local government election process officially started on the 20th of September. The state leader, President Mr. Ranil Wickramasinghe, who had been silent until then, made a statement as if he had woken up from his sleep. Change the electoral system. The electoral system has many flaws, it should be reduced to 4000 or more.
There are positive features like that and they are not bad things.
But what are you going to do after the official election process started?
The president’s statement did not end, now the government has informed the speaker to appoint a selection committee to investigate immediately under fifteen points regarding the change of the electoral system.
What is this selection committee? Since 2008, two selection committees have been appointed for this purpose, and the chairman of both of them was not a child, but the current Prime Minister Mr. Dinesh Gunawardena.
There are many good recommendations given by them and all the former representatives of the selection committees have expressed their agreement for a mixed election system. At a time when the recommendations of both the above selection committees have been presented to the assembly, now why has this new selection committee been appointed. There is a saying in the village “Bull When you turn around, you will know which coconut tree to eat”… We have a meaning about this. Therefore, it is clear to the country what they are trying to do.Now what they are trying to do is to postpone this election for any technical reason.

The provincial council that was postponed in 2017 is still not there. The provincial council was also postponed for technical reasons. This government is trying to run away without facing the public opinion. After the twenty-first amendment was passed, the government has another reason.
Mr. Nimal Punchihewa, Chairman of the Election Commission, said that if anyone tries to postpone the elections at this time, I am ready to go to court.
Now one hope of the government is to remove the Chairman of the Election Commission
There is a technical reason mentioned above for it. Through 21, the government is trying to do these two at the same time. I warn this country. One of the government’s wishes is to remove Mr. Nimal Panchihewa, who said that if the elections are postponed, he will go to court.

Last week, the media reported about an Iranian citizen, his name is Amov Haji, a 94-year-old man. According to media reports, Haji has not bathed in 54 years. Haji lived in Iran as a non-bather. The reason why he did not bathe for fifty four years was because of Haji’s belief that he would die if water fell on his head. That is why he did not put a splash of water on his body for 54 years. He was called the dirtiest person in the world. . This person died only in the bath.

Signed a document against postponing the election. The broadest political unity in the history of parliament was built out of it. We kindly tell the government that if the elections are postponed, we are ready to destroy the government with all the parties like they did to Haji. Therefore, the government has to find a way to postpone this in order to save lives. We tell the people that the election is not the main problem in this country. We know that this is a country with more serious problems than just the election.

This is a country where 12 million schoolchildren sleep fast. This is an island. This is a country where people are drowning in great economic pressure. We all know that the election is not a decisive issue for those sunken people. Within the last 30 months since November 2019, two presidents, three prime ministers have arrived in this country, and five cabinet boards have been appointed for thirty months. The changes that are being made without facing public opinion can be seen accordingly.

Ambassador Samarasinghe presents credentials to the Organization of American States

Twenty-first amendment to the constitution in effect from today (31).