The story of the Akurana Tsunami… 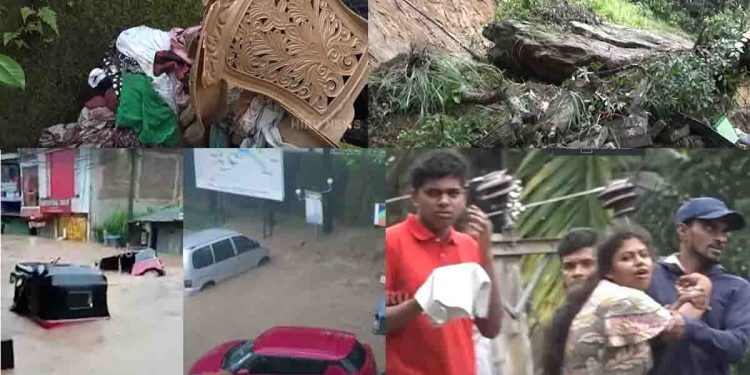 Jesus was born in a manger in Bethlehem from the womb of Mary, teaching the world the essence of peace. On December 25, Christians around the world celebrated Christmas to honour the miraculous birth of His Holiness, who sacrificed his life for the oppressed.

On that day in 2022, it rained heavily in every region of our nation. It took only a few hours for the reservoirs and rivers to overflow and flood the surrounding villages. In the Akurana neighbourhood of Kandy, it was reported that two children from the same family had perished as a result of the floods, which left many residents feeling powerless and distressed.

There was a dark mood that prevailed throughout the country on the last 25th, when this calamity occurred. The light that normally visible on a Christmas Day wasn’t there in the environment that day, may be implying the danger which is to occur. The Kandy district had been experiencing heavy rain since the previous night, and the Kandy railway station, highways, and other locations were flooded, disrupting all civilian activities. Along with the rain, two children from the same family who lived in the Charana Alavathugoda Dunuwila Doragamuwa Gramaseva domain were killed when an earthen mound near their house collapsed.

Because of the heavy rain, the three children and their parents stayed indoors, believing that there is more safety staying inside the house. Unfortunately, a large mound of earth unexpectedly fell on their house, due to a landslip caused by the rain. Entire family subjected to the tragedy, however incident took the lives of the two children named Ayesha Nisali Vitarana (18) and Sithum Saranga Vitarana (16). While the two children were killed in the landslip, destroying the house they were living.

The incident stunned the entire nation when it was reported by the media. A neighbour commented on the situation.

“I received the message on this incident at around 7:15 a.m. However, this calamity had occurred approximately 6:30 a.m. The youngest child of this family was saved some way. This child was alive when he was rescued from earth heap. I inquired with the parents about their other children. They said that the son and daughter were present in the house. When we lifted the earth, we discovered the legs of the daughter. We have to clear large heap of earth and trees to recover the son. He was dead even when we dispatched him to the hospital. Police arrive at that moment. It was difficult to transport them to the hospital due to the collapse of the mounds all around.

Despite the efforts of local residents to save the children, two children were killed in this accident. Malshi Vitharana’s 12-year-old daughter survived. She is being treated at the Preradeniya teaching hospital and he parents are safe the disaster management centre reported. The children’s father and mother, Lakshman Pushpakakumar (56) and Priyanka Nelum (44) Jayaweera, also receiving treatment at the hospital.

Only few clothes remained for this family in the end. The ferocious weather was able to take two children’s lives as well as everything they had worked for during their entire lives. How will they cope with the loss of their two children, whom they had cared for and nurtured for nearly 20 years, who died unexpectedly in front of their eyes?

The last rites of the two deceased children were carried out at the Dunuwila Edduawa Public Cemetery on the 27th, by the relatives of the deceased children, including local residents, Akurana Divisional Secretary Mrs. Indika Kumari Abeysinghe.

Many believe that the landslide was caused by illegal construction near Pigga oya. As a result, approximately 50 shops in Akurana town were inundated with rainwater. The Mahaweli Authority took steps to open the Polgolla Reservoir’s sluice gates to drain the large body of water. Although the property damage caused by this flood could be estimated in billions of rupees, the exact amount has yet to be determined.

The Department of Meteorology announced on the 25th that bad weather would affect the island, and it was also advised to refrain from activities related to fishing, rivers, and reservoirs in the announcement. This torrential rain, however, had the greatest impact on the Kandy district.

According to a statement made by the Disaster Management Center, 1,511 persons from 346 families have been affected by the heavy rains.

The unlawful development surrounding Piggaoya, according to the residents, is the primary cause of these and other landslides. According to them, the construction of structures that cross canals and obstruct the canal system has also contributed to the current state of affairs. These floods are also attributed to the unplanned construction of dwellings on both banks of the canal that passes through the city of Akurana, which impedes water movement. However, the locals also blame the authorities of not taking adequate action against the illegal projects.

26th December, marked the 18th anniversary of the Tsunami disaster, which killed thousands of people. In remembrance of that disaster, two people died and a large amount of property was destroyed in the flood that struck the Akurana area on the 25th. In Piggaoya, six vehicles were washed away, and three-wheelers and vans were seen floating in the water.

Many people comment on social media this as the worst flood in Akurana area. This is a message Madhu Fernando posted on his Facebook page.

Water has never flowed so freely. Nobody believes that no matter how much rain falls, if the places where the water flows are blocked, it will result in disaster. Who is to blame? The water monster has no idea of social status, has no fence or boundaries, no court cases.  Break down and go through its path if it is an easy way to go. The water monster is unforgiving. This is the punishment for people with brains acting like brainless people….’

This is not our country’s first landslide. Several of these landslides have now become common during periods of heavy rainfall. However, such landslides were rarely reported in our country a few decades ago. However, as the destruction of forest resources, illegal constructions, river and canal crossings, and other irregular constructions increase on a daily basis, the entire population must bear the consequences. If the authorities do not take strict measures to stop the environmental destruction, it will not be very long more disasters to occur.