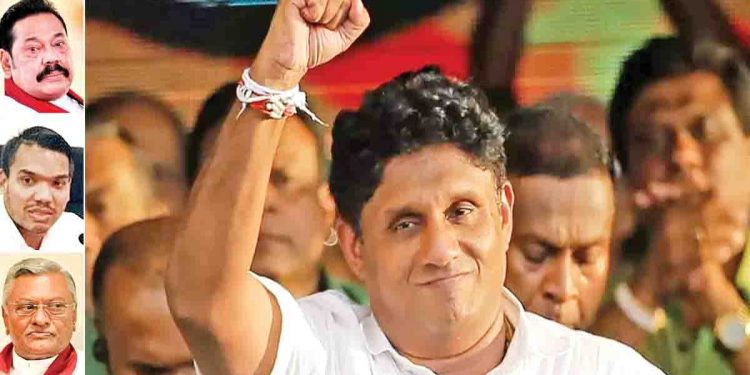 Thus, for the first time in history, the group representing the Rajapaksas has reached a level where no candidate can win.

However, losing even the Hambantota cooperative might jeopardise the Rajapaksa’s political future.

Sajith entered politics from Hambanthota . Rajapaksa’s home. He went there when UNP was zero. Novice  Sajith defeated the Rajapaksas for the first time. Sajith destroyed the state-repressed Hambantota Rajapakse camp.

Sajith’s UNP won Hambantota in the 2001 general election. Sajith Premadasa received 92,536 preference votes and Mahinda Rajapaksa 81,855. Even then, the youthful Sajith had showed the country the form of overcoming adversities.

If the two elections were held by simple majority method, under Sajith, the stalwarts of Mahinda Rajapaksa and Chamal Rajapaksa would have to stay at home. Sajith is clearly the other Rajapaksa.

It is good for the political future of the Rajapaksas to find out how the Rajapaksas who carpeted not only the main roads and side roads but also the roads leading to certain private houses in Hambantota were vanquished by Sajith. Mahinda Rajapaksa won every election from 2005 until 2015.

It is good for the political future of the Rajapaksas to find out how the Rajapaksas who carpeted not only the main roads and side roads but even the roads leading to some private houses in Hambantota were defeated by Sajith. After Mahinda Rajapaksa became president in 2005, he won all the elections held until 2015. His opponent was Ranil Wickramasinghe.

Not only did Ranil continue to lose before Mahinda’s elections, but the powerful United National Party was washed away. Except for one occasion, the United National Party had to experience the bitter taste of continuous defeat since 94 and it happened until 2015. However, Sajith was able to turn around a president who voted for more than 69 lakhs, and a two-thirds government that was formed by voting for nearly two-and-a-half years. That is the truth that many forget and many forget.

An Indian journalist named Prabhash K. Dutta of the Indian national newspaper Times of India wrote a wonderful article on 13.07.2022. The headline of the article was ‘6 Sri Lankans who overthrew the powerful Rajapaksa regime’.

She began her article by saying, ‘The largely non-partisan Sri Lankan protests that led to the downfall of Gotabaya Rajapaksa and Rajapakse politics were led by ordinary citizens who were fed up with the way their country was being dragged into an economic black hole.’

In another place it was written:

The journalist had reasons to write like that. Especially with the formation of the Rajapaksa government, the Samagi Jana Balawegaya started street fighting against the government not long after. It was led by Sajith Premadasa. At the beginning of the people’s struggle, Sajith always stood by the side of the strugglers while many political parties talked about it with derision. He gave them his support in practice as well. When some political parties talked down about the citizen’s struggle saying that such struggles are useless and that the struggle should be done by the political leaders, Sajith supported it without hesitation.

After that, many political groups came forward to claim the rights of the struggle, but the Samagi Jana Balawega and Sajith supported the struggle from the very beginning.

The end result of all this was the resignation of the President and the Prime Minister of the powerful Rajapaksa government. Looking at that, anyone can understand whether Sajith has played the role of the opposition or not.

Some laughed at Sajith saying ‘Sajith loves and fears’ because he did not join the Rajapaksa and get the Prime Ministership. But Sajith gave only one answer to those sarcastic words.

Sajith, who did not come forward to govern with the Rajapaksas, is winning cooperative votes all over the country. It culminated in defeating the Rajapaksas to such an extent that they could not get a single representation in Hambantota Cooperative like never before in history.

A hurricane is on its way ! The rain is expected to continue until next Tuesday! According to the Department of Meteorology!