The mighty Monarch of Sri Lanka who honored the slain king of his adversary. 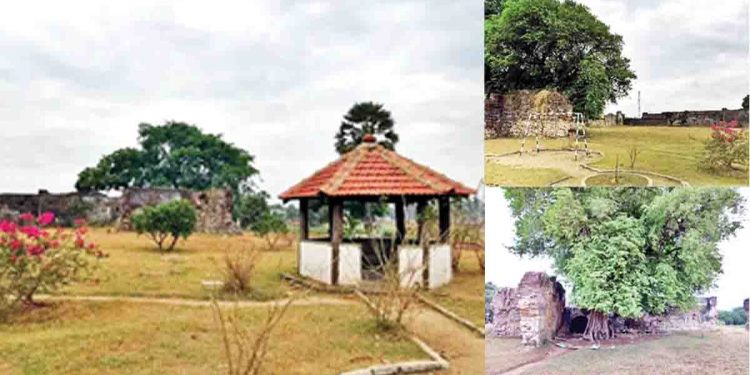 No one has seen the place where Elara fell dead from Dutugemunu’s sword, right? This story was written from there…!

It is their belief that the story of Elara, which goes along with the genealogy, originates not from the Chola dynasty of Uttara but from the Poonagari area. So this is the story of Ellala and the story around the green land called Poonagari.

The place where Elara fell and the place where his body later rested is still standing and the memorials of the past are still standing, ever since he was defeated and slain in face to face combat by the young Dutugemunu, the hero of the Mahavamsa. The annals of the Elara , an elderly but heroic Tamil king of the history. Bringing life to this heroic land. On that day, Dushtagamini cremated Elara in this glorious land in honor of his brave enemy.
This event is said to have happened two thousand years ago in 161 BC.

That is, the Chola prince ruled this land for forty-four years (according to the Mahavamsa) and during that period, a king named Dutugemunu was a person who had ruled ‘with justice spreading to friends as well as to the enemy’ and nowhere else in the chronicles is there such singular and unlimited praise for a ruler. And as mentioned in Deepavamsa, he ruled the state with unparalleled righteousness, avoiding the paths of desire, hatred, fear and delusion. ‘The clouds rained at night, and there was no rain during the day’. Even the very beauty of nature favored this righteous king.
It is not surprising that Dutugemunu, in the hour of his greatest triumph, wrestled with his conscience, immediately attended the funeral of his noble enemy. According to the Mahavamsa, ‘the two kings fought near the southern gate of the city. Elara shoot his arrow, Gamunu missed it. He shot his arrow at Elara. Elara fell there with his elephant. After thus winning the battle and uniting the nation under one rule, he marched to the capital with chariots, armies and horses and horsemen.

Drums were beaten throughout the streets of the city. He called the people and performed the funeral rites of King Elara. His body was cremated on the spot where it fell, and a monument was erected and worshiped there. Also, many people passing by this monument worshiped the monument and used to silence the music if they were playing.

An epitaph is said to have been erected near this monument which reads: As ‘in the future no man, prince or peasant, drummer or horseman on a horse will salute when they passes through this’.

Even though more than seven hundred years have passed since the Mahavansaya was composed, it wonderfully mentions a unique honor given to a Tamil king to this day. Historians have pointed out that Elara’s army even consisted of Sinhalese soldiers. Dutugemunu built a tomb for his enemy, He , named it the Elara Tomb, which according to historians later became known as the Dakkhina Stupa, a Buddhist shrine in Anuradhapura. However, Elara is still revered for his greatness in Sri Lanka.

The country’s northern naval installation was named Elara Naval Base after the Tamil King after being established in Karainagar on the Jaffna Peninsula in 1955. So, 67 years ago, the peninsula country’s premier naval installation was named after him. A statue was erected in memory of Tamil King Elara in Jaffna last week. Minister Devananda, who unveiled the statue of Elara along with famous kings like Pararajasekaran and Pandaravannyan who reigned in the north, still remembers the struggle against foreign invaders. King Pararajasekaran of the Jaffna Kingdom was even revered as a great physician who was an expert in indigenous medicine.

Once I went to see Uda Poo in Poonagari. This is another wonderful event. That is the Annals of Poonagari. The northern terminus of the A 32 road on Sri Lanka’s northwest coast, the town of Punareen or known as ‘Punakari’ in local annals is located on the southern shore of the Jaffna Lagoon.
It is not known exactly when Punarin was first inhabited by humans.

However, the strategic importance of this place was noticed first by the Portuguese and then by the Dutch mainly to protect their interests in Jaffna and guard against any possible invasion by the forces of Sinhalese kings or Vanniars.

It is timely to see how this northeastern coast of the island received attention in the colonial past, especially during the Dutch rule.
The Jaffna Peninsula is connected to the mainland of Sri Lanka by a narrow strip of land. Along with several islands, Mullaitivu district in the east, Mannar and Arippu in the west, and part of the larger territory known as the Wanni in the south, it was one of the administrative entities of the Dutch, commonly known as the Jaffna Mandate. Trade in the Jaffna Ordinance was centered around the main administrative city of Jaffna, where the Dutch built a fort on former Portuguese land.

The terrain of Yalpattinam was significantly different from that of other parts of the island, with many parts wide open to the waterfront either by sea or by lagoons. This geographical position made many parts of the peninsula easily accessible, providing a favorable environment for trade during the Dutch era.

The Portuguese suppressed the independent ruler of Jaffna and incorporated this kingdom into their Estado da India in May 1619. It surrendered to the Dutch in 1658 and to the British in 1796. Jaffna is the main city of the northern province of the island. Both the Portuguese and the Dutch, along with their possessions in South India, turned the region into a trading post where substantial profits were made from the sale of elephants, cotton goods, cinnamon, rice, betel nuts and salt. Their harvest was seasonal but created a significant market for South Indian traders. The Tutukorins of South India shared their positions along the Dutch Coromandel coast with their center at Alwathinegari, Manapar, Ponnakail, Kailpatnam and Transigare and north to Bampere and Kilkare.

(The Dutch having Tutucorin as their centre in South India divided their stations along the Coromandel coast to the south Alvatienegary” Manapar” Ponnacail” Cailpatnam and Trinsigare and to the north Bampaer asnd Kilkare) Documentary sources in Sri Lanka identify these South Indian coastal lowlands as ‘Inchiado’ during the Portuguese period and ‘Opposite Coast’ during the Dutch period as trade between the two places developed along the coast between Peduruthuduwa in the north and Kalpitiya in the south.

The capture and trade of elephants in the area was a lucrative business and the company in 1638 made a treaty with Kandy asking the King for help in expelling the Portuguese from the island. In 1682, the Dutch occupied the coastal possessions in the name of the Upland King, and the rest were entirely in the hands of the Dutch, so both sides found a truce. The king’s sovereignty was acknowledged by sending annual embassies to Kandy with various gifts and presents. One of the objects of this annual audience was to obtain permission to drive the elephants captured from the south and south-west overland across the Punar to Mannar and Kites.

Governor Thomas van Ree in his memoirs dated 1697 mentions that ‘Don Gaspar Nichechenaderayan Modeliar of Vanni, the master of fines, had been given lands in Ponnerijin for his maintenance, and that his hunters occupied the fields or gardens in their possession without paying anything. However, for revenue, India needed Ceylon elephants for three distinct purposes: war, temple services, and use as work animals. Therefore, these two elephant markets were visited by a considerable number of Indian Moorish traders from Bengal and Golconda to buy them.

The company earned an annual income of approximately 100,000 to 200,000 guilders from the elephant trade in the early 18th century. The other income-generating product was pearls and oysters harvested in the waters surrounding the Gulf of Kondatje, Mannar and Thalaimannar. Pearl banks in this area were in the hands of hired private traders.

The Dutch observed that pearl fishing in this region was like a lottery and gambling, where thousands flocked to this area, ignoring agriculture and even daily occupations. He said that not even an old woman is on her spinning wheel and everyone is engaged in this dangerous game in search of fortune beyond dreams. Therefore, Governor Daniel Overbeek in his memorandum dated 1743 proposed to take over the entire trade to the Company to (a) reduce the presence of strangers, (b) promote the Company’s cotton goods trade, (c) prevent men from neglecting their daily occupations. (d) To put an end to this gambling which stalls the business transactions of the Company.

He suggested that the company should deploy 25 to 30 boats for this purpose and improve the industry as is happening in Tuticorin. Coir was a much sought after commodity in the South Indian textile industry and hence considerable attention was paid to its collection. The Company always intended to maintain a monopoly of the betel nut trade and took every possible measure to prevent private trading and to prohibit the entry of strangers into this lucrative trade.

Coir was a much sought after commodity in the South Indian textile industry and hence considerable attention was paid to its collection. The Company always intended to maintain a monopoly of the betel nut trade and took every possible measure to prevent private trading and to prohibit the entry of strangers into this lucrative trade. Dutch Governor Daniel Overbeek observed that Chitties and Moors engaged in private trade, exchanging this commodity for rice and other necessities, resulting in less stock in the company’s stores.

A notice issued prohibiting this illegal private trade stated that ‘an eagle eye is needed to guard against these evil practices’. Punareen is historically important because of its fort which was built late during the Portuguese rule and when it was taken over by the Dutch. Their renovation did not make major changes but maintained it in good condition during their time. According to the Dutch plan of about 1770, it was square in shape with two bastions at opposite corners. Each side wall was about 30 meters. In 1700 it was in good repair, but by the 1780s it was in ruins, a garrison of only a few men.

Later, in 1805, it was converted into an inn by the British. W.A. Nelson in his book ‘Dutch Forts of Sri Lanka’ in 1984 reports that ‘much of the fort structure, very mature, still remains combined with the remains of the lodges’. After the upheavals in the north since 1983, Punareen was a ruined site and now stands desolate next to the A 32 road.

The semi-final lineup for the T20 World Cup

Top RDA officials testify before the Bribery Commission about the elevated highway project.