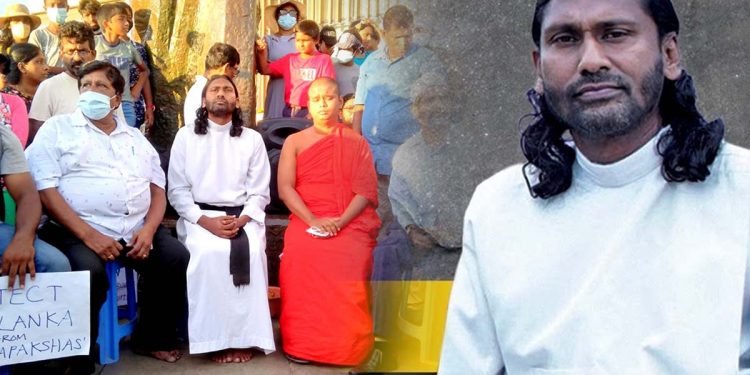 The news that a special police team raided a church in Ratnapura in search of Father Amila Jewantha was published in the media the other day.
What is the reason why the police raided the church to arrest a priest?

According to the government, Father Amila Jeevantha is an anti-state terrorist.

He led several illegal meetings during a protest rally against the government last month.
Another most serious accusation is that the father joined the stubborn youths in the struggle to damage the public property of the country.

According to the security forces, the court also imposed a travel ban on Father Amila Jeevantha, who is said to be directly involved in the above riots, in late July. The police raids happened two days after the court of law imposed the travel ban.

So a living anti-state terrorist as you say?

The allegation has not been confirmed yet. Who is this Father Jeevantha who really appeared throughout the struggle and did not give up the struggle? What was he doing?

Father is a Christian son of God who has joined hands with the strugglers in brotherhood since the beginning of the active struggle. He is known by the revolutionary name of ‘Father of Struggle’ by the youth of the struggle and those close to the struggle. His full name is Amila Jeevantha Peiris. Father Jivantha, who was born to parents who were strong members of Kitu Dana Pubudu,

Went to the monastery for the monastic life and first spoke for the oppressed people from the age of one. Along with that note, he had also written the following story for his priest son.

Do you remember that incident, son? Even if you forget it, I won’t forget it… Then you are 16 years old. A neighbor’s mother came to ask for a pillow to put on the head of the sick man. When that mother begged helplessly asked you a pillow, you came from the room and gave her the pillow you were sleeping on. Since then, there is no pillow in your bed. You had a very kind heart. Your mother and I were most proud of that beautiful heart…

People with such kind hearts cannot become terrorists, my son…! You went to Rome to study psychology and left everything behind to speak for the poor. Be useful to the oppressed people. Those who accuse you of being a terrorist don’t know about you yet.

You are not a terrorist, my son, just because you don’t have a beard or a haircut… Then Jesus must also be a terrorist…’

The post that his father had released on behalf of Jeevantha had received a lot of emotional comments. Regarding that sad post,

‘Stop the smear campaign against the Father of the Struggle…’

‘Father Amila Jeevantha is a savior who raises his voice for the oppressed. Don’t post false ads without knowing about him properly…’

‘Don’t touch the father of the struggle…’

Father Rajpriar, a contemporary friend of Father Amila Jivantha, made the following statement.

He never responded to the media that launched smear campaigns against his participation in the struggle. He bore it all with a smile and carelessness.
The only thing he did not like in the struggle was caste and religious differences. Unarmed in the face of struggle, his only weapon was unconditional compassion and endurance.

Regardless of the balance of good and bad, Father Jivantha did not give up the struggle. When the Sri Lankan land was being destroyed by Rajapaksa’s frenzy, this father showed his service without flaws by rubbing his shoulder to shoulder with the members of the struggle.
Father Jiwanta’s service for the rights of the people during the struggle is invincible. In him I see a living saint. I see it as a great event that he did not leave his fighters alone even in the midst of tear gas attacks and violence…’

A university student Mr. N. Gunawardena had left such a note on his face book for this father.

The present Ranil government has started to brand him as a terrorist when the strugglers like the struggle lovers as well as lay Catholics and other common people see Father Jiwanta as a real hero.

However, some people who said that Father Jiwantha would win with the struggle until Gotabhaya left have started to see things differently after Ranil Wickramasinghe became president.
In other words, when Ranil wore a suit and flew in an aeropplane planned to borrow for Sri Lanka and mortgage the country,some people began to view the father of the struggle as an enemy.

But Ranil’s loan deal has not yet been sealed. There is no end to the verses made by the father of the struggle.

However, one has been confirmed. It is that the henchmen of the Ranil government are preparing to launch an unfair attack against the father of the struggle.