The international community charge against the attack to the protest !… 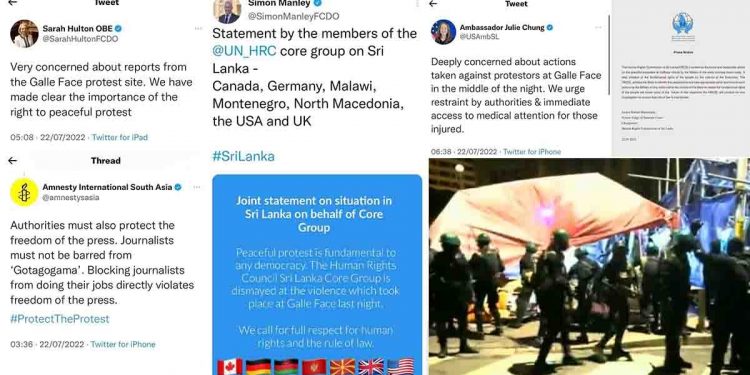 The despicable attack which turned the morning dewdrops into red on the green grass carpet of the presidential secretariat compound in Galleface and decapitated the heads of the unarmed fighters has gone down in history as a blood stain. The thugs, who were sleeping crouched in small tents without even a piece of cloth, chased them from the premises of the Presidential Secretariat by beating them up and down.

The activists were to chased the young men and women who were running in fear for their lives outside the premises of the Presidential Secretariat were attacked mercilessly. The tents built outside that compound were demolished, showing the world that no space is given to antigovernmental viewpoints.

Ranil Wickremesinghe’s government launched this military attack when the protesters were about to leave the Presidential Secretariat. They had decided to leave the acquired public property due to warnings given by a number of prominent parties, such as the Bar Association, and they were ready to leave the premises of the President’s Secretariat by 2 pm on the day (22) of the attack

.
Attack to the unarmed protesters who had noticed of their leaving the aquired property was not a mere coincidence but a fully planned attack. Their aim was to warn not only to the remaining protesters but also to the future protesters and also to the society atlarge about their forthcoming viloent rule.

However, Ranil Wickremesinghe’s government must understand that this is not a generation that can be intimidated by threats or killing. They came out against the Rajapaksa regime that was terrorizing the country. Ranil Wickramasinghe, who is a lone elephant in the parliament, is not a big threat to this young force that challenged such a regime.

The armed group that came to attack the crowd not only did so to the protesters but they even showed their merciless act upon the local as well as international journalists. They chased and attacked the journalists and also the crowd who just arrived to the struggle ground. Among the people who were hospitalized were two BBC journalists .However, BBC. News service world wide broadcasted the image of Sri Lanka’s new president by airing the brutal attack all over the world.

This attack was called as a cowardly attack by the Sri Lankan opposition leader . The opposition leader says that the world is getting a wrong picture of Sri Lanka due to this terrible attack. This statement of the opposition leader was quoted in international media including ‘The Hindu’ and received lot publicity for word over. The attack on the activists was condemned more seriously not in Sri Lanka but internationally. International organizations and government leaders immediately condemned this shameful attack and commented about it which can be seen even a week after the attack.

Condemned by the international community

Sarah Houlton, the British High Commissioner in Sri Lanka, condemned the attack on a Twitter message before the blood of the fighters dried up. ‘Galle face has got very close attention to the reports from the protest site. We have clearly pointed out the importance of the right to peaceful protest,’ she said in her tweet a few moments after the attack.

The United Nations, which has been monitoring the situation in Sri Lanka, immediately condemned this attack. The organization’s resident representative, Hana Singer, issued a statement condemning the violent attack by President Ranil Wickremesinghe. In a post on her Twitter account, she said that the United Nations is very much concerned about the use of force to disperse the Galle face protesters.

Not only that, she reminds the government that journalists and those who appear to protect human rights have the ability to monitor the protests and their activities, and emphasizes that no party should obstruct it. Also, she had used her message to remind the government that by trying to suppress the right to hold peaceful protests, the country’s political and economic instability could get worsen, and that the only way forward is to reach a peaceful solution in cooperation with the people.

The European Union also says that it was shocked by the attack on the Galle face protesters. In a statement, they said that the freedom of expression was instrumental in the transitional political changes in the country, and that it cannot be thought that blocking it suddenly will help to overcome the economic and political crises that the country is facing.

GSP concession was granted back again in 2017 when Ranil Wickremesinghe was the Prime Minister. Therefore, the government should think seriously about this at the moment.

The US ambassador to Sri Lanka, Julie Chung, did not stop only with issuing a statement. She met President Ranil Wickremesinghe and expressed her dissatisfaction to his face. After meeting the President, the Ambassador, who releasing a message on Twitter, says that she expressed her concern about the state violence launched against the peaceful protesters to the President Ranil Wickremesinghe.

The American ambassador says that she reminded the President of Sri Lanka that this is not a time when the government should launch its repression against the citizens, but a time where efforts should be made to win the people’s trust.

Norway’s Ambassador to Sri Lanka Trini Eskiddal said in a Twitter message that she condemns the attack on the peaceful protest in Sri Lanka where even injured lawyers and journalists. She demanded that the rule of law be re-established and the people’s right to peaceful assembly and expression be upheld.

The New Zealand Embassy in Sri Lanka also issued a statement saying that every society must have the right to express opinions and assembly.

The United Nations Human Rights Office also issued a statement saying that it was shocked to hear that the government used military force against the protesters. They further say that the deployment of security forces to disperse the protest ground near the President’s office is an unnecessary use of force.

At the United Nations Human Rights Council, a core group on Sri Lanka, Canada, Germany, Malawi, Montenegro, North Macedonia, the United States of America and the United Kingdom issued a joint statement saying that they were alarmed by the state violence unleashed on the Galle face struggle, and that they respect human rights and the rule of law.

That the collective of those countries are requesting from Sri Lanka,.due to the Galle face attack, which provide is a testimony to the accusations made by the pro- LTTE organisation parties and the Tamil Diaspora against the Sri Lankan Army, Sri Lanka will undoubtedly face an unprecedented challenge at the World Human Rights Conference to be held next September.

The most serious situation related to the Galle face attack arises during a time we har in negotiation with the the International Monetary Fund. Commenting on that, Deborah Brottingham, a professor at John Hopkins University, says that the International Monetary Fund will not provide credit facilities until Sri Lanka resolves the chaos in its country.

She says that when there is a crisis in the country, the International Monetary Fund cannot give billions of dollars in loan relief to the government and the people are struggling against the government’s reckless financial management.