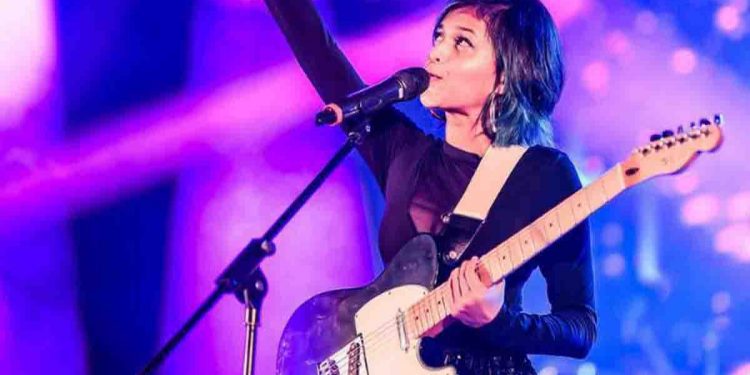 There are artists in almost every corner of the world who have conquered life in the face of unexpected luck. In our little country, called the Pearl of the Indian Ocean, which is like a tiny dot on the world map, there are lucky ones and unlucky ones. If you try to write the names of all of them as a list, it will be a bit confusing. So let’s get to the point. The story that is to be told is about a young girl who was lucky enough to have her name in gold all over Bollywood.

Her name is Yohani Diloka de Silva. There is no way for anyone to forget her. Yes. This is the stylish ‘Kottu Mee Girl’ who sang strange tunes while wearing a short blouse that showed her navel over tattooed jeans.

After that, little by little, ‘Kottu Me Girl’ became ‘Manike My Heart Girl’. When she signed a contract to sing on a concert stage in Bollywood, everyone told her, ‘Ah… that gem is the girl in my heart…’. However, no matter how popular the song ‘Manike Mye Hita’ was, even though she was invited for several concerts on the stage of super Bollywood, no one in our country tried to congratulate Yohani and cheer her in those days. Even if a TV drama actress made a potato curry or went to the supermarket, our audience, who put tens of thousands of comments and likes on those posts all over Facebook, did not spend even a single second to give a like for Yohani. Not a single heart sign was noted. It wouldn’t take a minute to attach a seven or eight character comment.

If someone asks why it happened, it is almost impossible to give a clear answer. I remember that even though the face book was on the sidelines, no print media came forward to reserve space for a half-page conversation for Yohani, the new yohani who became popular.

During this time only ‘Mawrata’ newspaper recognized Yohani. It was the first to publish a back page tabloid picture of this new song star. Only Mawrata questioned why show hatred to yohani from face book community.

It is impossible to say. But it can be said that there nothing new heard form Yohani.

Yes, in retrospect, it is true. Where is that beautiful kottu mi girl or ‘Manike Mye Hite girl’ who sang a Sinhala song to Salman Khan , Yohani, who became popular. Has she evaported to the thin air like a fiz of a gass drink bottle. Why is there not much noise these days?
I was hoping to do some new creations. All the preparatory work had been done for that. But the country’s situvation is not suitable for such a thing now, so all plans were postponed for a while…’

Yohani had given reasons for his silence on social media with such a note. She had sent that note a few months ago, that is, when the Galle face struggle was very intense.
There was some distaste for Yohani da Silva among the strugglers. They Disliked her, it is somewhat of a black mark. Could there be any connection between Yohani’s silence and that dark thought?

Yohani, Gotabaya Rajapaksa and other Rajapaksa had a kukus called Awadanavado among the Heiniyat strugglers. One of the indirect reasons for that was the hashtag Yohani created based on the foundation he built with some group called “Recovering Sri Lanka”. ‘I am for Sri Lanka’ was written on the black and white mixed hashtag. Yohani had even created videos to seek dollars for Sri Lanka through the foundation based on that hashtag and to call the international community about Sri Lanka’s economic collapse.

If Yohani did so with such dedication, what was the above-mentioned hitch in the minds of the activists about the hashtag ‘I am for Sri Lanka’?

The activists accused Yohani in this way.

Even though Yohani says that she is struggling to recover the country by finding dollars to save Sri Lanka we see that there is no basis in her actions or mission. Even the hashtag ‘I am for Sri Lanka’ is not impressed by us who are leading the struggle. The reason is that the current government has used the said hashtag for some of their propaganda work. On the other hand, Yohani and her team’s mission based on that hashtag does not imply supporting Agaralaya and condemning the government’s system of governance. From what Yohani is doing, it is clear to anyone that she is supporting some propaganda program in favor of the government.

Through all those facts, we can see that Yohani has slapped the struggle by showing her loyalty to the government…’
That is the story that the strugglers told publicly about Yohani in those days.
Did Yohani play such a double game as the strugglers had said?

The campaigners are completely wrong. The hashtag ‘I am for Sri Lanka’ was created for the foundation of me and those who came to support my program. I wanted to support the mission of Sri Lankan fighters in a different way. I followed this method because I thought that I could do some mission through my foundation rather than coming to the struggle and taking photos with the crowd. Nothing has happened to me to support Gotabhaya Rajapaksa or the Rajapaksa people. Neither I nor anyone in my group has shown any loyalty to the government. We are not involved in politics. We have not taken anything from them.

When you go to a festival somewhere, you meet various politicians. You have to talk to them. Even if he took a selfie while talking, someone else took a photo of that scene and released it to the media, but it cannot prove that Yohani de Silva is loyal to the government…”
That is how Yohani had responded to the accusation made by the activists through a video. But nowhere was it mentioned that the activists accepted her innocence. Their basic thought was that she could have come and gone for a day as a young artist to join the struggle

As a matter of principle, I do not deal with politics. They are not actively involved in politics. I didn’t face the struggle publicly because I don’t understand politics or expressing political opinions. But I say this publicly. The suffering of the people of this country and all of you who are with the struggle is my suffering too. I am among those who are saddened by the destruction that politicians have done to this country. I am among those who are calling for a new leadership. Your struggle is my struggle. Neither I nor my team will ever try to save our skin or do anything against it indirectly…’
Yohani videotaped the statement and released it all over the social media to erase the black mark that has arisen about him in the strugglers.

No notes were published anywhere about it.

There is no other evidence to show that this is the case, except that Yohani herself get acquitted .

Does anyone think that Yohani was afraid of the strugglers when she folded up all his new creations and kept quiet for a while?

There is no clear answer to that either. Yohani’s answer for himself was based on the text. That is the reasons given. The fact that not every artist is willing to create a new work today.

Could it be that there are people who think that Yohani, who was a ballad style girl, could not have appeared in front of the struggle even for one hour, no matter what kind of ballads she told?

Why not. There may be people who think so.

You know what? Shihan Mihiranga and Dinakshi Priyasad dressed in black for a day and came to the struggle. That is not after studying politics or reading books about politics.

As a similar policy, great artistes like scholar Nanda Malani who did not give a hand to politics also came to the struggle. in white and sang a song because there is no party or color difference in the struggle.

Looking at it like that, it is not surprising that one would think that the reasons given for not joining Yohani’s struggle are not valid.

To put it simply, if this Kottu Mee girl, who tells sweet stories to feed Kottu Mee to a thousand of people, could have come to the struggle. By this she could have proven her contribution, singing a song lightly. There may be people who think ‘I am for Sri Lanka’ is more good.

Anyway, all of it is thing of the past now. The struggle has also been put on hold. What will Yohani’s latest move be in the middle of all that?

A new song, a brand new cover, a youth-tingling lyric… it doesn’t matter.

Yohani, who was in the middle of a struggle among the strugglers, ‘Mawrata’ wish yohani the success the as it did at the begining.
All the Best yohani Continue as it is…..