The Freedom People’s Assembly’s policy framework will be unveiled next Sunday in Colombo. 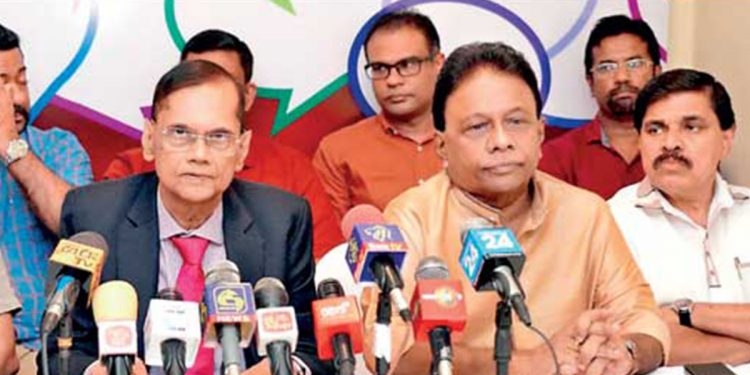 Mr Dallas Alahapperuma said that the policy framework of the Freedom People’s Assembly will be unveiled in Colombo next Sunday.

At the press conference held in that regard, he said:

“Professor G. L. Peiris has extended an invitation to you and the country in connection with the opening of the leading concept papers of the Sankalpa Janata Sabha at the Bandaranaike International Conference Hall on Sunday.

At the end of this discussion, we have decided to give the opening invitation to you, journalist. What are we going to do in this country?

It is said that a political crisis has arisen due to the economic crisis, but it is not without truth in both of these that we are the youngest group to enter politics in this country. Unanimously decided. Leaving aside the conversation of who came first and who came after us, we understand that this pair of crises is dependent on each other and our vision about the political meaning and the economic crisis as a policy framework as a conceptual framework or we say two framework documents.

We have decided to put it before this country. That is why we invited you. This is only a discussion paper and not a comprehensive document, so we should not take this and question whether this is the policy. We make an open invitation to the country’s academics and the general public of this country to further nurture and improve the policy frameworks we are presenting, and we have decided to take forward this discussion with the country and at the end of the various arguments put the perfect papers before the country. This is the world’s advanced and good times, and the answers to the problems are not solutions without them.

But there are answers to the problems that seek solutions. There are no unanswered questions, but there are no solutions to the problems. Therefore, as a political group, we decided to say what solutions to these problems are ours, to discuss with the public and put them before the country. It is the other side of this. If we look at 17 major elections in this country since 1948, what has happened in these 17 elections? These 17 have been used to win elections based on a particular issue of time or race, religion, language, or regional caste. Here we are unveiling our policy series with the most beautiful titles.

The policies presented so far or the future plans If you put together the policies presented and write one book, the name that fits that book is modern home decoration. It has been done in every election since history. Going further, we are making this proposal from that and as Prof. Peiris said, we have invited all the people representing the opposition in this country to be stakeholders in this regard. Therefore, the difficult path we have chosen is easy to flow down the river with garbage, but as the Freedom Janata Sabha, we We have chosen a difficult challenge of swimming uphill without getting tangled up with garbage.

That is where we are looking for solutions to the problems that answer each of these questions. Therefore, at this moment, we invite you to write the following: this is our political policy framework and economic policy framework. This is called a preface to freedom. With respect to the country, finally, professor would like to explain one more small matter Mr. G. L. Peiris and Mr. G. L. Peiris said that there are big discussions about holding the election and not holding it.

Friends, we want to emphasize the point of why this is being done. Let me give one example. If anyone can challenge, when will the proposal to increase the number of members of local government bodies or MPs from 8000 to 4000 be presented? The sad thing is that on October 17, the General Treasury made this request to the President’s Secretary and said that it should be reduced to eight thousand and four thousand because it is a waste of money.

In the final analysis, all of you who represent the government will be in hiding.

In the Polonnaruwa district, malnutrition among children under the age of five is on the rise.

IMF agrees to give 4.5 billion dollars to Bangladesh!