The Family tree that swallowed UNP, SLFP and Pohottuwa 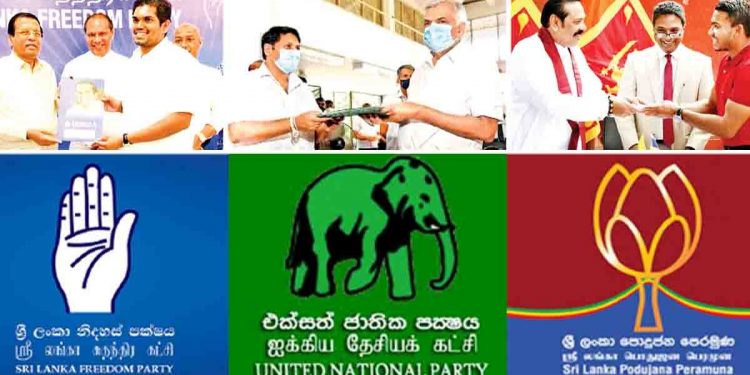 The inheritance of occupation from father to son is said to be a feature of feudal society. The feudal society of Ceylon, which was closely tied to traditional social characteristics such as traditional jobs and caste division, began to change with the visit of the Portuguese to Ceylon in 1505, and this situation was especially visible in the lowland and coastal provinces. With our accession to the British crown, the collapse of this feudal society accelerated. However, while the whites gave Sri Lanka dominion independence and gradually left the country, the dark-skinned whites continued to try to inherit a certain job from father to son. That job is politics.

It is not an exaggeration to say that Sri Lankan politics is a joint venture that has not yet escaped from the family background. Well known fact is that the crown princes of almost all mainstream political parties representing the current parliament are the children and brothers of the current leader. Start this discussion about familyism in politics or political families with the United National Party, which celebrated its 76th anniversary this week seems very timely.

When the Ceylon National Union became the United National Party, its leader was D.S. Senanayake. The Senanayakes, whose political activities were centered around the Bothale Valley, were wealthy from the graphite industry and the Renda business. The first prime minister of independent Sri Lanka is D.S. Senanayake. After the unexpected death of DS, his son Dudley Shelton Senanayake took over the leadership of the United National Party as well as the post of Prime Minister of the country.

Since Dudley was very young at that time Bandaranayake who was dreaming of becoming the Prime Minister of Sri Lanka after becoming the leader of the United National Party was shattered. Therefore, he is left the party against the familyism of UNP. Bandaranaike, who left the UNP and Hambantota Don Alvin Rajapaksa,too followed him, later both created two separate family trees in politics.

Dudley dissolved Parliament shortly after assuming the Prime Minister ship. Then the general election was held from May 24 to 30, 1952, and Dudley won the elections and became the Prime Minister for the second time. But Dudley resigned due to the 1953 hartal called by the Samajwadi Party, handing over the Prime Minister ship to his brother-in-law Woozer John and went home. Sir John was married to DS sister Dudly’s paterenel aunt’s daughter Effie Dial Bandaranayake. DS’s sister was Maria Frances Senanayake who was married to Frederick H.Diaz Bandaranaike. Accordingly, the Bandaranayakas, Senanayakas and Kothalavalas are relatives.

Dudley Senanayake, who held the office of Prime Minister of Sri Lanka three times, died a single man. Therefore, there was no child to hand over the inheritance after him, but after Dudley’s death, another Senanayake came to the Parliament representing the seat of Dadigama. He is Rukman Senanayake. Ruckman is the son of Dudley’s brother Robert Senanayake, grandson of D.S.

But with Dudley’s passing away , it is not Senanayake who will take the helm of UNP, but it was JR. Jayawardene. Son of JR is Ravi Jayawardene. But he did not enter politics.

When JR retired from the leadership the party leadership was assigned to Premadasa. In fact, the leadership of UNP was handed orver to premadasa by JR when it became impossible not to do so. . Anyway, when President Premadasa died in 1993 in a bomb attack by the LTTE, Sajith Premadasa, the next member of the Premadasa family, had not entered politics. Hence, Sajith’s political journey took a slightly different form. Sajith, who started his political journey in Hambantotan amid Ranil’s opposision, today leads a separate party and holds the position of opposition leader in Lanka.

Premadasa’s successor was President D.B. Wijetunga. Wijetunga lead the leadership of UNP for a short time, it was given to Gamini Dissanayake. Gamini is a member of a political family. His father Andrew Dissanayake was the Minister of Shipping in the Bandaranaike government in 1956. But Gamini came to politics from UNP. His elder son Navinda held a ministerial position representing the UNP and was an aspiring party leader. The other branch of the Dissanayake family tree is Mayantha Dissanayake and he is a S.J.B. member of parliament. Naveen and Mayantha’s mother is Shrima Dissanayake. After the assassination of Gamini Dissanayake during the presidential election in 1994, she ran for the presidential election. Such is the story of the Dissanayake family tree.

After the sudden death of Gamini, the UNP is once again put into familyism. Ranil Wickramasinghe became the next leader of the party. Ranil is JR’s nephew. The relationship between the two is written a little more loosely because it is a must-know story. Like Ranil, JR. They also come from Tudugala family, the largest political family tree in Sri Lanka. Although the earliest members of the Tudugala family belong to the Tudugala area, which is not far from Matugama, there is historical evidence that the family served the King of Kanda Udarata.

It is said that in the year 1659, one of the group that went to arrest Robert Knox, an English sailor, a soldier named ‘Tudugala Tennakoon’ was in that troope of soldiers. The modern story of the Tudugala family, which has such a long history, begins with Don Philip Wijewardena Mudali. He became very rich by providing construction materials to build modern Colombo. He married to Helena Weerasinghe. After marriage, she became Helena Wijewardena and played a leading role in the construction of Kelani Viharaya.

DR Wijewardena’s fourth child Ranjith Wijewardena married Ranjani, daughter of Robert Senanayake of Bothale Walavva. Ruwan Wijewardena, who is making suits to become the next leader of the United National Party, is the son of the two parties, and he is Ranil’s cousin by blood. (Ruwan Wijewardena is the son of Ranjith, who is Ranil’s maternal uncle.) Accordingly, the Wijewardenas, the Senanayakes, the Jayawardenas, and the Kotalawalas are all relatives. From that point of view, Ranjan Ramanayake’s story that ‘they are all friends’ is exactly right. (That story is like a short equation for this long article)

Anura Bandaranaike was the crown prince of the Bandaranaike family. He represented Parliament for a long time and held the position of speaker and various ministerial positions. But being unmarried, he could not give a prince to his descendants. Chandrika, the daughter of that family, also held the office of Prime Minister and President of the country twice. Although her son has not entered politics, several parties are trying to call him for it.

His brother is George Rajapaksa. He was the Member of Parliament for Mulkirigala Constituency during 1960-76. After his death in 1976, Lakshman Rajapaksa contested the by-election and was again elected to Parliament in 1976-77. George Rajapaksa’s daughter Nirupama Rajapaksa also entered politics and represented Parliament. She was the one who invested the money in the controversial Pandora papers.

The second branch of the Rajapaksa family tree, Don Alvin Rajapaksa or D.A. Rajapakse. He is DM’s younger brother. 1947 D.A. Rajapaksa later along with Bandaranaike initiated the creation of Sri Lanka Freedom Party. His son Percy Mahendra entered politics as Mahinda Rajapaksa. Having held the office of President twice, he still represents the Parliament. His elder brother Chamal and younger brothers Gotabhaya and Basil are also involved in the administration. Chamal Rajapaksa’s son Shashindra Rajapaksa also represents the Parliament, but Namal Rajapaksa will be the crown prince of that generation. He is consolidating his position by representing his father in festivals and councils.

The Sirisena family is the latest to join the Sri Lankan family politics. Former President Maithripala Sirisena is preparing his son Dham Sirisena for the crown after him and he is already started as the Polonnaruwa West S.L.F.P organiser.

After Philip Gunawardena, who is considered the father of socialism in Sri Lanka, the party’s leadership was taken over by the eldest son Dineshta. Philip’s other sons, Geetanjana and Indika, also were ministers . One of his brothers, Prasanna contested from UNP and became the mayor of Colombo. Dinesh has brought in his son Yadamini in politics to succeed him. Even now, he represents the People’s United Front and a MP in the People’s United People’s Government. Former Prime Ministers Ratnasiri Wickramanayake as well as D.M. Jayaratne also brought thier sons Vidura Wickramanayake and Anuradha Jayaratne into politics.

It is not that those who do politics with the family are not absent among the Dravidian political parties. From 1947 to 1960, G.G. represented the All Ceylon Dravida Union. Ponnambalam brought his son Kumar Ponnambalam into politics. He even contested the 1982 presidential election and later was shot dead by a terrorist and today his son Gajendra Kumar Ponnambalam leads the All Ceylon Dravida Union and represents the Parliament.

Plantation kingmaker Soumyamurthy Thondaman brings in his grandson Arumugam into politics as his successor. After the death of Arumugam, that crown is now owned by his son Jeevan Thondaman.

The word ‘family tree’ used in the Sri Lankan political dictionary in a book issued aimed at 1977 elections. It was about the way the Mrs Bandaranayake’s cousins ​​shared their positions during the day. It is said that the book was printed by Vikrama Weerasuriya. Later, he held the position of Secretary of the Planning Implementation Ministry, and married to Gamini Dissanayake’s sister, Rohini Dissanayake. Accordingly, he is Andrew Dissanayake’s nephew as well as Gamini Dissanayake’s brother-in-law. He is also the uncle of MPs Mayantha and Naveen. That means Wickrama Weerasuriya, who printed the family tree book, is also a branch of the Dissanayake family tree.