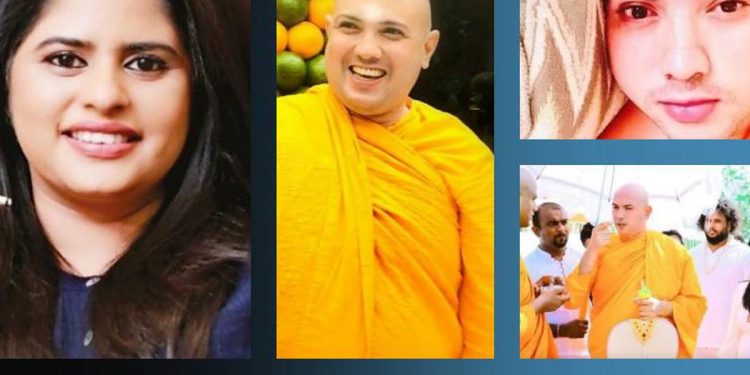 Thilini Priyamali, the owner of the Thiko Group, who was arrested by the Criminal Investigation Department for aiding and abetting a businessman to defraud a businessman of 750 million rupees. The department said yesterday (02).

When the Magistrate inquired how he intervened in this incident, the police said that when the money is taken, the owner of the money will receive a message from this Thero said to be given through some spiritual power known as ‘aruda’, which the businessmen have been told to invest the money in this particular company. A complaint filed by the CID and D N A sirisens against Thilini and Borella Siri Sumana charging of defauding Rs 43 million too was called in the open courts.

The Criminal Investigation Department told the Magistrate that investigations revealed that Thilini Priyamali had sent text messages to the said Thera at the time of this ‘Aruda’ happens.

The police stated that the investigations revealed that various businessmen have been motivated to give money to Thilini Priyamali. The busnessmen were encouraged to invest with Thilini by saying that it is good to invest here, not only but also by giving blessings .

The Criminal Investigation Department also said that it was revealed that this business has been run as a new business asking businessmen to come and bless their money.

Here, Mr. Dasun Nagashena, a lawyer, said that the Thero has even donated a kidney at the age of 18. He also said that he will bless to any activity.

It is stated in the B report that there was an agitation to give money.
lawyer,

It is said that pork was also given to Buddha.

The Central Bank is conducting an investigation regarding foreign currency. In relation to the complaint submitted by the business complainant named Abdul Kamal Hasan, Thilini Priyamali’s boyfriend Isuru Bandara’s home in Pirimathalawe was searched. 40 pounds of gold and 30 lakh rupees were taken into custody by the Criminal Investigation Department. It is also requested to issue an order to the Gems and Jewelery Authority to test the gold. The preliminary investigations are not over here.

This is not the right place to discuss professional ethics. There is no jurisdiction to issue orders regarding violations of media ethics. Avoid bringing items related to their recording in open court despite court orders. The court sergeant is ordered to investigate the matter.

My client has not interfered with the investigation. Evidence is not hidden. Lord, she has made statements even while in prison. She is asking to be released on bail.

Three mobile phones have been found in her custody on three occasions while in prison. Don’t they hinder the investigation? Complaints have been received about the concealment of evidence and threats to conceal evidence.

lawyer,
She has pleaded not guilty about the mobile phone. President’s counces Mr. Sarath Kongahage, who appeared for the second suspect, Isuru Bandara said, money has taken from the custody of my client’s mother. His parents are important people. Father is a seaman. Mother worked as a teacher. A romantic relationship does not come under criminal justice. The gold was taken and tested. They even gave a guarantee that they were not gold. Within minutes my client’s statement was broadcast in the media on the 6.30 news. Who gives out these? The Criminal Investigation Department strongly denies it, sir. The second suspect introduces the complainant Kamal Hasan. He introduces Thilini Priyamali as his wife.
lawyer,

President’s Counsel Mr. Maitri Gunaratne spoke about Janaki Siriwardena. The other side of the story was not spoken. It was Janaki Siriwardena who was sent during President Mahinda Rajapakse’s time along with Sajin De Vaz Gunawardena to fetch 500 million dollars from President Gaddafi. In all these incidents, the real stories are hidden he said .

After listening to all the facts, the magistrate ordered that the suspects be remanded until the 16th. –

Saliya opposes an ex parte move on a private plaint.