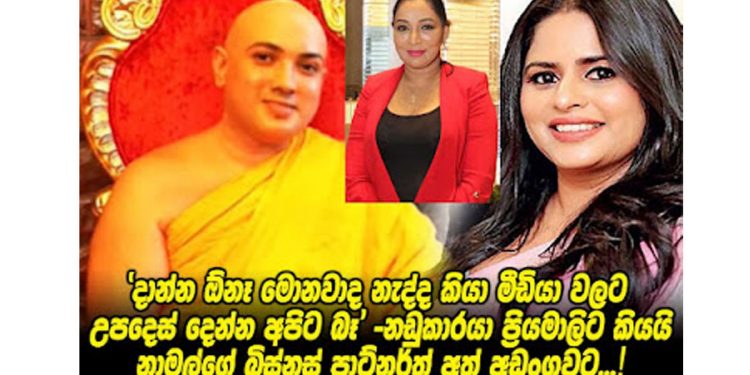 Colombo Fort Magistrate Thilina Gamage recently (2) ordered that the owner of Thiko Group Limited, Thilini Priyamali, her business partner Isuru Bandara, and Reverend Borelle Sirisumana Thero, who is said to be a criminal accomplice, be remanded until November 16.

They have been arrested in connection with a case of defrauding money of about three billion rupees from businessmen.

First, Thilini Priyamali and Isuru Bandara were presented before the magistrate through Skype. The magistrate rejected the bail plea of ​​the accused.

It was revealed that a businessman, Caram de Silva, had come to the temple with Bandara. During such trips, this monk pretends to be a loser and asks the businessman to invest in Priyamali’s company.

The businessman sold some land and vehicles and made Rs. 750 million from the money he had invested.

The businessman was told that his money was used to buy shares in leading companies in Sri Lanka. However, the investigating officers told the court that the money was not invested in business shares.

The detectives said that Caram de Silva had also donated many valuable gifts to him.

Chief Inspector Niroshani Hewapathirana told the court that eight gold-plated brass rods were found in Bandara’s house. He also said that these were used to convince investors that Priyamali was extremely rich.

Chief Inspector of Police Niroshani Hewapathirana informed the court that 15 million rupees was found with Bandara’s mother. His mother told the police that it was Bandara’s money.

The court allowed the CID’s request to freeze the accounts of seven million rupees deposited in two Bandara private banks.

The investigating officers told the court that Priyamali had secretly brought a mobile phone to the prison and that she had made 11 phone calls.

She has asked six people who made phone calls to give statements. However, it was also stated in the court that none of them have come to the Criminal Investigation Department.

The lawyers appearing for Priyamali requested the court to issue an order to the media preventing the mainstream media and social media websites from spreading false information about their client.

Magistrate Gamage said that the court cannot give instructions on what the media can and cannot publish.

New developments in Priyamali’s case! ! Yet another mastermind! Krishantha! Who is he? (AUDIO)