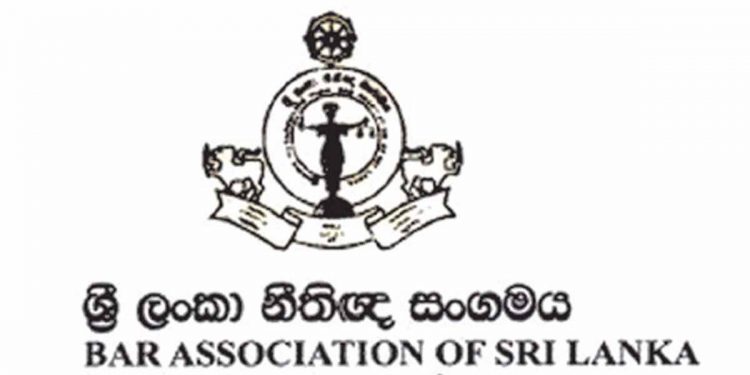 The Sri Lankan Bar Association has released a statement addressed to the President. In the statement, BASL urges the President and law enforcement officials to stop using the PTA and to immediately revoke the Detention Orders.

Bar Association of Sri Lanka (BASL) expresses grave concern about the use of provisions of the Prevention of Terrorism Act (PTA) to arrest and detain people involved in anti-government protests.

The BASL further notes that the use of the PTA has been viewed as a source of concern by the European Union in granting Sri Lanka an extension of GSP+.

The PTA’s abuse has also been raised numerous times at the United Nations Human Rights Council in Geneva.

In these circumstances, and in the absence of a clear definition of terrorism in the PTA, there is a grave risk that it will be abused to stifle legitimate expressions of dissent and to target people who exercise their democratic rights, such as the freedoms of expression and assembly, peaceful assembly, and association.

The Bar Association of Sri Lanka (BASL) is deeply concerned about the use of the provisions of the Prevention of Terrorism Act (PTA) to arrest and detain persons who have been involved in protests against the Government.

In a Media Release dated 19th, August 2022 the Sri Lanka Police has stated that certain suspects are being presently detained in relation to incidents that occurred during the protests from 9
th April 2022. It is noted that since then Detention Orders for 90 days, have been issued, signed by the President in his capacity as the Minister of Defence detaining three protestors under Section 9 of the PTA.

The PTA is a draconian piece of legislation, which gives wide powers to the Executive to arrest and detain persons for a lengthy period of time. Although Detention Orders are amenable to the Fundamental Rights and Writ Jurisdictions of the apex courts, they are not subject to regular judicial supervision unlike instances of arrests and detention under the general law. Administrative detention confers the Executive with wide powers over the freedom of physical liberty of a person and lengthy detention periods without judicial supervision go against internationally accepted standards of protection of human rights. There is also the danger that such detention may result in the detainee being subject to torture and inhuman treatment.

The provisions of the PTA have time and again been abused as evidenced by many judgments of the apex courts in Fundamental Rights and Writ Applications and as observed by several Members of Parliament on the 22nd March 2022 during the second reading debate on the Bill seeking to amend the Prevention of Terrorism Act, as reflected in the Hansard of that date. During the said debate the present President Hon. Ranil Wickremesinghe who was a Member of Parliament has inter alia stated referring to the PTA that “in time to come, it was abused.”

The provisions of the PTA must be resorted to only in very exceptional circumstances where there is manifest evidence indicative of a terrorist dimension that would make resort to its use justifiable. The PTA was intended to address situations of terrorism and never to address offenses which may have occurred during the expression of dissent against the Government such as protests for which there exists the ordinary law of the land including the Penal Code.

In fact, in its response dated 15th December 2021 to the then Foreign Minister, Prof. G. L. Pieris MP, on a document prepared by the Foreign Ministry ‘setting out the main changes proposed in the provisions of the Prevention of Terrorism Act’ the BASL advocated amending section 2(1) of the PTA to prevent the misuse of the PTA to arrest and detain persons who are not connected to terrorist acts.

The BASL notes that the PTA is now being used despite assurances by the Government of Sri Lanka (GOSL) that it was implementing a moratorium on the use of the PTA. During the aforesaid debate in Parliament as reflected in the Hansard on the 22nd March 2022, the then Minister of Justice Hon. M.U.M. Ali Sabry MP, presently the Minister of Foreign Affairs stated in Parliament as follows:

“As a result, since September 2021, there has been a de facto moratorium on the use of the PTA on offenses other than those which have direct involvement with terrorism. Therefore, these are progressive steps made in that regard.”

The BASL also notes that the use of the PTA has been seen as a matter of concern in granting to Sri Lanka an extension of the GSP+ by the European Union. The abuse of the PTA has also been raised time and again at the United Nations Human Rights Council in Geneva.

In these circumstances and in the absence of a clear definition of terrorism in the PTA, there is a grave danger of it being abused to stifle legitimate expressions of dissent and to target persons who exercise their democratic rights including the freedoms of speech and expression, peaceful assembly, and association.

The BASL therefore calls upon the President and the law enforcement authorities to refrain from using the PTA in this manner and to immediately rescind the Detention Orders issued referred to above.