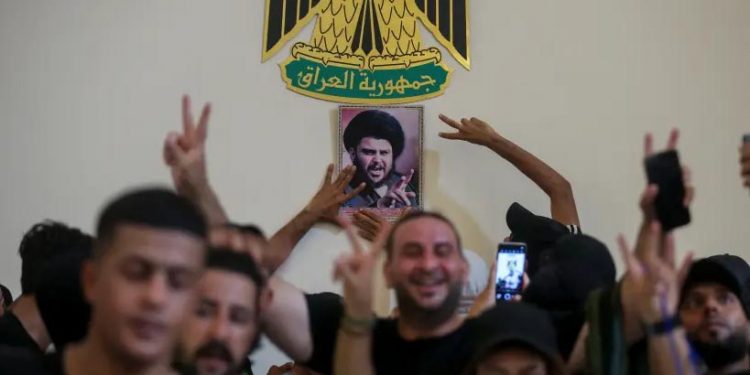 The latest demonstrations come after Sadr announced his “final retirement” from politics and the closure of all organizations affiliated with him. Iraq has been swept by political turmoil in the past year, as Sadr and his rivals have both attempted to form a government without success.

This isn’t the first time the Iraqi cleric has announced his retirement. In 2013 and 2014 he made similar announcements, but eventually returned to politics.

Video from the Green Zone in Baghdad showed protestors entering the presidential palace, with many swimming in the pool at the palace.

Gunfire in the Green Zone later on Monday afternoon, with initial reports indicating that the Iran-backed Popular Mobilization Forces (PMF) are using live ammunition against Sadrist demonstrators. Videos from the scene showing protestors running amidst heavy gunfire noise in the background.

The Iraqi Joint Operations Command called on the demonstrators who had breached the presidential palace to withdraw. “adhered to the highest levels of self-restraint. Prevent clashes. Not to spill Iraqi blood.

Iraqi Prime Minister Mustafa Al-Kadhimi ordered the suspension of the sessions of the Council of Ministers due to  the unrest the unrest on Monday.

“The dangerous developments that occurred in our dear Iraq today.  Demonstrators are storming the Green Zone to enter government institutions. They demonstrated the seriousness of the consequences of the continuation and accumulation of political differences,” Kadhimi warned.

The prime minister called on Sadr to have the demonstrators withdraw from the Green Zone.

Sadr advisor calls for followers to listen to Iran’s Khamenei

Muqtada al-Sadr, an advisor to Iraqi Prime Minister Haider al-Abadi, announced his resignation on Monday. This is due to illness and old age. On Monday, Kadhim al-Haeri, a high-ranking Iraqi Shi’ite cleric based in Qom, announced his retirement from the clergy.

on Monday,he announced that they must all obey Iranian Supreme Leader Ali Khamenei. He called for the people of Iraq to maintain unity and harmony.

The cleric also warned Iraqis against Baathists, Israel, and the US.

A student in year 9, sat for A/L in Commerce and obtained 3 B’s!

SLPP commence party work with Basil, and Namal; Rohitha-Mahindananda is also down to work! (PHOTOS)