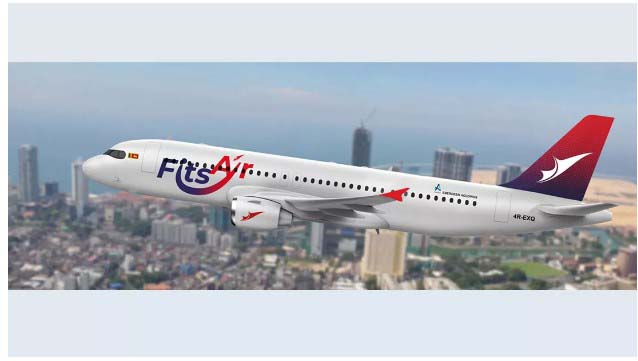 “The country needs a second force, we need to show that an airline can be run well when privatized,” Hill told reporters in Colombo.

The airline is entering the market at a time when domestic spending has been destroyed with the rupee collapsing from 200 to 360 to the US dollar after the central bank printed money for two years and floated the currency with a surrender requirement and the economy is facing forex shortages.

Sri Lanka has faced shortages of aviation fuel due to forex shortages and a state monopoly in aviation fuels. Imports were later liberalized. Hill said the airline had a stock of fuel in Colombo which would keep it going till December.

The airline was not competing with full-service carriers but is ‘aiming at a different market’ he said.

Fits Air will offer passengers 30 kilograms of checked baggage and 7 kilos of carry-on luggage. Passengers who take less than 20 kilograms will pay less for the ticket.

Food will be extra but a ‘refresher pack’ will be given free despite being a no-frills carrier.

A start-up airline usually takes about two years to break even and profits in the third year, he said.

Hill, a former Emirates executive who was in the founding team and also ran SriLankan Airlines profitably said he was aiming to break even in the first year with some routes expected to be profitable early.

Emirates was profitable in a year, he said.

There is strong potential for regional flights to India from Jaffna and also flights from Ratmalana he said, which the airline was looking at.

Smaller ATR-type aircraft are needed to operate from the smaller airports.

Creditor cooperation a must for Sri Lanka IMF programme: Govt