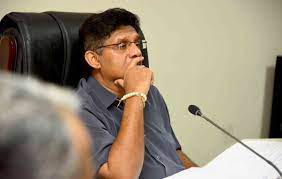 I want to build the Sri Lanka Podujana Peramuna like the Communist Party of China and the Bharatiya Janata Party of India…’
This is Basil Rajapaksa’s statement to ‘The Hindu’ newspaper on December 4, 2021.

This is how foreign media described the victory of Podujana Peramuna after the 2020 general election.

‘If we get 70 parties, the party with the second highest number of votes will not get even 35 lakhs…’
This is the prediction made by Basil Rajapaksa before the 2020 general election.

Podujana Peramuna or Pohottuwa will complete 06 years by November 2022. Unlike the Communist Party of China and the Bharatiya Janata Party, Basil’s party has lost the presidency, the prime ministership, and not only the position of opposition leader but also the speaker’. It was against Ranil Wickramasinghe’s leadership Pohottuwa was established. Against his policies. Such a party today has fallen in to bankrupt position had to hire Ranil as the leader .

Maithripala is the General Secretary of Sri Lankan Freedom Party which won 48 lakh votes by 2014. Ranil did not became the president and hand over presidency to Fonseka or Maithripala. He only gave candidacy. The responsibility of winning was on Fonseka and Maithripala. Maithri said that even after winning the presidential election with difficulty,

Oh, so Basil who vouch to make a party like the great wall of China but made Ranil the president allowed Ranil to appoint the prime minister and ministers as he wanted, and handed over the all powers including the executive powers that were adopted by two-thirds, through the 20th amendment gave him everything, and why is he keeping his mouth shut. as the saying goes ‘ leasing out the land and gasping up ..?’

After establishing the pohottuwa and winning the 2019 presidential election, everyone called Basil as ‘B.R. is JR’s avatar. He is the mastermind of Sri Lankan politics. Podujana Peramuna said that Basil has seven brains.

‘How did Basil become so bankrupt that he could not get a ministerial position for a member of his party even if he used the brains that he had?’

After the presidency and the government were handed over to Ranil, there are some pohottuwa member who think that they should break up the Samagi Jana Balawega and finish off Sajit and end the struggle. However no one will dare to cut the nose in spite of the face. Nevethiless what pohottuwa had done is that. 1970-1977 Mrs. Bandaranayake used Rukman to split U.N.P.

But she did not give the prime minister ship to him. JR used Anurava to split the SLFP. But did not make him prime ministers. Mahinda also used Karu to split the UNP. But he was given the Ministry of Public Administration. There is not even a single political party in the world so stupid to that sacrifice or give in charity the presidency, prime minister ship, and the government to other party

‘Will what happened to elephant, happen to pohottuwa in the next election …?’

Against the central bank robbery , against the giving oxygen to the Tiger Diaspora, putting Gnanasara Thero in jail, against petting Muslim extremists, against singing the national anthem in Tamil, against selling state resources, 69 lakhs turned the back to him and decided to defeat Ranil’s government and hired Ranil to the presidency. Will that 69 lakhs, fire pohottuwa in similar manner ?

Basil started to think like Ranil, and he himself had destroyed the pohottua. This means that they think that no one but Rajapaksa can win the presidency and prime minister ship. Basila did not even propose a member of parliament from Pohottuwa for the prime minister ship, fearing that if a member of Pohottuwa becomes prime minister, Pohottuwa will rally around him. This was Ranil’s pain. Now that bug has infected Basil. The bud ends with that sickness.

Until 1994, the biggest party in Sri Lanka was UNP. After 1994, the UNP became smaller and smaller. SLFP was a huge party. It was Ranil who destroyed the SLFP in 2014. Maithripala was hired as a presidential candidate and went to form a national government with the SLFP. The Podujana Peramuna was born as a result of this. Ranil went to hire Maithri and almost lost the U.N.P.

Why can’t Ranil be the president now and save the U.N.P…?’

Today, Ranil has joined forces with the Rajapaksa’s, the enemy of the U.N.P. I can’t imagine Ranil will get the votes given by the U.N.P in 2020. With Ranil and Rajapaksa’s alliance, the Sri Lanka freedom Party had the ability to grab the votes against the Tiger Diaspora, against Muslim extremism and against the sale of state property in 2019 and 2020.

‘Even though he helped me become president, I destroyed Ranil because he was a reactionary. The Rajapaksa made Ranil the president…’
Maithripala could have said this to the Pohottu voting base. But Maithri has started crying his alliance for Ranil louder than Rajapaksas .

That means the SLFP is over. The Rajapaksas and Ranil have already broken the party. The party is dead.

If the pohottuwa, the elephant and the hand are gone, what is left…?’

Their ultimate goal in politics for many of them is a powerful minister ship. Today, Ranil is playing games 24 hours a day to drag them by offering minister positions. The Rajapaksas will help this. From the day Ranil became president until today, the biggest news for the media and websites are SJB breakaways to the government. According to them, there is no economic crisis in the country today. The price of goods is not a problem. The only question is how to break the united people force.

This Rajapakse media mafia, Ranil’s bait, in the midst of the ghosts of the Rajapaksas, Sajith is somehow protecting the party without allowing it to break. If Sajith had before Ranil and took the post of Prime Minister, Sajith would not have become the President. Then Gota get cleared and highlighted. In that case Gota is still the president today. struggle would have wound up then itself.

Gota would have cleared IMF and international community and chased Sajith. Sajith was not looking to become the Prime Minister for a few months with the help of the Rajapaksas, but to become the President in 2024 with a public mandate. Even those who take over as ministers in Ranil’s government today will have to retire from politics in 2024 with the help of the Rajapaksas.

That is what the MPs of Samagi Jana Balavega have to decide today.

‘Ranil’s government will suffer the sins of Rajapaksa…?’

Today there are two leaders. One is Sajith, the leader of Samagi Jana Balavega. The second one is Anura Kumara, the leader of Janatha Vimukthi Peramuna. These two will share the government and the opposition in 2024.

The US government’s law suit against Gota. ( Inside Politics by Special Correspondent)