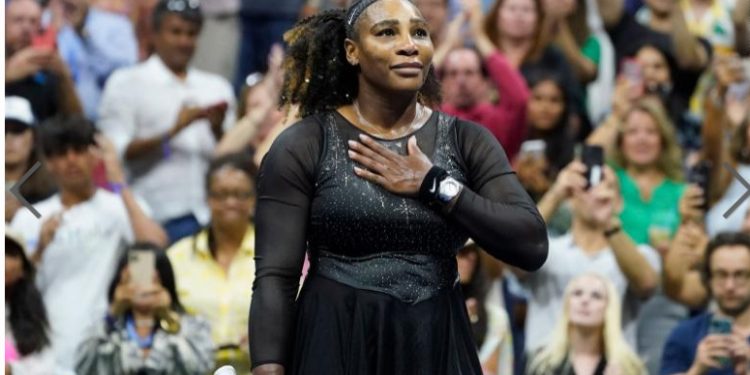 Serena Williams’ legendary tennis career has likely come to an end after she fell to Australia’s Ajla Tomljanović in the third round of the US Open at Arthur Ashe Stadium in Flushing, New York.

The 23-time grand slam singles champion leaves an indelible mark, not only on tennis, but all of sport.
Tomljanović, who won the more-than-three-hour match 7-5 6-7(4) 6-1, advances to the round of 16 at the US Open for the first time.
In an on-court interview with ESPN after the match, Williams was asked whether she would reconsider her evolution away from tennis, as she has put it.
“I don’t think so, but you never know,” she said.
In a happy, tears-filled interview she thanked her parents, saying she was very grateful to them because they started everything.
And she credited her older sister, Venus Williams, for her success.
“I wouldn’t be Serena if there wasn’t Venus,” she said. “She’s the only reason Serena Williams ever existed.”
Tomljanović said she was feeling sorry because “I love Serena just as much as you guys do.”

“What she’s done for me, for the sport of tennis, is incredible,” she said in her interview on court. “I never thought that I’d have a chance to play her in her last match when I remember watching her as a kid in all those finals, so this is a surreal moment for me.”
Tomljanović was asked how she handled the occasion of being in this electric environment at Arthur Ashe Stadium.

“I just thought she would beat me, you know,” Tomljanović said. “The pressure wasn’t on me. She’s Serena. I didn’t think that I — even to the last point I knew that she’s in a really good position to win even when she’s down 5-1. I don’t know how many match points I needed to finish it off, but that’s just who she is. She’s the greatest of all time, period.”

After her improbable second-round win over Anett Kontaveit, Serena Williams, 40, summed up her surprise performances at the US Open better than perhaps anybody else could.
“I’m just Serena,” she said matter-of-factly, a quote that will no doubt go down as one of the most memorable in sport.
That ability to find another gear and dig even deeper in the most difficult moments has provided the bedrock for Williams’ sustained success over more than 20 years on the Tour.

She showed the same grit and tenacity Friday as the world No. 46 Tomljanović was on top of her game.
“I’ve been down before,” Williams told reporters after the match. “I’ve been down, like, 5-1 I think before and come back. I don’t really give up.”
Williams, arguably the greatest women’s tennis player ever, fought off five match points before a shot into the net ended it.
“I tried,” Williams said. “Ajla just played a little bit better.”

Surely, after two glittering decades at the top, this is where Williams’ career would come to end? Of course, it didn’t. She is, after all, “just Serena.”
In her three-set win over Kontaveit, Williams elevated her level of tennis to a place many thought she may no longer be able to reach. The accuracy and power in her widely feared serve seem to have returned, as has her speed around the court.

Tomljanović reached a career-high ranking of 38 this season and has enjoyed some notable success in 2022, including quarterfinal runs at Wimbledon and the recent Cincinnati Open.

On Friday she was steady as she had just 30 unforced errors to Williams’ 51.
She will face Russian Liudmila Samsonova in the round of 16. Samsonova defeated Aleksandra Krunic of Serbia 6-3, 6-3.