Sachini sacrificed her kidneys and eyes to honour her father. 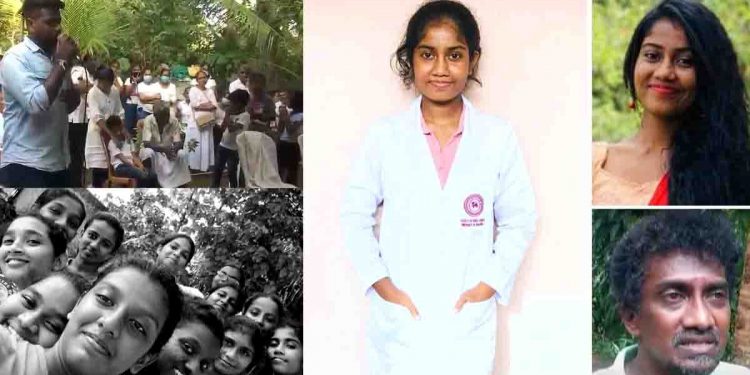 You brought happiness to our lives, daughter. You are my greatest achievement in the world. Since the birth of my daughter, my life has become brighter. Since then, the value of our lives has increased. If someone asks me what the happiest day was, I would say the day my daughter was born. When I came home after a long day at work and my daughter come running to the door and hugged me, I forgot everything that had happened that day. You were the comfort of my life. From the day you were born, you were raised with love and care for 23 years.

You grew up hanging to me when you were very little. Those memories are hard for me to forget. Since then, you were been taught the virtues of this society and groomed and natured well until you entered the medical faculty as an undergraduate. We were so happy when you got selection for the medical faculty. We were so happy that day. I dreamed of the day when you would dress up like a fairy for your marriage. But those dreams faded away. That happiness is not eternal. Since childhood, the house was filled with your smile. But as of today, the house is deserted like a graveyard.

‘You left us.” Your life is the price paid for a driver’s careless driving. Before you leave this world, my daughter, we thought of what good things we could do for you. You have been given good things since your childhood. I wanted to do the same even with your last breath…’

Sachini Lakshani Galappatti, who was a student of the 19th  batch of the first year of the Faculty of Medicine of the University of Peradeniya, is the daughter of this beloved father. Sachini’s hometown Tangalle Pallikkudawa Maligathanna village. She was educated at Galle Model Primary School and Tangalle Girls’ College. After finishing lectures at the university, Sachini came to the boarding place with two of her friends. They were walking to the Hilda Obeysekera hostel on Galaha road near the university. As they were walking, they had to face an unexpected tragedy as if it were a uncertain cruelty of fate.

A car lost control due to a careless driving put both Sachini and her friends in danger. After knocking them down the car ran to the other side of the road and hit a motorcycle and stopped. Sachini had suffered serious head injuries in this accident.

This is how Menaka Weerasuriya’s brother, who was nearby at the time of the accident, had recorded the incident on his face book.

‘This incident happened near the ‘Pera wala’ right in front of my eyes. As soon as he saw it, he ran towards the place of the incident. Her head had hit the embankment on the road. Tried to stop a on the road but no vehicle stopped. Later, a university driving training vehicle only dropped the people undergoing their training and she and her two friends and the driver of the bike were immediately hospitalized. What happened is unimaginable. Never imagined a thing of this sort would ever happen. As there was no visible injury…’

She was initially admitted to the Peradeniya Teaching Hospital. Sachini was transferred to the Kandy National Hospital due to her serious condition, and the doctors took steps to admit her to the neurosurgery intensive care unit of that hospital. Although she was receiving treatment there for about a week, her condition had not improved. Doctors explained her serious condition to her parents only after that. Doctors said that Sachini’s brain was already dead by then. Then this father thought the best he could do for his daughter. Sachini’s parents informed the doctors to make arrangements to donate Sachini’s organs for another dying person.

Sachini’s parents may have thought that such an untimely death may have happened due to some evil that happened to her in a previous life. According to their religion, they decided to donate her organs for the benefit of another person.

Unable to bear the sudden death of Sachini, her father expressed his grief like this.

‘This is my eldest daughter. Now she is 23 years old. The daughter studied in the first year of Peradeniya University Faculty of Dentistry. My daughter faced  this incident on her way to the hostel from the medical faculty. While walking on the pavement, a car had come and hit her. My daughter’s life was taken away. The driver had fallen asleep at that time. The university called us and said that the child had an accident and was admitted to Peradeniya Hospital. When we went to Peradeniya Hospital, she had been transferred to Kandy General Hospital.

For this, the doctors and nurses of the Kandy General Hospital Neurological Unit made great efforts. The doctors said that the daughter’s blood pressure is getting worse day by day. He said that the heart and liver could not be saved. But the doctors arranged to transplant the two kidneys and eyes. It gives me great comfort to be able to donate those organs. The daughter died exactly on the fifth day after celebrating her 23rd birthday. We can’t bear this….’

Sachini’s friends at Peradeniya University affectionately called her ‘Batithi’. Her last rites took place on the 11th  at Tangalle Maligathenna Public Cemetery. She departed forever amid the sighs of many people including Sacini’s university friends. Friends had displayed a banner expressing their grief on her untimely departure.

Every day for all of us

There is no difference

I don’t know where

Sachini’s friend Shadi, who studied in the same school, wrote this on her face book.

‘Sachini, I never dreamed that I would have to say this. Although you were unconscious when we came to see you, we believed that you would wake up soon. Then go and come. Shout and sing songs together, watch Merlin and read and share Arthur and fight, act together like this in Drama Competitions, come home together in Kuduwella bus for hours instead of getting on Matara buses through Mahawela for fear of being stop or not stop. shout and dance crazy in class, Unwrap one rice packet and eat it, make love to Shihan, Dasun, Dassa, Sunira Sumanga, and we will meet again my Sachini… I feel like saying that. Inspired by the good deeds you have done, may your beautiful soul rest in the Nirvana you are looking for.

Sachini loved to listen and sing. She was very fond of music. Her favorite singer was Derana Dream Star Sunira Sumangya. Sachini had made a wonderful request to Amma because of her love for Sunira Sumanga. Sachini had asked her parents to bring Sunirava and give her an opportunity to sing after completing her university studies. Sachini’s mother had expressed her consent to the request, and they had arranged to inform Sunira Sumanga of the same. At that time Sunira had told Sachini to achieve her educational goals and after that she would come to fulfill her request.

However, Sachini passed away before she could achieve her university dream. Her mother regretted not being able to fulfill Sachini’s request. A sister of Sachini had told Sunira about this sudden death. Sunira had come to her last moment to fulfill Sachini’s last request leaving all his affairs aside. We got to see how Sachini’s family thanked Sunira for coming to fulfill their daughter’s request in a society where there are some artists who make all decisions based on money. Sunira, who came to Sachini’s last moments, asked permission from the funeral organisers and sang this song, which Sachini loved very much, making everyone’s eyes dim with tears.

Today Sachini had to leave her life because of a careless driver. Tomorrow that accident may happen to you or someone close to you. Be careful on the road. People are very selfish. They only think about their work. Love, kindness and discipline have been lost from people today. There should be law, discipline and morality in a country. In such a lost country, innocent people are helpless. It was a result that was seen through this event.

Sachini, you dreamed of becoming a doctor. It is this society that did not allow that dream to come true. You gave a message to the country. When you die, you are asked to donate organs to someone who is struggling to live on this earth. That someone else should live for a day for the dead person. Many more will see the world of tomorrow from every part of you that has come to life. Bloom beautifully in a good place Sachini… we love you…

Thimbirigasya is joined by a massive throng as the cops take Liberty Roundabout! The struggle continues! (VIDEO)