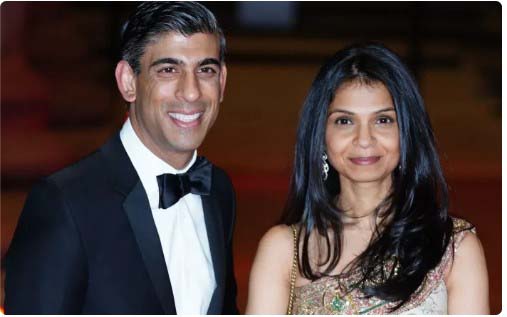 The usually private 76-year-old said: “We are proud. We are confident he will do his best for the people of the United Kingdom.”

Mr Sunak’s father-in-law has been hailed as a pioneer of the IT industry boom in India and has previously been dubbed the Bill Gates of the country.

Mr Murthy, who came from humble beginnings, rose to become one of India’s wealthiest men after he set up tech company Infosys in the early 80s.

His daughter, Akshata Murthy met Mr Sunak while the pair were studying at Stanford University in the US. The couple have two daughters.

Ms Murthy previously came under scrutiny after it emerged she held non-domiciled status, meaning she did not have to pay tax on her earnings outside the UK.
Ms Murthy owns a 0.9 per cent stake in Infosys, according to the company’s latest annual report, which is estimated to be worth about £700m.

Ms Murthy has also worked as a fashion designer and Infosys is just one of her business investments. She later agreed to pay tax on all her worldwide income.

In a letter to his daughter, published in 2013, Mr Murthy recalled how he was told the news of her birth in Hubli in April 1980 from a colleague because the family could not afford a telephone.

“Your mother and I were young then and struggling to find our feet in our careers,” he wrote.

When she was just a few months old, Ms Murthy was sent to live with her paternal grandparents as her mother, Sudha Murty, and her father pursued their careers in Mumbai.

Mrs. Murthy, an author and philanthropist, was awarded the Padma Shri, the fourth highest civilian award in India, for social work by the Government of India in 2006.