Ranil will accomplish what Chandrika failed in Kotte ? 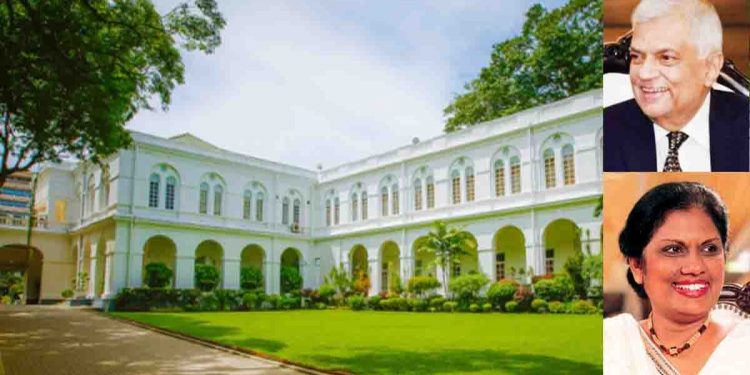 There is only one King’s house in Sri Lanka, no matter how many houses there are. The fort is home to the only royal residence. Although the perch is now worth crores, few people are aware that the kings’ palace of the fort was built on a graveyard. A royal graveyard is not just any other graveyard. The body of the Portuguese-crowned King Don Juan Dharmapala is said to have been buried in the cemetery owned by St. Francis Church before being removed and buried elsewhere. The Dutch were responsible for the original construction of the palace that we see today. Engel Beek, the last Dutch governor of Ceylon, was the first resident of this king’s house.

Following him, thirty British governors resided in this palace. The name of this royal house was changed to the President’s House after the Republic Constitution was adopted in 1972 and Sri Lanka was freed from the Dominion status of the British Crown. Since then, the mansion, which has housed a nominal president and seven full-fledged executive presidents, has captured the majority of the world’s attention after it was seized by militants a few months ago.

You may assume that the writer is referring to the king’s residence in order to discuss the bed sheets, pillows, and mattresses that were lost there during the previous conflict. However, the writer is attempting to inform you about current President Ranil Wickremesinghe’s efforts to construct a new Kings’ house, as well as related historical events.

It is widely known that the kings of Sri Lanka relocated their kingdoms. The main reason was that the enemy would occasionally attack. According to the Mahavamsa, the Ceylonese kingdoms that moved from place to place, such as Anuradhapura, Polonnaruwa, Yapahuwa, Dambadeniya, Kurunegala, Kotte, and so on, eventually came to a halt at Senkadagala Pura in Kandy. It was customary at the time to construct a separate royal palace in each of these kingdoms. Despite Sri Lanka shifting its administrative capital from Colombo to Kotte/ Sri Jayawardenepura, the Royal Palace or King’s House remained unchanged.

It was located in the fort. President JR relocated Sri Lanka’s capital from Colombo to Jayawardenepura. Jayawardena once attempted to bring Dalada to Jayawardene Pura. The attempt was thwarted due to strong opposition from Buddhists led by prelates. JR attempted to touch the tooth relic but never attempted to move the king’s house from fort to kotte.

Following JR, R. Premadasa, and D.B. Wijetunga Sri Lanka’s President was Chandrika Bandaranaike Kumaratunga. During her reign, the LTTE’s terror activities reached to a peak, and the LTTE assassinated list was soaring with names of the calibre of Ranjan Wijeratne, R. Premadasa, Lalith Athulathmudali, Gamini Dissanayake, and many other political leaders.  President Chandrika’s security was in jeopardy.

As a result, the Presidential Security Division has closed the roads that the President uses to the general public whenever she steps out. This action infuriated the public and harmed Chandrika’s already dwindling popularity. Daily newspapers carried articles about it. The alternative media began to criticise it. Harry Gunathilaka, a former air force commander who once wrote an article to the Sunday magazine ‘Lakbima,’ presented the President with a proposal to settle in the Maldives.

In this context, it is proposed to relocate the President’s or King’s House to Sri Jayawardenepura Kotte, the fort where the then-President lived. It is proposed that not only the presidential palace but also a presidential complex be constructed there. As a result, it is proposed to build a complete office complex in Kotte Jayawardenepura, including the President’s Secretariat and Security Camps. The mansion, which was envisioned as a VIP complex, included many luxurious features that are still surprising today.

Buildings covering nearly 100 acres were to be constructed here. Furthermore, hundreds of local residents were forced to leave their homes and property while the President was being accommodated. As a result of this situation, public opposition to the proposed new presidential VIP complex has grown steadily.

The ‘Sunday Leader’ newspaper, edited by Lasantha Wickramatunga at the time, began publishing articles strongly opposing Chandrika’s plans to build a “palace” in Sri Jayawardenepura Kotte. These articles emphasised that the proposed construction would cause significant environmental changes in the area, that traditional residents would lose their properties, and that the compensation they would be entitled to would be far less than the market value.

Due to simultaneous public protests, Chandrika’s government was forced to back down. As a result, it was proposed to abandon the initially chosen area and build the President’s VIP complex elsewhere.

The Urban Development Authority, which was in charge of the entire project, had picked the Sri Lanka Land Reclamation and Development Corporation to fill and prepare the marshy land for new building (SLLRDC). In addition, it was suggested to reclaim a portion of Diwawanna  Oya and to extend the Oya towards the Japanese Friendship Road. It was projected that alone; over 250 million rupees will be spent. It was proposed that construction will commence in the middle of 2001.

It was necessary to remove twelve acres of land in order to construct the Presidential Palace, Secretariat, and Security Complex. There were marshes surrounding Diyavanna Oya and its overflow region. Diyawanna Oya was to be extended toward Japan Friendship Road in order to compensate for the water storage capacity lost due to land filling.

In addition, it was stated that a portion of the road will be filled in, creating an island. In addition, areas along Akuregoda Road and D.P. Wijesinghe Road were to undergo significant alterations. With the construction of the Parliament, these regions saw significant transformation. Then, while the locals struggled to adapt to the new changes, the President’s House fell from the sky, causing them to find themselves in jeopardy once again.

Numerous parties were intrigued by the rapid acquisition of an environmental licence for a project that would result in such a significant environmental change. Numerous contradictory arguments were also expressed over the anticipated building costs. Even though the government indicated that a square foot costs 46,000 rupees, the actual price does not surpass 60,000 rupees, as mentioned in parliament. However, the Chandrika administration continued to grow. However, due to persistent public opposition and charges against it, the construction of the presidential complex in Kotte never occurred.

Ranil has come forward to acquire Chandrika’s abandoned mansion. In an effort to transform the fort into a tourist attraction. Consequently, a structure belonging to the Ministry of Foreign Affairs and the Police Department will also be demolished. Former President Gotabhaya Rajapaksa cannot be disregarded when discussing the fort and the adjacent buildings.

Due to the fact that he was also fascinated in the fort and its surrounding structures during his reign of just over two years, the organisation ‘Selandiva’ was founded, and plans were made to sell the fort and surrounding buildings to private investors. It is merely questionable whether it is suggested to relocate the royal house of the kingdom, which is facing great difficulties, to Kotte in order to market it as “Selandiva 02.”

Candidates can spend 15 rupees per voter during the election! Within 21 days of the election, submit an audited candidate and party expense letter! If overspent, the membership will be revoked! VIDEO