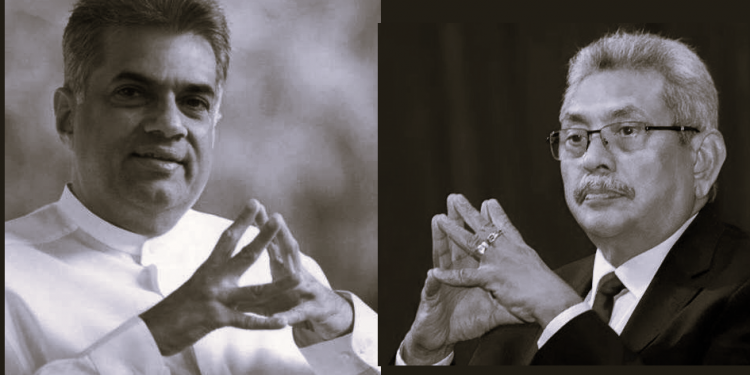 This is the promise we gave the people: with this we will substantially reduce the executive powers of the President and make the country more democratic. And today, the whole country waited with bated breath for this wonderful piece of legislation that you had promised the country to be brought to Parliament and debated and passed.

The government again gone on reverse gear. Gear reverse is now the catch phrase “GR”! We had a GR earlier who also did this. And then the new President when he declared High Security Zone, under the Official Secrets Act, and it was pointed out it was ultra vires; that there was no power to declare High Security Zones under officials secrets act, he reversed.

He has earned for himself the name GR- gear reverse. We saw that again today. You step forward, say that you are delivering on your promise and then you turn your back. That’s the performance of this government.

The President was here in the morning and he made a special statement with regard to the economic crisis that the country is facing. I must place on record, our appreciation to the President for doing this as often as possible. That’s a welcome change from previous dispensations. From the time he took over as Prime Minister, he has laid out his plans; he has addressed the nation; he has addressed the Parliament.  Even after becoming President, he has done that and for that, I think it’s only fair that we place our appreciation.

This economic crisis itself is something that one needs to understand before we decide how it is being dealt with. As the President spoke, I clarified two issues, one was with regard to corruption susceptibilities that the IMF has highlighted. With the IMF’s highlighting corruption susceptibilities as a key challenge, a key factor for the country to come out of this crisis, it goes without saying that, that was a factor that contributed in no small measure for the economic crisis to happen – that the corruption within the government was definitely an important factor that caused the economic crisis.

The unfortunate thing is that the whole country knew about it. It had even become a matter of light-hearted conversations; various minsters were referred to as Mr. 10%, etc., but by the time we started calling them Mr. 10%, they were actually taking 100%. Now you can’t do that for too long.

“You brought something called the 22nd amendment, and we pointed out that it in no way reduces any of the powers of the President. You tried to dupe the country; you tried to mislead the country into believing that you are bringing some democratic reform.”

Beginning of this year we raised these issues and said go to the IMF, start an IMF programme. Government said “No, No, there’s no such crisis, we can meet all our obligations.” By the middle of April the government declared the country as bankrupt, so today officially we are bankrupt.

While we must take steps to get out of that because the people are suffering and are due to suffer more, the increase in prices have not stabilised, prices keep increasing and that’ll keep happening. So while we address ourselves as to how we can come out of this crisis, it’s equally important that we also address the reasons for this crisis, and address those immediately. Otherwise it’ll be a vicious cycle and we will never be able to get out of it.

That’s the reason why I highlight the corruption susceptibility and there doesn’t seem to be anything that is being done. Unfortunately I must place on record, the answer given by the President himself, is unsatisfactory to say that we are bringing some law, and to tell the country that’ll deal with the rampant corruption is not satisfactory.

You brought something called the 22nd amendment, and we pointed out that it in no way reduces any of the powers of the President. You tried to dupe the country; you tried to mislead the country into believing that you are bringing some democratic reform.

When you realised that it was going to be exposed, that the opposition was not going to play ball with you, that the opposition had indicated to you yesterday, that there is no substantial change, that even after the passages of the 22nd amendment the President is going to continue to have the full complement of the 20th amendment powers, you have retreated, you have gone on reverse gear, and that’s a fact!

There is no change whatever in the powers of the President, even when the 22nd amendment is brought. So you can’t mislead the people; you can’t practice this fraud on the people. And that is what the opposition said: No, we will not go along with this. We will tell the people what this piece of amendment that you are bringing, what it’ll do, what it’ll not do.

Whilst all of this is going on I must raise some concerns, there are other things that are happening, and particularly in the North and East. Yesterday, the Police did what they have been doing here against the University students; they did that in Mullaithivu district.

Fishermen have been demonstrating peacefully for several days against illegal fishing methods. The Minister of Fisheries went there, promising to stop all illegal methods and I was told after doing that, some of his supporters took him to a side and told him something else, he came back and said ”I’ll make all these illegal fishing methods legal very soon.”

Now those illegal fishing methods are illegal world over, those are international standards, but what he had told them is “I will make it legal so let them continue” and so yesterday there was a clash and what does the Police do ?

They do what they are used to, they attack peaceful protestors; there was tear gas used, there was severe attack on this protestors. Now this is the kind of repression that the government is employing against people who are justifiably bringing their concerns to the fore, to asking questions – they have a right to ask those questions. In that area you are trying to change the divisions.

I am going to table a document marked “Confidential – for official purposes only”, but I have a copy with me and I am placing it responsibly here, by the ministry of Irrigation dated 26th September 2022, signed by Roshan Ranasinghe – Minister of Irrigation, in which you are tampering with the divisions. How the villages in the South of Mullaitivu district are going to be dealt with, how you are changing the administration in such a way that you are meddling with the ethnic composition and seeking to change the ethnic composition.

You have been trying to do this for several decades, you actually changed substantially the population of the East, now you are concentrating on the North of the Eastern Province, the North of Trincomalee district, and the South –East of the Northern District, the South of Mullativu district, and you are trying to bifurcate that natural linguistic contiguity by which the North and East are connected, it’s one region, there’s a natural contiguity. But by these efforts – gerrymandering, changing administrative boundaries – you are trying to break that contiguity.

This has very serious repercussions and I am asking that the government immediately halt these efforts using special laws such as Mahaweli, special laws such as forest ordinance, special laws such as archaeology – very important, wildlife, those are special laws for special purposes, that is true. But if using it not for the purposes for which those laws have been enacted as special laws, but you are using it for wrongful purposes. To supress an ancient community merely because we are smaller in number, to deprive us of the areas of our historic habitation, and that area in the joined North and East, and if you don’t stop it’ll be a further disaster for this country.

Excerpt from Speech by Hon. M.A.Sumanthiran M.P. on the adjournment debate on 06.10.2022 in Parliament.

Mahanayaka Theore’s to international community all call for an election Sajith says in Paduwasnuwara! (PHOTOS AND VIDEO)