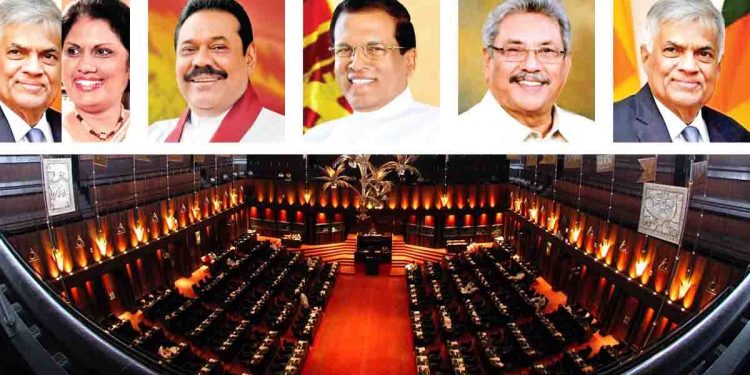 A new topic has come to the fore for us to talk about in Sri Lanka, where there is a dearth of essential items such as food, drinks, and medicines, the cost of living has skyrocketed, and almost all democratic rights are being curtailed. That is the Constitution and the amendments brought to it. The current government constitution of Sri Lanka, which has been constantly discussed throughout the history of the past four and a half decades and sometimes promised to be scrapped, was introduced to Sri Lanka in 1977 by J.R. By Jayewardene Government

In 1977, the United National Party (UNP) gained 6/5 parliamentary power due to the growing frustration of the people due to the inefficiency of Mrs. Sirimavo Bandaranaike’s government, which ruled the country from 1970-77. That mandate should have been completed in 1983. But through the referendum held in 1982, JR’s government proceeded to illegally extend that mandate for another six years. They spent the first decade of their rule bending the constitution to perpetuate their power.

Due to the overwhelming power of the ruling party in the parliament at that time, it was a common tradition for the government to vote in favor of the constitutional amendments and the opposition party to vote against it. However, since the 17th amendment of the Constitution in 2001, the amendments that were brought about use of the votes of the members of parliament are not based on the good or bad of the amendment, but for the well-being of the ministries they hold.

For some time, there has been discussion about the amendments to be brought to the Constitution in order to consolidate democracy in Sri Lanka. In order to prevent matters such as the infamous North West Provincial Council election held during the time of President Chandrika Bandaranaike misused of state resources by the ruling parties, Sri Lanka also needed a fully empowered Election Commission. The need to establish an institution with the same power as the Election Commission in India was considered and many needs such as liberating the public service from politicization and making the police department independent were emphasized.

The 17th amendment made it possible to appoint a legislative assembly for the purpose of appointing the members of the commission, taking away the power that the president had.

Indeed, the 17th constitutional amendment, which includes these proposals that confirm parliamentary democracy, was passed in Parliament on October 3, 2001, and all members of the ruling party and the opposition voted unanimously for it. It was the first such a voting pattern was seen in Parliament. 17 A Legislative Assembly chaired by the Speaker was appointed to appoint representatives to the proposed commissions. The Constituent Assembly consisted of the Prime Minister and the Leader of the Opposition and members appointed by the President after being nominated by them.

However, the 18th constitutional amendment came to the fore with a number of proposals that were always against the democratic beginnings given by the 17th constitutional amendment. That amendment was implemented solely for the political power project of former President Mahinda Rajapaksa. The amendment thereby removed the barrier imposed by limiting the maximum number of terms that one person could run for the presidency which was two. It was an amendment brought solely for Mahinda Rajapaksa and at that time he was serving his second term.

The Constitutional Council was also gotten rid of by this Amendment, and the Independent Commission was gotten rid of by the 18th Amendment. This amendment removed some obstacles to the President’s various appointments. The 18th Amendment, which reversed the country’s democracy, was passed by the Parliament of Sri Lanka on September 8, 2010. 161 Members of Parliament voted in favor of the bill, and 17 voted against it. There is no need to be surprised about the results, given the parliamentary majority that the then existing government had. But out of the 161 people who voted in favor of it, a majority of them had also voted in favor of the 17th amendment brought before that.

Nimal Siripala de Silva, Dallas Alahapperuma, Duminda Dissanayake, Douglas Devananda, Anura Priyadarshana Yapa, Mahinda Yapa Abeywardena, Mahindananda Aluthgamage, S.B. Dissanayake, Bandula Gunawardena, Johnston Fernando, Dinesh Gunawardena, Pavithradevi Vanniarachchi, Gamini Lokage, Maithripala Sirisena and nearly 28 MPs voted in favor of both the 17th Amendment and to the 18th Amendment which was completely reversal of 17A. There is no need for more examples of the fact that politicians who talk about policy politics by seconding referendum platforms are working without any policy in real life.

Mahinda Rajapaksa, who brought the 18th amendment to become the president of Sri Lanka until his death, was defeated by the former secretary of his own party in the presidential election held on January 08, 2015. The good governance government that was established after that amended to the constitution for the 19th time claiming to fix all the errors.

The 19th amendment in Sri Lanka’s political annals reactivated the independent commissions that had been deactivated by the 18th amendment and limited the maximum number of times a person could run for the presidency to two. 19 also included a clause prohibiting dual citizens from contesting elections in Sri Lanka and entering Parliament. It also included a clause limiting the powers of the President to dissolve the Parliament at his discretion until four and a half years from the date of election. In addition, this amendment confirmed that information is a right of the people. From that point of view, the 19th amendment was a progressive amendment that completely limited the powers of the presidency.
It is the opposite of the 18th amendment, or it is not wrong to call it turned up side down the 18th amendment.

Maithripala Sirisena, who voted in favor of the 18th Amendment, played a pioneering role in bringing the 19th Amendment and he was holding the office of the 6th Executive President at that time. Mahinda Rajapaksa, who brought 18, represented the opposition in Parliament as a Kurunegala district member when 19 was brought, but he was not in the parliamentary lobby when the 19th amendment was voted on.

The 20th Constitutional Amendment was the next amendment to the Constitution of Sri Lanka. By doing so, almost all the democratic elements created by the 19th amendment were abolished and the executive presidency was strengthened even more than it was. The right of the community to know the information contained in the 19th amendment was removed by the 20th amendment, except for the limitation of the maximum number of times that one person can compete for the presidency to two, and the limitation of the life of the presidency and parliament to five years.

Accordingly, the President was directly empowered to abolish the Constitutional Council and appoint representatives for independent commissions. In addition, the President was empowered to appoint high-ranking government officials such as Inspector General of Police, Auditor General, Attorney General, and Ombudsman. It also included the appointment of the three members of the Election Commission. The clause that prevented the President from dissolving Parliament for four and a half years was also removed and instead a new clause was inserted reducing that period to two and a half years.

Also, the new constitution removed the need to seek advice from the Prime Minister when appointing the Council of Ministers. In addition, the ban on dual citizens running for the office of President and Member of Parliament was also removed from the 20th Amendment.

The 20th amendment was passed in the parliament on October 22, 2020, removing about 90% of the democratic aspectss of the 19th amendment brought during the good governance government. 156 votes were received in favor of it and 65 votes were received against it. The special event that could be seen here was Diana Gamage, Ishaq Rahman, A.A.S.M. Rahim, S.M. Taufiq, Faisal Qasim, A.A.M. Harris, Aravinda Kumar and Sri Lanka Muslim Congress MP Naseer Ahmed voted in favor of the draft.

There, the chief organizer of the opposition, Lakshman Kiriella, proposed to the assembly that Article 17, which provides space for dual citizens to compete in a presidential election or a general election, should be removed, and a poll was also held on the matter. The number of votes received in support of the clause that allows dual citizens to come to Parliament was 157, and the number of votes received against it was 64. Akila Ilangei Makkal Congress Party’s Musharraf Mutunabeen, who voted against the 20th Amendment bill in the second reading, voted in favor of the dual citizenship proposal.
Nimal Siripala de Silva, Bandula Gunawardena, Dinesh Gunawardena, Pavitradevi Vanniarachchi, S.B. Dissanayake, Susil Premajayant, Douglas Devananda, Jagath Pushpakumara, Roshan Ranasinghe, Wimal Weerawansa, Udaya Gammanpila, Vasudeva Nanayakkara, Mahindananda Aluthgamage, CB Ratnayake, Mahinda Amaraweera, Dallas Alahapperuma, Duminda Dissanayake, Kanaka Herath, Lohanwattavarun, Prasanna Ratnaweera and others.

There were a lot of people. MP Sarath Weerasekera, who fought a lone battle against the 19th Constitution, was voted against the 20th. The immigration of the dual citizen Basil Rajapaksa, who was accused of destroying the economy of Sri Lanka recently, is happed because of the space opened up by the 20th amendment.

By that amendment, the exclusive power of the President to appoint persons to high positions in the public service has been removed, and it has been reassigned to the Constituent Assembly. (As in the 19th Amendment) the enforcement of independent commissions, the deprivation of duel citizen citizens the opportunity to hold a parliamentary seat and the presidency has been done away by this amendment. Accordingly, it seems that this amendment was drafted from the model of the 19th amendment.

But the clause that the President cannot dissolve the Parliament for four and a half years, which was included in the 19th Amendment, has not been included in the new amendment. Instead, the clause in the 20th amendment states that the president cannot dissolve the parliament until two and a half years have passed. It is clear that this happened due to the strict conditions put forward by the Samagi Jana Balavega.

.Although it is completely against 20A, all the members who voted in favor of it, except Sarath Weerasekera, have voted in favor of 21 this time, which makes it clear that the Parliament of Sri Lanka is full of politicians who have no policy, twice in two years. 44 MPs were not present in the assembly to vote in favor of 21. Among that group, there are nearly 25 members of the ruling Podujana Peramuna. Mahinda Rajapakse, Sanath Nishantha, Rohitha Abeygunawardena, Johnston Fernando, Pavithradevi Vanniarachchi, Prasanna Ranaweera, Prasanna Ranatunga, Sagara Kariyawasam, Seetha Arambepola, Dhammika Perera, Gamini Lokage, Sanjeeva Edirimanna, Jayantha Katagoda, Pradeep Undugoda and others are among them.

As nearly 25 MPs voted in favor of four contradictory constitutional amendments, it is clear that the politics of Sri Lanka is completely run for personal gain and there is no room left for national interests.