People who do not know the virtues of ‘Buddha’ Where do they go in the world after death? 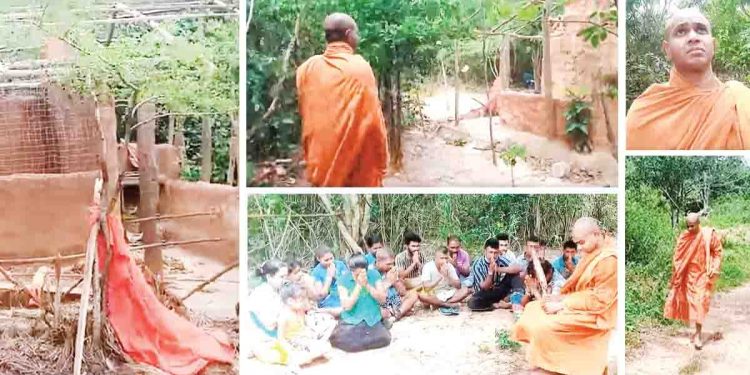 As Buddhists we came across a very sad news on social media recently. This incident was reported from Sigiriya Pidurangala Siyambalankoratua forest reserve. It is indeed a sad incident that merciless group of villagers broken down the meditating cabin of a Buddhist monk who has dedicated his life towards finding the path to ‘Nirvana’ while living alone in the forest.

The small hut where Reverend Adiagala Ananda Tissa lived had been demolished like in a most devastating manner. He had gone to a near by village for a sermon and returned to his hut, and found the hut in a complete destroyed state. This crime committed against the Reverend Thero, who was a very pious monk. He walks barefooted and devoted to fulfil his dhamma goal. This is indeed an act of sacrilege.

The hut where Rev. Anandatissa lived was built very modestly. It was later revealed that the cabin, which had been neatly arranged with wooden sticks and clay found in the forest. This tiny place had been destroyed by the criminals engaged in timber smuggling in the forest. A sever pain generates when anyone sees the destroyed cabin. How can a person with human heart and soul do something cruel like this?

He must have stood near the destroyed cabin and looked at it with a sense of concern. It was because of this cabin that he was safe in a forest full of wild elephants and tigers. But there is no room for him to live in at present. It was this mud house that sheltered Rev. Ananda Tissa for his sermons and meditation. He who lived in that cabin had never been harmed by a four-legged animal.

But what happened to him from heartless two legged people is beyond comprehension. This is an incident that can never be corrected during a entire time of human cycle.
On behalf of ‘Mawrata’ newspaper, we contacted Venerable Adiyagala Anandatissa Thero, who faced this sad incident, about it. He described it in this manner.

‘I had constructed a cabin in the forest. In Sigiriya, Pidurangala Siyambalankoratuwa, the village of Sigiriya, this was built in front of the lake. These lands are government lands belonging to the wildlife department. In this forest, animals like elephants, birds, and some rare animals like green leopards and dark leopards live. There are also snakes like cobras, Vipers. But they have never harmed me.

People remove the boundary stones of this forest and cut down the forest and sell land to hotels. The people of this village are divided into two groups. One group lives righteously by giving alms. Another set of people involved in forest smuggling and destroying the forest. I used to work on Saturdays, chanting and meditating on the Pinda Patha. During the Corona period, I don’t go to the houses much to do Pinda Patha.

Donors of the village brought alms on Saturday itself and offered me pooja. But these wood smugglers never came to listen to sermons. That group came and cut the forest while I am in my hut on Saturdays. I alerted the wildlife about this . They said they have filed court cases for them but don’t know. Because of these incidents, on several occasions about 10 people came and even threatened me with death

Those who helped me were also threatened with death. They beat me and tried to drive me away. At first I did not even go to the police and complain because of these people. Because they couldn’t drive me away, I was subjected to many insults after insults. Recently they broke into the house where I was living and broke the house when I was gone on visit. Even they broke into the house I was preaching ‘pirith’ .After that, the police officers came and took me away. That was around eleven o’clock at night.

It was after that incident that I lodged a complaint with the Sigiriya Police. An officer named Malalasekara led this investigation. When the complaint was examined, no one was allowed to the inquiry room only I was taken in. I stayed at a donor’s house because I had no place to stay. The next day, when I went to check on the police complaint, due to some influence of the other party, the police took the side of that party. They accused me of various things. Due to various incidents like this, I decided to leave this village without staying any longer.

This wood smuggling is happening in big scale in those areas. Clearing the forest. Inside the forest, fences are built and each section is cultivated separately. Cows were tied inside the forest and stables were built. Little by little, the forest is burning. There are several people who do these things. They are doing these things with the help of politicians.

I am now temporarily living in the temple called Alakolawewa. Rev. Kosgahalinda Viharananda of that temple allowed me to stay there temporarily. Many saw this incident on social media and said they would help me. But no one has come forward yet. The contributors who helped me to build the hut once again in the same area.

Legal action can be taken against those who cut these forests. There can be fights between the two groups in the village. I preached and meditated in many places in Sri Lanka. That’s why I came here. The present temple also receives alms on some days and does not receive alms on some days. If you build a booth again, you can work in Pinda Patha and meditate.

My relatives helped me in building the cabin. I chant Pirith at seven o’clock in the night. Some days the elephants come and listen to Pirith and go away. When I get up at 4 in the morning and chant pirith, those animals come. But never cause any trouble. This area is an area where there are many elephants. People are the ones who are worried. In the end, I have to say that without using money, do the pilgrimage to Pinda Patha and do meditation activities to allow them to live freely. We are not taking any of this away. I just want to go to Nirvana…’

A villager near Siambalankoratua reserve mentioned Rev. Anandathissa in this way.
‘I was depressed person. A cabin like this is a very helpful place for someone like me to be mentally strong. It was this Reverend who brought me to a state of mental recovery. Every today I offer alms to him and listen to his sermon. We are all waiting for this Reverend’s house to be rebuilt and for Him to live there…’

‘When I was engaged in religious activities at a funeral home, I saw a group of people in a panic stricken and in a very concerned manner. I inquired about it. I came to know that the chamber where Rev. Anandatissa was sitting had been broken and removed by a group of people. Now the Rev. have no place to stay.

When I visited the place and looked Rev.’s ‘plight, I felt sad and sympathetic for this Reverend. Therefore, I invited the Rev. to our temple. This Rev. was living with elephants and tigers in this big forest. He preached and meditated and lived alone in this place. It is because of the wishes of politicians, the Rev. faced this plight. A crime has been committed with the aim of driving the Rev. away from here. We have all the reasons to believe that this has been done according to the wishes of the higher officials. It is understood that they are not performing their duties properly.

All these troubles were caused by the guards of our so-called Buddhist temples. In this village there is a group of poor people who work for daily wages and give alms. They do not have the means to go to a distant places and offer alms. It is a great blessing for people to offer a meal to someone like this. So, for such a thing, we hope to get support from the higher officials and the rulers of the government. I request everyone to allow this Reverend to preach and meditate freely….’

We have heard that even during the Buddha’s time there were sinners like this. At that time, Devdutta also rolled big stones to the Buddha who was engaged in walking meditation. If someone does something good with a good heart, it is certain that they will get a good reward. It is certain that if you have committed a sin, you will be punished in the same way. That is how we have heard about Buddha’s sermon. Even in the Sinhala song literature, songs have been written about this. This hymn written by Pujya Rambukan Siddhartha Thero which read like this

People should love the animal, the tree and the leaf to the nature. The environment should be protected . When those things are destroyed, there will be no country left for our future generations. Pure things could be done to this earth by our hands. Dirty or bad things too could be done. But profit and loss are temporary. We have to ask the people involved in these disastrous events to correct their mistakes and face life. Only the best we have done leads to a good end of life. Generosity and humanity exist only in real people.

If you too can make some contribution to this Reverend to escape from flies and mosquitoes and sun showers and realize the noble path of Nirvana through almsgiving, he can be contacted on.