Our system restores the country, not destroys it! Mahinda undertakes in Puttalam! 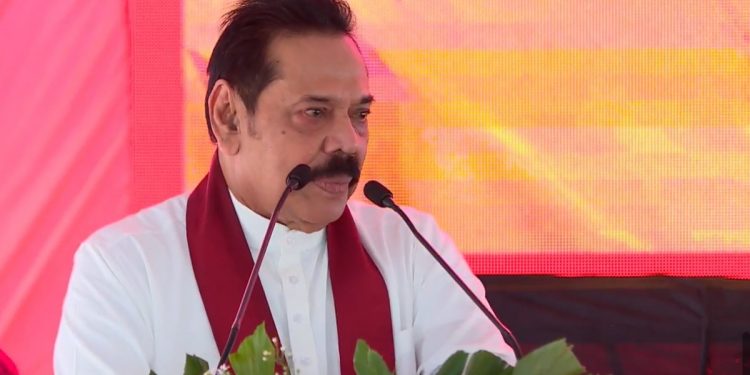 Our system is to recover the country from where it has fallen, not to bring it down! Mahinda gets on stage at Puttalam too!
Former President Mahinda Rajapaksa says that our country is facing many problems, but they can’t be solved by locking people up and asking them questions.

Pointing out the need to truly solve the problems facing the country, he points out that just by asking the people and questioning them, they will never be solved or answered.

Mr. Rajapaksa who mentions that some people say the answers and repeat the same questions, says that others say the questions in a different way.

Mr. Mahinda Rajapakse stated this while participating in a public meeting held yesterday (27) morning in Halawata, Arachchikattuwa town. The Sri Lanka Podujana Peramuna’s Puttalam District Constituency Conference was held here with the theme of “People Power Against Gang Power” and was organized by the Minister of State for Water Supply Mr. Sanath Nishantha.

We started our journey from Kaluthar and then went to Nawalapitiya and today we have reached Arachchikattu. We received many responses from the people in all these places. I also take this opportunity to appreciate your commitment to our future program. You know, even though some people have slandered us, we have never deliberately taken wrong decisions for this country. Will not take. So no one can call you guilty. Some insult us. They make those insults without even knowing the length and breadth of them. Do you have an understanding of the economic changes that have taken place after covid? We gave priority to save people’s lives by bringing immunization vaccines. But the next economic challenge has been a big challenge for all of us even today.

It is this people’s pressure that some have misused. Some are still inciting people today. But when asked to take responsibility for the country, they say no. That’s why the story is also told that the doctors are not worried even if the madman is worried. Our method is to pick up the country from where it fell, not to pull this country back again. Easy to set on fire, difficult to build. We should stand on the side of building, not on the side of burning the country. The people of this north-western province are well aware of terror. We don’t need to remind about them. I remember we used to stay in these provinces and vote. We have known the State Minister Sanath Nishantha since he was a local assembly member. Therefore, you may remember what kind of intervention was done during our government’s time to recover these areas from their existing condition.

I remember that when some roads were being repaired, in some places the journey was by boat. We put bridges everywhere as possible. The islands were removed. Infrastructure was developed. But there is also an unfinished work. We had to face this economic crisis while fulfilling them. Fishermen who are mostly in this province. And there are a large number of people engaged in agriculture. Fishermen due to fuel and people engaged in agriculture due to fertilizers faced many difficulties in the past. Not only in this province but everywhere in the country. Shrimp cultivation has also fallen into a difficult place today. They need help. If we help them, a large number of people can get economic benefits. So are other industries. It is not difficult to develop these businesses if you go on a systematic journey with a plan.

Even if not 100 percent, we are solving the problems you have one by one today. We accept that we need to solve these problems. However, these problems will never be solved just by passing the questions that block the people. There are no answers. Some say I saw the answer and repeat the same question. Others say it in a different way. But only the team that accepts the challenge of the country without fear of problems will have to face all the problems. We remind you that Sri Lanka Podujana Peramuna is the only suitable group even today. That is why we say that we are ready even for an election. There are some things that go wrong that we cannot prevent. They are wrong. There are things that we cannot prevent because of the respect that some things are done democratically. But remember that none of them are our defeats.

There are all Sinhala and Tamil Muslim brothers in this congregation. You can live in harmony in this area. If we continue with party colors, castes, religions, castes, and differences, we will not be able to find answers to even one of these questions. That is why we suggest to you today that we rise together. We confidently remind you that we will not only stand up together, but we will stand up with the program that will overcome the economic challenges that this country is facing. Therefore, let’s continue that journey together for the sake of the country. We invite you. Finally, we offer our thanks to all the organizers of Sri Lanka Podujana Peramuna and all of you, including our dear Minister of State, Sanath Nishantha, who organized this rally.