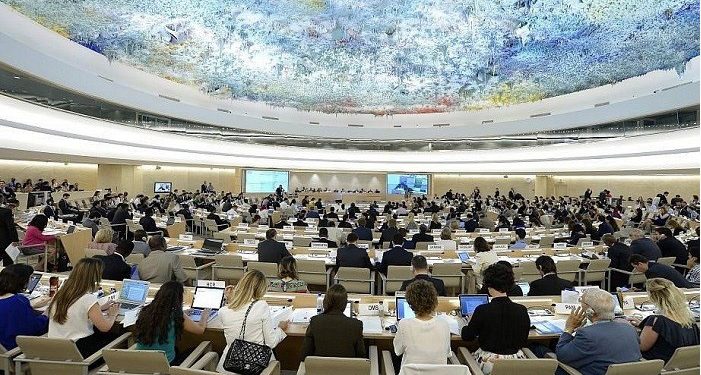 The Rights Groups said that Sri Lanka should be urged to end its use of the harsh Prevention of Terrorism Act as part of the resolution’s call to address ongoing abuses (PTA).

There is a severe economic, political, and human rights crisis in Sri Lanka at the moment. Gotabaya Rajapaksa resigned as president in the midst of widespread protests in July 2022, and since then, his successor, Ranil Wickremesinghe, has employed excessive security measures to silence dissent. Former UN High Commissioner for Human Rights Michelle Bachelet issued a comprehensive report on September 6 in which she stated, “Sri Lankans came together… in a mass protest movement to demand greater transparency, accountability for corruption and economic mismanagement and increased participation in democratic life.” She urged the government to protect the rights of protesters, put an end to impunity for past violations, and address the underlying causes of the current crisis.

Human Rights Watch’s South Asia director Meenakshi Ganguly said, “For many years, victims of past abuses in Sri Lanka have demanded justice, while successive governments have broken promises, blocked accountability, and promoted those implicated in war crimes to high office.” “The UN Human Rights Council ought to pass a resolution on Sri Lanka that urges the government to uphold accountability and the rule of law,” the author writes.

The United Nations has been tasked with monitoring the situation in Sri Lanka and reporting its findings at the 51st session of the Human Rights Council, which began on September 12. At this session, member states will review and update a resolution passed in March 2021 that established a UN accountability project to collect and prepare evidence of international crimes committed in Sri Lanka for use in future prosecutions. Amnesty International, FORUM ASIA, Human Rights Watch, and the International Commission of Jurists all agreed in a letter that it is crucial to renew and strengthen these mandates, including by providing more funding.

The UN High Commissioner for Human Rights wrote in her report that “deepening militarization and lack of transparency and accountability in governance… have embedded impunity for serious human rights violations and created an environment for corruption and the abuse of power.” Since accountability is lacking on the island nation’s end, she recommended that UN member states bring Sri Lankans accused of international crimes to trial abroad under the principle of universal jurisprudence. Noting that there are still unanswered questions over the role of the Sri Lankan security forces, the high commissioner also called for an international role in investigations into the 2019 Easter Sunday bombings that killed over 250 people.

According to Massimo Frigo, UN representative and senior legal adviser at the International Commission of Jurists, “the high commissioner has presented clear findings that require urgent international action to end impunity and provide for justice to Sri Lankans.” Human Rights Council involvement in Sri Lanka over the past decade has given victims hope while yielding only scattered, unfulfilled promises of reform; the council must continue to focus on this issue.

After President Wickremesinghe took office on July 21st, he immediately ordered the military to use force against protesters and arrested dozens of people on suspicion of taking part in the demonstrations. He has ordered the arrest and indefinite detention of three student leaders under the controversial Anti-Terrorism Act. The former minister of foreign affairs, G.L. In June, Foreign Minister Pieris assured the Human Rights Council that the government would not implement the law, and in March, Foreign Minister Ali Sabry assured the parliament of Sri Lanka that the same would be true.

Three human rights abuse alleged parties were appointed as government ministers by President Wickremesinghe on September 8. Sivanesathurai Chandrakanthan, better known by his nom de guerre, Pillayan, was a member of a separatist Liberation Tigers of Tamil Eelam (LTTE) unit before defecting to a pro-government armed group responsible for the kidnapping and enlistment of child soldiers. The attorney general dismissed murder charges against him in 2001, stemming from a slaying of a lawmaker in 2005. Lohan Ratwatte, a new minister, resigned in September 2021 as prisons minister after he threatened inmates with a gun. Sanath Nishantha, the third, is being questioned by police regarding a May 9 violent attack on anti-government protesters.

According to Ahmed Adam, manager of the UN advocacy programme at FORUM-ASIA, “these ministerial appointments show that the Wickremesinghe administration cannot be expected to credibly pursue accountability for human rights violations or uphold the rule of law.” To protect the rights of the people in Sri Lanka, the Human Rights Council must adopt a “robust and clear-eyed resolution” to address the current situation, which is “alarming.”

The organisations wrote to the member states to demand that the new Human Rights Council resolution address human rights violations and threats in Sri Lanka as a result of the current crisis. Government should be urged in the resolution to do the following:

Allow people the freedom to peacefully demonstrate and express their opinions without fear of being retaliated against or arrested;

Stop targeting and intimidating people who are thought to have participated in or supported the recent protests, and stop making arbitrary arrests;

The Human Rights Commission and the Judicial Branch must regain their autonomy.

According to Amnesty International’s South Asia director Yamini Mishra: “We have seen successive Sri Lankan governments make commitments to the Human Rights Council that are then broken or disavowed.” The UN’s mandates to monitor the situation and pursue accountability for past abuses should be renewed and enhanced, and member states should put pressure on Sri Lanka to live up to its commitments and demand immediate action to stop the abuses.

This IMF agreement will be shared with the cabinet, opposition leader, and committee chairs: