‘Kumar Gunaratnam’ comes out at a crucial time! Discuss revolutions in terms of the struggle! Many hidden messages laden in the story! (VIDEO) 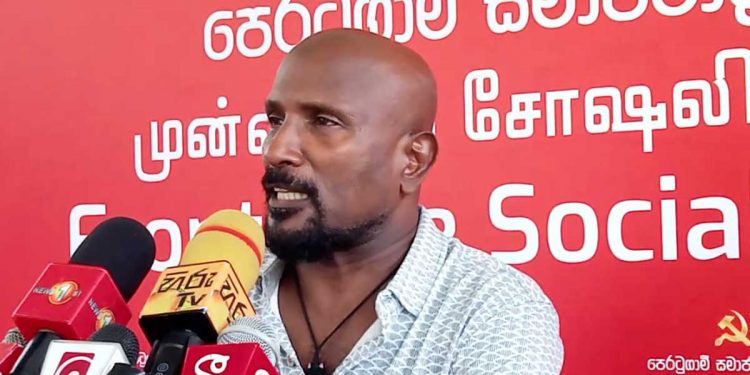 Mr. Kumar Gunaratnam, the leader of Vanguard Samajwadi Party, said that the general election and the referendum for a new populist constitution should be held at the same time.

Attending a press conference, he pointed out that once again the President has presented a budget keeping in mind the previous failed economic vision.

Bringing the budget proposals, Ranil Wickramasinghe states that he expects to continue the same system introduced 44 years ago as the open economy.

Many parties are promoting an idea and illusion that an election can change everything. The opposition groups are working hard for that.

At the same time, the government and some opposition parties are spreading the illusion that the country can get rid of this economic crisis and make the country prosperous by implementing the proposals of the International Monetary Fund.

One thing is clear, Ranil Wickramasinghe, who came to power through the back door, or the people who have been denied the mandate with him, cannot solve the serious socio-economic crisis and political crisis that the society is currently facing. Therefore, the people should be given an opportunity to democratically choose their representatives. An election is necessary for that. But we know that under the current situation, such an election is also an opportunity to protect power again.

We say, at this moment, one of the main political factors that led to some political change in our country was the people’s struggle. The popular uprising. We say that trying to read the current moments of Sri Lankan politics by avoiding this struggle is turning your back on reality. At present, the situation of suppressing the activists led by the government has been created with the desire to preserve power. All actions against the struggle are an expression of it.

Therefore, it is our view as the vanguard socialist party that the proposal made by various parties to check the public opinion through the general election should be in line with the future developments of the struggle.

There is currently a demand in the society regarding a general election. Political parties intervene for that. We say that after July 20, when Ranil Wickremesinghe came to power through the back door, there is no doubt that he has no mandate. But the whole country knows that the common front and the ruling party do not want any election. Therefore, they will make every effort to stay in power without holding an election. This is also shown in the preparations to postpone the local government elections. An election is necessary. But we know that under the current situation, such an election is also an opportunity to protect power again.

Examining a new referendum is mandatory in the current context and an intervention on behalf of the people’s demands in the struggle should be applied in an election. It can be done by engaging the political aspirations of the people of this country during the struggle in a general election. For that, the proposal of the Frontline Socialist Party as a party is to hold the general election and a referendum together.

Such an election is necessarily connected with the struggle. Today, the discourse on building a people’s power outside the parliament as a way forward for the demands of the Galle face struggle has become a conversation in the society. This discourse itself is becoming a political agenda for a democratic system. Various parties involved in the struggle as well as the general society are actively participating in that discourse.

We as a party accept the proposal of a power outside the parliament and express our support for it as a democratic program. As the vanguard socialist party, our party has positions for a socialist policy. We are working as a party according to a program to achieve that goal.

Although it is our political program, we continue to stand for this as a positive political development. The program that we are presenting to face the current crisis is one that contains the program presented by the forward movement of the struggle.

We see it as a political mistake to avoid the politics of the struggle and reduce the solution to the overall crisis only to a demand to hold old-style general elections. Therefore, ignoring the public uprising, which was the biggest political phenomenon in Sri Lankan history, would, be such a political mistake as underestimating all the sacrifices made by the common people in that public uprising. We, the Frontline Socialist Party, have decided not to allow that mistake to happen.

Its real owners are the common people who participated in it regardless of party color. Therefore, it is a mistake to reduce everything to an election through a promise sheet like we will once again fulfill the aspirations of the people. Every political party was supporting the struggle in various ways but now they are working according to other objectives. The position they had at the time when they thought that the people’s power was active in the struggle, now they think that the struggle is not so active, so they have come to the positions of opposing the struggle. Due to this, the political nakedness of some political groups is being revealed after the struggle.

Slogan emerged from the struggle, “No 225!” They do not even seem to have understood the political idea of ​​the said slogan correctly. The curse of 74 years cannot be ended by reviving the old system once again. The people demanded a change in the entire system, not only the leaders of the existing political authority, the parties. We are not saying that the people demanded socialism. But anyone with common sense understood that there was a rejection of the existing system. Therefore, basic political and economic changes have to be made. It is a necessary condition.

Before Ranil became the presidential from the back door, the demand of the people’s struggle was to establish a working order with a temporary short-term government. But now that need has become stricter. Therefore, if there is a general election, it is our suggestion that a work order based on the need of the people’s struggle and political economic demands should be presented during the election.

People should be aware of the law passed by them. They said, “We will make a new constitution”, but now we cannot believe what they will do after coming to power. We hope that the Vanguard Socialist Party will do an activity to educate the people throughout the country regarding the inclusion of a populist constitution. It is essential to completely abolish the executive presidential system, completely revise the electoral system, and include matters related to economic democracy in the basic law of the country.

Also, we suggest that services such as education-health-transportation should be declared as basic rights of the people, a fundamental transformation of the tax system should be included, and proposals should be included to provide a permanent solution to the national problem. We do not say that these things should be done because of what we say. Like us, many political parties and groups presented proposals in this people’s struggle and accepted by many political parties.

Therefore, we definitely say that a political program involving the people should be brought forward.

The activeness of the struggle may have weakened somewhat. But neither the president who came from the back door nor the groups that stood around him and made plans for their old power politics have been able to deliver anything that the people demanded. The people involved in the struggle should move forward through a political process that is active for their goals. For that, we strongly believe that a political program related to the struggle should be carried forward in the next election.

Throughout the past while talking about the issue related to democracy in Sri Lanka, the government structure we know in political science is the executive, legislative and the judiciary. But in this public uprising we have seen the emphasis on Janabala has come forward as a new tower. The struggle in which lakhs of people participated has forced us to change our political parameters. With that, the traditional criteria of politics have changed. Now it is no longer possible to forget the people’s power that arose and ignore that power and go to the usual way.

It is bad that that power does not remain active. But it should actively maintain the people’s power and struggle and protect its power as continuity.

Accordingly, we stand for a short-term victory for the people who demanded a system change with participatory democracy as a stable political power structure operating outside the parliament.

We believe that the 74-year curse of representative democracy, which has been operating as a sham without any solution or comfort for these outdated people, can be ended by involving the people in a political activity related to participatory democracy. An unavoidable people power structure that can be used even to make decisions about the country’s economy is going to enter the political arena in that way. However, when these general proposals were presented in the recent people’s struggle, some people issued statements to slander and express fear. But we say. It is our belief that everyone who believes in the rights of the people and is anti-democratic will support this.

Today (21) in Parliament, opposition leader Sajith Premadasa proposed six recommendations to put the nation on the correct road. The solutions were provided by tabulating facts and data accurately.(VIDEO)