Keila Fraser was raped or abused? Did she break the law of the country? Is she hiding somewhere? Who is being truthful? Will Keila Fraser put the government under pressure? 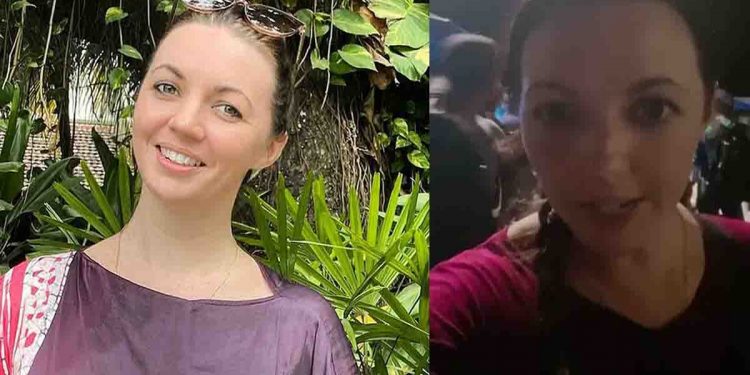 Keila Fraser said four people in your country have abused and raped me. I went to the Tourist Police in Colombo Fort and complained about the abuse and violence, confident that they would conduct a thorough investigation and provide justice to me because I am a foreign woman. However, the fort’s tourist police had turned over the investigation to the Weligama police. Two months later, I received a summons from the Weligama police.

When I arrived at the Weligama police station, the officer led me into a room. I saw the four men who had abused and molested me there. That scene frightened me. That fear turned into excruciating agony when the police, along with them, threatened me with giving a statement and a document stating that the complaint I filed was false. When I wailed and cried, they made fun of me and began mockingly laughing at me.

I wondered if Sri Lankan law enforcement officials behaved in such a deplorable manner when it came to violence against women. If this could happen to a foreign woman, I wondered what it would be like for a Sri Lankan woman. Of course, I felt a deep disappointment that I couldn’t put into words…

Did you think the preceding statement came from a Sinhala movie or TV drama? No Those who have seen it already know that the statement was made in a video posted on a social networking site by British journalist Kayla Fraser, who came to report on the Galle face struggle.

Those who do not follow the news on social networking sites may be unaware of Kayleigh Fraser’s existence. As a result, we will document some information about this foreign woman. Kayla Fraser is a British journalist, according to media reports. Similarly, a social worker is on a social mission. Where does injustice strike people in any country? As a journalist, she was a voice for the people against the ruling system, which intervened in many places. Not only that, but she also took on the mission of informing the world about the injustices occurring around her.

In reference to “your country” in the preceding statement, journalist Keila visited Sri Lanka in 2019… This journalist stated that she came to this country as a foreign journalist to help the citizens who are beaten by politicians almost every day.

Kayla Fraser investigated Sri Lankan politics and interactions with others in relation to various projects. She visited Sri Lanka on occasion until the Galle Face struggle began after the Gotabaya Rajapaksa government destabilised the country. When the struggle reached a climax and created an atmosphere, it did more good than expected. This young foreign speaker was on a mission to inform the world about the details of the conflict.

I’ve been fighting alongside the people of the struggle since the beginning. This made me deal with every attempt by the government to put an end to the struggle. Had to stay until the battle was over and the tents were attacked. I also informed the world about the most recent attack on the battleground.

The first theme of my media mission is to stand in solidarity with oppressed people who have suffered as a result of injustice. To speak up for them. They raise their voices to demand justice, not to overthrow the government or bring the country into disrepute. That was the point of entering the conflict.

Kayla Fraser made the above post on a social media platform. She made such a remark in response to the severe injustice she has experienced at the hands of the Sri Lankan government.

What exactly is the injustice? According to the government’s charge against Keila, “Keila Fraser incites people to overthrow the government.” Sri Lanka and the government have brought themselves into disrepute by presenting information to the world in such a way that something that happened during the conflict was exaggerated beyond the truth.

Based on these facts, the Sri Lankan government has charged Kayla.

Did this young British journalist claim that the allegations were unjust? No Given the charges filed, Kayla Fraser has been ordered to leave the country immediately, and the government has revoked her visa, preventing her from returning to Sri Lanka.

What made the government so concerned about this British journalist?

It should be noted that the reasons for this are still unknown. Although the government has not issued a statement regarding the treatment of the foreign journalist, a journalist from a national newspaper recently questioned Minister of Mass Media Bandula Gunawardena about it at a press conference. Minister Bandula Gunawardena’s response to that inquiry

Kayla Fraser’s case is far from over. Making a statement is difficult until a decision is made.

This was Minister Bandula Gunawardena’s response.

Is Kayla Fraser truly a trailblazing journalist? Did she fabricate non-existent disputes in order to bring the government and Sri Lanka into disrepute?

Ranil Wickramasinghe’s administration has declared and accused her of this.

Kayla Fraser, do you have anything to say about this?

“In any case, I am delighted to join the Galle face struggle.” Its battles and heroic memories will live on in my heart forever. And I urge the youth of this country not to give up the fight. In any case, I’m leaving disappointed. ‘I deeply regret how the people of this country treated me when I came to serve them.’

This is Keila Fraser’s social media post following the suspension of her visa.

Did the legal community, which has always supported the struggle, take any action in response to Kayla’s injustice?

That’s unexpected. I’m not sure why the legal community is remaining silent on Keila’s case. Does this imply that there is some underlying reason why they are unable to intervene in this matter?

There is no mention of this anywhere. Even the government does not appear to have made a statement in this regard. But it is a unique event that attorney at law Nagananda, who ran for president in 2019, made a special statement about the said British journalist on social media and took great responsibility for the justice that should be done to her. Why is Nagananda, a lawyer, in the middle of such a big responsibility for Keila?

Some people have begun to discuss it. They claim that the British bribed him with crores of rupees for this. Is this statement true?

To be honest, seeing how the Sri Lankan government treated British journalist Keila Fraser demonstrates how brutal and inhumane we Sinhalese are. But, as a law-abiding citizen of this country, I cannot do so, regardless of who cheated on her. Some people believe I’m doing this for a bribe. I became involved in response to the British government’s respectful request that I speak up for her.

It is an honour for me to speak out for the foreign journalist who was raped and abused in our country. Nobody knows what harm she caused to the President and the country’s 225 parliamentarians for them to discharge such inhumane treatment on her. If speaking out about the struggle and making the news is what gets visas revoked, how many more criminals should be prosecuted among the 225?

Those who supported the statement included those who opposed it and supported his mission, as well as those who mocked it.

Kayla Fraser claims she was raped and molested in Weligama.
Did the Weligama police attempt to conceal the crime? Her mistake in reporting the struggle resulted in her visa being cancelled and her expulsion from Sri Lanka. These questions have yet to be legally addressed. Is Kayla Fraser a good person? Is this a harmless ruse?

Those questions are still unanswered. Maybe someday there will be clear answers. Otherwise, this phenomenon, like so many others, will be forgotten.

WHO pledges $4 million worth medical supplies to SL