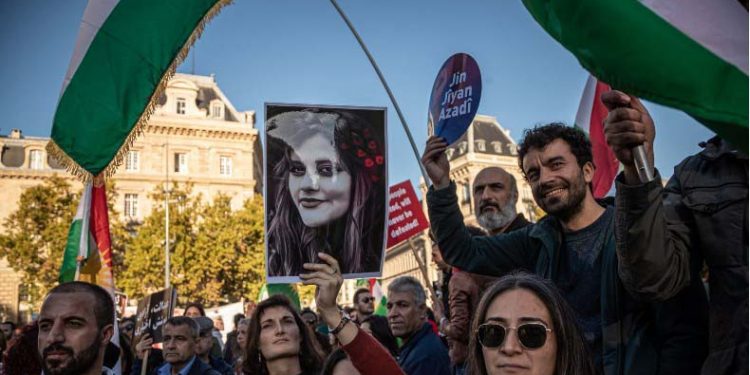 Iranian activists called for nationwide protests Wednesday in response to a bloody crackdown on demonstrations over Mahsa Amini’s death that a human rights group says has killed at least 108 people.

“Be the voice of Sanandaj,” said a flier distributed by protest organizers and seen online, referring to the city in Amini’s home province of Kurdistan where security forces have been accused of shelling neighborhoods.

Protests have swept Iran since Sept. 16, when Amini died after falling into a coma following her arrest in Tehran by the morality police for an alleged breach of the country’s strict dress code for women.

Activists have called for protesters to turn out “in solidarity with the people of Sanandaj and the heroic people of Zahedan,” a southeastern city where demonstrations erupted on Sept. 30 over the reported rape of a teenage girl by a police commander.

The nationwide protests over Amini’s death have seen young women, university students and schoolchildren remove their headscarves and face security forces on the streets.

“Woman, life, freedom” and “Death to the dictator,” they have chanted, in the biggest wave of social unrest to grip the country since violence erupted in 2019 over a fuel price hike.

Oslo-based group Iran Human Rights (IHR) said the crackdown on the Amini protests had left at least 108 people dead, and that the security forces killed at least another 93 people in Zahedan.

The IHR indicated its investigation into the extent of the “repression” in Kurdistan province had been hampered by internet restrictions and warned of an “impending bloody crackdown” on demonstrators in the western province.

The group said it had so far recorded 28 deaths in Mazandaran province, 14 in Kurdistan province, 12 in both Gilan and West Azerbaijan and 11 in Tehran province.

The toll excluded six deaths reported to have occurred during protests inside Rasht central prison in Gilan province on Sunday as it was still investigating the case.

The IHR said workers had joined protest strikes at Asalouyeh petrochemical plant in the southwest, Abadan in the west and Bushehr in the south.

Analysts say the multi-faceted nature of the protests – ranging from street marches to student strikes to individual acts of defiance – has complicated the state’s attempts to quell the movement.

This could make the protests an even bigger challenge to the authorities under Supreme Leader Ayatollah Ali Khamenei, 83, than the November 2019 protests.

In its widening crackdown, Iran has blocked access to social media, including Instagram and WhatsApp, and launched a campaign of mass arrests.

Ahead of Wednesday’s protests, online monitor NetBlocks reported a “major disruption to internet traffic in #Iran” from around 9:30 a.m. (6 a.m. GMT).

“The incident is likely to further limit the free flow of information amid protests over the death of #MahsaAmini,” it tweeted.

Iran has accused outside forces of stirring up what it calls “riots,” as solidarity rallies have been staged worldwide. The United States, European Union and other governments have imposed new sanctions on the country.

At least 28 children have been killed in the protests, and hundreds more have been detained mostly in prisons for adults, rights groups inside and outside the country said.

The Tehran-based Children’s Rights Protection Society, which gave the death toll for minors, condemned security forces for resorting to violence against children.

It criticized “families being kept in the dark on their children’s whereabouts, cases proceeding without lawyers and lack of children’s judges and police”, and said the government must be held accountable.

Revolutionary Guards deputy commander Ali Fadavi told Iranian media on Oct. 5 that the “average age of the detainees from many of the recent protests was 15”.

Human rights lawyer Hassan Raisi said “around 300 people between the ages of 12-13 and 18-19 are in police custody,” some of them in detention centers for adult drug offenders.

In addition, Iran’s judiciary said more than 100 people had been charged over the Amini protests in Tehran and Hormozgan provinces alone.

Iran said an investigation found Amini had died of a longstanding illness rather than reported beatings.

Her bereaved parents have filed a complaint against the officers involved, and one of her cousins living in Iraq has told Agence France-Presse (AFP) she died of “a violent blow to the head.”