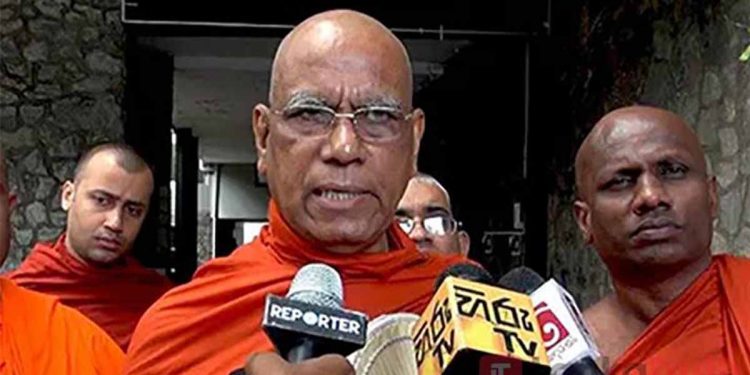 It is against the increased electricity bill. The monks of Bodhiraja Dharmayatana participated in the protest. After the protest, Omalpe Sobitha Thero spoke to the media.

Now in England too, the electricity bill has been increased indefinitely, and the people of that country are standing up and signing petitions by the hundreds of thousands. Now nobody pays the electricity bill. This should also be done in Sri Lanka. We will start very soon a great program of non-payment of bills under the Gandhi system. Don’t let this government do what it wants to do.

Electricity Board fines religious centres. Not a small amount, five hundred percent. At this time we will not, cannot, and will not pay these electricity bills. At this time, the leaders of temples, churches, temples and all other religious places should come together without any discrimination. Together we must stand against this electricity bill increase. Objection should be expressed.

We have to light coconut oil lamps and wax torches when performing religious activities. Is this government trying to remove people from religious ceremonies? Now the education activities of these little Hamurus have to be done by lighting lamps and candles. Can’t do that. The President of the country has a responsibility and cannot cover the losses of the Electricity Board by doing this kind of work. Take that wealth back from the people who stole the national wealth of this country and settle these losses. Otherwise, we will not fine all of these little priests.

Is this government doing anti-religion by an invisible hand? If there is even an iota of justice and fairness, immediately reduce the heavy electricity bill on these people. To cover the budget deficit, get the stolen wealth back to the Treasury without being fined.