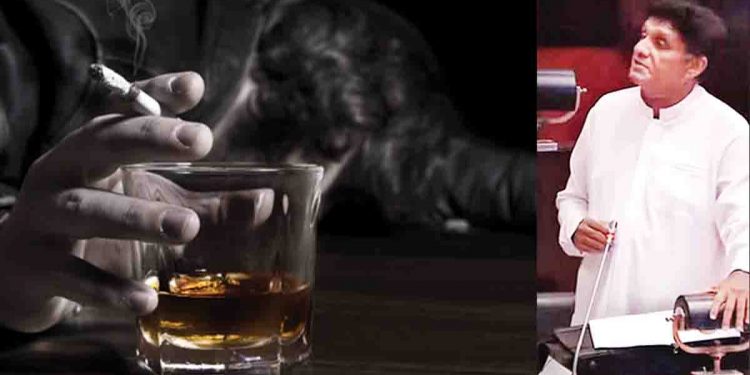 Is the cigarette and booze mafia holding politicians hostage?

There is a disease prevention and control agency called the CDC in Atlanta, USA. As mentioned on this website, one person dies from smoking cigarettes after spreading dangerous respiratory diseases to 20 others around him. It is said that the number of deaths per year due to smoking is fifty lakh in America alone. There are predictions that this number will be eight million in 2030. This is America’s calculation. It is worth guessing how many there are in the world. The tobacco industry was considered a dying trade 5 years ago. But cigarette companies have given it a life. The industry is on the mend again. It happens very secretly, anyway.

The government agency entrusted with the responsibility of finding solutions to the economic crisis in the country is the Ministry of Finance. Although efforts should be made to increase the income received by the government through the implementation of proper tax policies, unfortunately, the strategy implemented in the last few years was beneficial to the tobacco company. As a result, the country lost a lot of tax revenue and the tobacco company accumulated profits.

Various positive efforts to correct this situation in the past years have failed due to various forces operating through the Ministry of Finance.
It is a serious mafia. By defeating the existing mafia, efforts should be made to correct the tobacco tax policy that is disadvantageous to this country through the intervention of the relevant authorities.

Many claim that smoking has decreased over the past few years. Accordingly, cigarette production has decreased by 45% in the last 10 years. But the profit earned by Ceylon Tobacco Company (CTC) has increased by 121%.

The profit of the tobacco company has not decreased because the production level has decreased. It has increased day by day because a scientific tax policy is still not followed in relation to cigarettes. A large amount of tax money, which could be collected by the government, has become the tobacco company’s profits.

Almost every country works to discourage drug use because protecting people’s health is an element of the economic and social development process. Almost every government in this country took various measures to reduce the use of drugs, cigarettes and alcohol. Although the legal use of alcohol and cigarettes has decreased due to those measures, the use of illegal drugs, cigarettes and alcohol has reportedly increased.

Although the promotion of state revenue through taxation of cigarettes and alcohol is the aim of every government, there is no firm policy on taxation of alcohol and cigarettes in this country, corruption in tax calculations as well as irregularities in the payment of taxes by tobacco and alcohol manufacturing companies, the government is losing a large amount of tax revenue due to it.

Therefore, it is timely to adopt a national policy on drugs, tobacco and alcohol aimed at drug prevention, reduction of health costs and income stability in order to improve the health status of the people. For that, the use of alcohol in Sri Lanka should be minimized by making recommendations and implementing them as soon as possible. Moreover, it is also essential to maintain a proper standard for the consumption of tobacco and alcohol by the people in formulating policies. And taxes on all alcoholic beverages should be increased with proper regulation. It should be put into a formal mechanism in the calculation of taxes on cigarettes and alcohol.

This is a problem of national importance. Mr. Sajith Premadasa, the leader of the opposition, questioned the government under 27/2 in Parliament. There were several issues that he emphasized there.

What is the government’s policy on reducing tobacco and alcohol use?

It was reported that the National Authority on Tobacco and Alcohol (NATA) tried to introduce a new tax formula for taxation of cigarettes, drugs and alcohol, but it has not been implemented so far. Will the government introduce a tax formula to increase public revenue and reduce the use of tobacco, drugs and alcohol? What are the steps taken by the government for that?

How much has the government had to bear for the health sector due to the use of cigarettes and alcohol last year? Is it an increase compared to the previous year? or a decrease?

As mentioned in the National Authority on Tobacco and Alcohol Act, although advertising about tobacco and alcohol through the media is prohibited, there are various indirect advertisements. Has the government taken measures to prevent such indirect advertising? what are those
Does the Ministry of Education implement a program to provide children with smoking and alcohol prevention education? Has there been any evaluation of the program? If so, is there any progress?

It is not yet known how the government will answer these questions.

The fight against the drug menace is a general trend in the South and Southeast Asian region in 2018. Indonesian President Joko Widodo intensified the fight against the drug menace in his country in 2014. Widodo was able to implement this policy because a strong public opinion was built in favor of it. Stimulated by that, he introduced the drug menace as the main crisis in the country. The Philippine president also made the process used in Indonesia the main nucleus of his presidential campaign program. Governments around the world and organizations such as the World Health Organization (WHO) are working hard to reduce the use of cigarettes and accelerate efforts to stop smoking altogether. Cigarettes are a huge blow to the health and economy of any country.

In such a situation, allowing the cigarette companies and drug companies in this country to dance as they please will only lead to the future of the country’s people being shrouded in darkness.