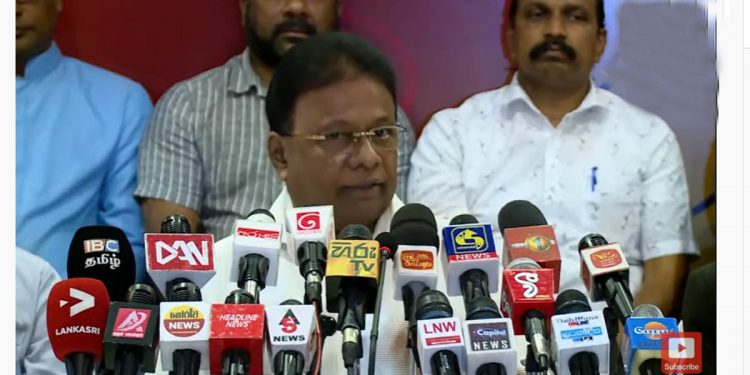 Addressing a letter to the Prime Minister, Dinesh Gunawardena, Pohottuwe MP Dullas Alahapperuma has said about focusing on effective hate indicators in the appointment of parliamentary operational committees.

The letter reads: “Dear Prime Minister, Consideration of forceful hate indicators in the appointment of Parliamentary Steering Committees. In appointing MPs for operational committees after the end of the terms of Parliament by the new President, the government has worked diligently not to re-appoint many of the people’s representatives who directly supported me in the presidential election held on July 20 and worked actively for it.

All of them who have been subjected to political punishment in such an indecent way are public representatives who have appeared unconditionally to expose the fraudulent and illegal activities of the government, so I will first of all record my regret, protest and disgust for it.

It is understandable. However, the removal of the president of the party, Mr. G. L. Piris, who was proposed as my name for the Sri Lanka Podujana Peramuna, and an internationally recognized intellectual who represented the committee for a long time like me, as well as lawyer Dylan Perera, who was my counting agent in the presidential election, and The dismissal of Dr. Nalaka Godaheva, who was one of my election operation committee chiefs, from the Accounts Committee, who considered both parties as a national responsibility and worked with great dedication, is certainly a violation of the principles of natural justice and people’s sovereignty.

Although it has not been announced by the Speaker, in addition to the above-mentioned cuts, the name of Professor Charita Herath, who has won public respect for his inflexible anti-corruption policies as the Chairman of the Public Enterprise Reform Committee (COPE), has also been taken from the government register and forwarded to Parliament. , it is no secret to you that he represented me as a head of the Presidential Election Committee.

Also, Dr. Gunapala Ratnasekara, who was represented in this committee, has also been angered by the government due to being one of my closest supporters.

Honorable Prime Minister, while on the one hand the Honorable President proposes to set aside all differences and form an all-party government for the building of the country, on the other hand, the hunting of his main opponent and his close associates in the presidential election is reflected again and again. Aren’t the ailing Sri Lankan heroic politics a waste?

Thus, it will surely be clear that what the Honorable President has unveiled as a manifesto 21 days ago is nothing more than an empty plagiarism. Therefore, please kindly accept my definition that while speaking loudly about populism and libertarian policies, the Parliament which is considered as the source of democracy, is being implemented quietly inside the parliament, replacing democracy with “democracy”.

Honorable Prime Minister, it is a pleasure to be able to identify the hypocrisy that is evident in the fingers of many people who shake hands as friends in Parliament. It is certain that those happiness are giant powers that provide us with encouragement, strength and security. Therefore, we have unanimously decided to look forward to the future, despite all the hardships.

It is my sincere belief that you will accept this letter as a “bullet” against the duplicitous practice of the current dual governance, not as a plea or a plea for the purpose of hurting anyone’s heart or as a request for the lost positions of any of us. Finally, I will end this post with a few timeless words of the great Martin Luther King, who is revered by you and me as a unique figure in the fight against human rights and oppression.

“You don’t need war to create enemies. All that is required is to present your thoughts”.

Thank you very much,

SJB is ready to help the country without ministers! Sajith (VIDEO & PHOTO)