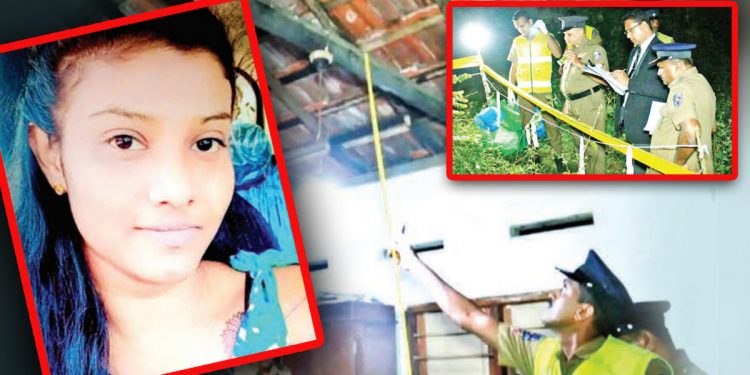 Since their birth, parents have raised their children with love and care. However, the chances of them getting closer with ‘love’ are higher when they receive it from someone else, such as a boyfriend or girlfriend.

That boyfriend or girlfriend who falls in love in this way establishes a stronghold in their heart. When considering how many people could fulfill their love dreams as they wish, it is very sad to note that things do not always turn out in a happy note. Many young people nowadays are obsessed with money or sex. In today’s society, good virtues have been lost. Many people today are unaware of the true meaning of the word love. As a result, the number of people who suffer and die from love has increased fast.

A girl who fell in love with many hopes on her lover hanged herself recently in the Wayangoda area, confirming the pathetic plight of love mentioned earlier. This tragic incident occurred on November 18th, around 7.25 p.m.

‘You dragged me into false things and now don’t come and knock on to my window this time, I won’t open it.

Thank you so much. I love you, and you will be eternally grateful for what you did. This is my last message. I’ve always wanted to be with you. But you tried to frame me for something I didn’t do. You’ve caused me so much grief. Please don’t think I’m lying. I won’t be there to greet you the next time when you visit; I’m leaving ‘Sudu,’ it’s true… For the last time, I’m speaking to my mother. I didn’t say anything. Though, I’d like to speak. But not speaking.

I will not contact you again… I adore you… You will truly suffer for what you did to me one day. Thank you for causing me so much pain, accusing me of things I did not do, and making me feel so helpless in the absence of love. It will increase your merits. Take into account what you did one day. ‘Be cheerful…’

After receiving this message, this boyfriend called her several times, but she did not respond  even to a single call. Accordingly, the boyfriend, who acted immediately, had come with his friend on a motor bicycle to the rented house in Wayangoda Danvilana, where the girlfriend resides. Investigations have revealed that the boyfriend used to bring her food three times a day, and on the day of the girl’s death too, he had brought her food.

However, disturbed by the girl’s WhatsApp message, the boyfriend went to her house and knocked several times on the door, but it was not opened, so he asked the owner of the rental house where the girlfriend lived. However, the house’s owners claim they have no idea whether the girl is present or not. As a result, the boyfriend climbed to the house’s roof, removed some tiles, and went down into the room, where he discovered his girlfriend hanging herself from the bed sheet.

He immediately took action with his friend and left on the motorbike to rescue the girl and transport her to the hospital. The motorbike unexpectedly ran out of fuel while transporting the critically ill girl. As a result, the two men abandoned the motorbike and the young woman in a desolate area of Nittambuwa Pinnagollawatta. Following that, the boyfriend went to the Wayangoda police station and stated that while transporting the girl to the hospital, the motorbike ran out of gas and he abandoned her in the forest. However, during the police investigation, it was discovered that the two youths who arrived on the motorbike had surrendered to two police stations following the incident.

CCTV footage shows two young men riding a motorcycle with a young woman. The scene was also examined by police investigators. According to the police, the girl had sent some photos; she has taken to her boyfriend. According to the information provided by the  youths, the young woman’s body was discovered, along with an injury caused by her right leg being stuck in the motorcycle’s silencer.

In the meantime, the owner couple of the rented residence had also filed a missing person’s report with the Wayangoda police. There, the police officers grilled the couple at length, and they were required to disclose the incident’s facts. They had admitted to the police officers that the young woman was not missing and that her boyfriend and another friend had entered the room through the roof, removed her from the noose, and fled on a motorcycle.

Sachini, who died in this manner, had started a romantic relationship with this young man approximately a year ago, and it has been disclosed that she was living apart from her parents in a leased property due to their severe objections. The police inquiry discovered that she worked in a garment factory and that her boyfriend frequently visited her there.

In accordance with the directives of the Acting OIC of Wayangoda Police Station, Inspector Weerasinghe, the officers of the Criminal Division, including Police Inspector Sunil Premaratne, investigated the death, and the post-mortem examination was conducted on the 19th by Judicial Medical officer Dr. Ramesh Alagiyawant to of Watupitivala Hospital. It was confirmed that the internal organ damage caused by hanging was the cause of the girl’s death.

Sadness, happiness, and pain are all laden in the lives of people. It was only from our parents that we experienced constant love. When we were down, our parents were our rock of support. We must develop resilience in order to deal with life’s unexpected problems. Always keep in mind that relationships are only temporary. It will be easier for us to live if we think and behave this truth of life. We don’t come here to live for hundreds of years. Live a lovely life and then leave this world happily.

The boyfriend or girlfriend should be aware of their obligations and try to live happily ever after. The true victory in life is when young people are able to get away from those lives, strengthen their hearts, focus on a righteous lifestyle, and make up their minds instead of suffering because of a lover who is not suitable for them. However, in the face of such problems, today’s youth are heading in the wrong direction. It is clear from the incidents reported on a daily basis that they are tired of dealing with mental problems and end up developing serious mental illnesses such as depression and committing suicide.

Always consider ways to appreciate the beautiful life we have.

Sachini taught the present generation of lovers a vital lesson. Do not mess with the emotions of young people, was Sachini’s message. You gave up your entire life for love. You deserted your mother and father, and left the house without any concern for them. Expecting that your partner will love you more than your parents did. But when your hopes for love fade away, you must have felt helpless a thousand times when it did not materialise.

When things became unbearable, you had to give up everything. However, Sachini, if you had dealt with these issues wisely, you would still be alive today. We at  ‘Mawrata’ wish from the bottom of our hearts that you will not inherit such an untimely death in any of your future births.

The Construction business is doomed! Masons now on the road! (VIDEO)