Damita Abeyratne tells the Mawrata where the arrest warrants originated from. 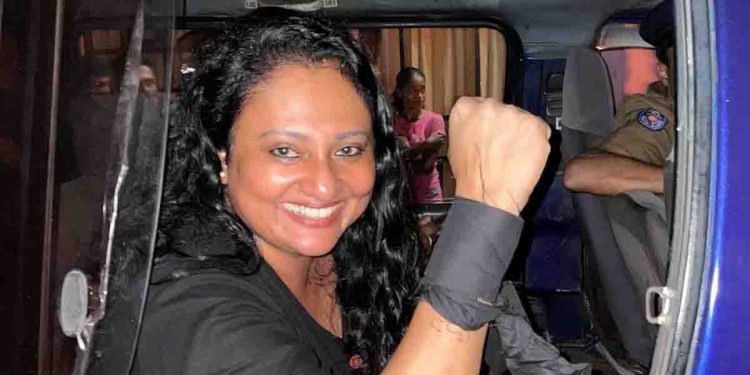 How she was trapped on the highway, why she became sick in jail, and what her next step is.

Damita is acting too much…’It has been published several times on social media that the ministers of the ruling party have been talking in public as well as among themselves during the last few days. When you think about it, sometimes there is nothing wrong with that saying.

This is because Damitha was a very talented actress who gained international fame, and her performance was far ahead than the average actresses.

That is the reason why the government developed a rage against Damita and locked her up. However, Damita did not fold her limbs in fear of being locked or twisted. Her voice was not locked. This talented, popular actress and activist raised her voice again and again from the moment she got her freedom. Without any fear, she started pointing the finger at those responsible and saying what she had to say with salt and sour.

So Damita how is life in prison…?

What brother Ranjan told is complete truth. Of course it’s a hell. There are many things that have not yet been done for the detainees. I will do my best to inform those responsible for it to put things right.

What do you have to say about the allegations levelled against you?

It can be answered very simply. I did not turn my back on the law. I did not try to overthrow the government. The police were not hindered from doing their duty at any place. I even intervened with some people who tried to do something against the police during the struggle to keep them away from the police.
I did not want to take the law into my hands to overthrow the government. My goals were to be a voice for our own who are in the middle of a common struggle for the milk packet for the hunger of the children and oppressed people of this country. I don’t know if that is a crime worthy of imprisonment.

You came to Modara police to give a statement and they said you missed it.

Outright lies. when the O.I.C informed me I said I will walk to the police station and give a verbal answer. I told him that I will come on the morning of the ninth. Boralasgamuwa police also approved my request and sent me a document about it. And my lawyer also told the OIC about it. So how can it be I missed the police to give a statement. I did not I avoid going to the police? All those made up stories. The truth is they wanted to suppress my voice.

Did you mean the gentlemen of the police?

No. I accuse those who are in the big chairs in this country. They themselves give orders to the officers. Officers also submit to that order. I think they feel helpless there too.

you were rudely arrested because they received higher orders that way?

Definitely yes. The protest we did near the parliament on September 7th was very quiet and peaceful. We want to provide relief to the people by reducing the rising prices of goods and electricity bills. Nothing against the law or condemning the police happened on that day.

When we were about to leave after finishing the work, the crowd dispersed and the police took me alone and locked me up. When asked what the charge was, they said that I obstructed the police. I couldn’t even imagine. What is going on? I was treated like an animal there. I was not allowed to call home or my mother. When I was about to take a call, an officer who was there ordered a female police officer to take my phones.
There is nothing to ask. Get the two phones…’ he said. Someone posed a big part saying, ‘Buy and buy get the two phones here’.

Didn’t you get relief even when you got sick in prison?

Yes. The doctor told me that I have high cholesterol and to take medicine immediately. Even when I had the prescription given to buy medicine in my hand, an officer who was there said,

I can’t let you buy medicine now.’ I asked them why they are doing this.

She said, ‘We work for higher orders, beyond that we have nothing to do.’

Did you get an order to put her in the pile of dirty women in prison?

I will not label any inmate in the prison as ‘dirty women’. A high-ranking person in our country has been labeled as ‘dirty women’ and ‘bad women’. But I am happy to say that the chief jailer did not give me the place that the above people told them to give. Even though it was ordered to put me in the worst pile of women, in the dirtiest place, she directed me to the place where there were a group of women who had been sentenced to death.

Didn’t you feel blocked in that cell?

Not at all. They treated me like a queen. There were mothers like my mother. There were young girls like my younger sisters. I have no words to describe the way they all treated me. The story of them going to jail because of a mistake made somewhere in their life is a different matter. But they looked like gods to me. They treated me so well.

Did they treat you that way because you are a veteran actress called Damita Abeyratne?

I didn’t ask them that. They treated me like a queen. I don’t know if it was for my acting or the respect given to my voice for the oppressed people.
Why did you say that prison is hell?

Prisons are called hell not because of the people who are there. I was talking about the prison environment and activities. Toilet pits are overflowing. The food is prepared sitting there. Even the rice given to the prisoners is very dirty. To be precise, the first thing that catches our eye is the appearance of a bowl of water and the rice plate which appears as the water when we have finished washing the lentils.

It was because of those facts that prison was called hell.

What did the inmates tell you about the struggle and the behavior of the rulers of this country?
If they were to write what they did and said about this social system and the country’s governance system, thousands of newspaper pages would be needed to fill that. So there is no point in talking about such things. But there are many stories to tell about things that are not done for them. ‘Prisoners are also human’ carved in big letters on buildings it is useless. They should be treated like human beings.

I have a special story to tell for them. They told me to shout this story out and tell everyone to hear it. That story was told to me by two or three mothers who took care of me with love. They have sent to this prison 15 to 20 years ago.
Those mothers tell me that during Mr. Ranasinghe Premadasa’s government, there was a custom of releasing a prisoner every month. judging by the good work. Look for the most suitable person to release and release them. So those said mothers made a request to me, ‘If we can follow that custom again, 12 prisoners who realize their mistakes and try to be good people will be released once a year, right? Therefore, if possible, inform the responsible people about it.

So, Damita, are you ready to fulfill that request?

I will do my best for their request and everything that needs to be done for their benefit.
Did various ministers, including the leader of the opposition, come to see you in jail?
I thank all of them for that.

Do you hate the Ranil Wickremesinghe-led government that imprisoned you?

oh no I join my hands and say thank you for them. Because I was able to come to this place like a supreme university where I can gain many experiences in my life because of them. I am grateful to them for that.

Due to a struggle, you had to be imprisoned. So Damita what will be your next step?

Do you think I was scared? Do you think I’m shocked? It will never happen. I became stronger. It is correct to say that many more experiences were added to the grit that was necessary for the real struggle. The government wanted to show the world, ‘You know, we arrested Damita too…’ That made Damita Abeyratne even stronger. It always happened that our rulers did not understand the truth. Doing the wrong thing while leaving the right thing out.

Some people were hurt when I called politicians ‘miserable’. Miserable are those who eat time. So I don’t think there is anything wrong in saying that I gave them that introduction. If you look at social media, you can see that almost everyone agrees with me. Isn’t it?
Finally, if you say something….?