Children kill their moms, mothers dump their children on the road—what is the morality of the island, Buddha visited three times? 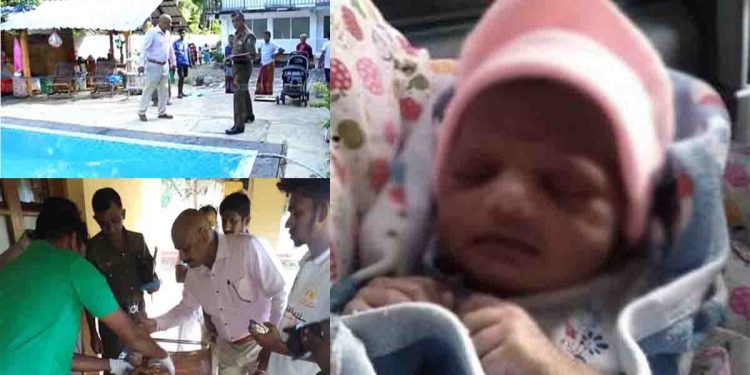 It is very unfortunate to hear such stories, which are both inhumane and disgraceful. But we are repeatedly exposed to such cruel and outrageous incidents as reported in the media.

What are the current pathways of both children and parents? The moral values of these two groups have been lost. What should be given to children in terms of love, kindness, protection, and compassion becomes nothing more than words. Some parents abandon their children on the highway, which is heart breaking. However, some mothers in this society believe that all children are the same, with no distinction between them and their own children. It’s also heart breaking to learn that some parents see their children as a curse.

Three recent news stories reported through media show how these two groups behaviour at present. Both groups are currently behaving in an abnormal manner, and it can be seen that their primary goal has been the pursuit of money, which has led to this unfortunate situation.

This news confirms that society is on the brink of destruction. Parents have to face infinite sufferings because of their children. Recently, very sad news was reported from Matara Kotuvegoda Araliya Road.

Mothers’ sheer commitment for a period of ten moths with dedication and commitment to the child to be born is enormous. Can a child murder his or her mother? According to the story, the son beat his mother with a stick and strangled her to death. This son murdered his 59-year-old mother, Fathima Harina Zubair, in the most heinous way possible.

This 35-year-old son was requesting that his mother to transfer the ownership of their home, which she had retained for life and written in her son’s name. The son requested that the house be transferred into his name completely so that he could sell it and pay off some of his debts. She could smell what would happen if she did, so she refused. As a result, the son brutally murdered his mother. This incident occurred on the 5th of last month.

This violent son had gone to the Matara police and filed a complaint saying that his mother had fallen inside the house bathroom and died. The Matara Police immediately got alerted and began investigating in to this matter. Matara Municipal Accidental Death Investigator Mr. T. M. Lalit de Silva was alerted to investigate the death. But from the moment this death investigation was begun, this son’s behaviour was more of a maniac. He told the coroner that according to his religion, burial should be done within 24 hours and no post-mortem was necessary. His relatives also said that the burial should be done within 24 hours. Even the reputed elites of the society had made phone calls and told the police that there was no need for an autopsy.

Despite all these concerns, Mr.T. Lalith de Silva who conducted the death investigation confirmed that this death was a homicide by strangulation. Apart from this, an observation report had also submitted that there were scratches and bruises on the body. After the post-mortem report, the Matara police officers got suspicious about this son and arrested him. During the continuous questioning of this son, he had to confess everything.

In order to settle a loan amount of 30 lakhs that he had taken from various people, he had urged his mother on many occasions to register the house which is registered in her name with ‘Prana Bhuktiya’ to his name. Buts she had expressed her reluctance to this suggestion. He had confessed that he planned to kill his mother and sell the house to get rid of the threats of his creditors.

According to the police, the son who planned the brutal murder brought the ‘Quran’ to her and told her to remember her religion before killing her. The mother collapsed after being hit several times. Later, this son dragged her body to his house bathroom and left the dead body there. When this son attempted to leave the house, he heard a groaning sound and decided to stay for about 10 minutes. According to police investigations, he strangled his mother, whom she had raised up to a grown up man, as a soulless individual, with his own hands because he suspected she was still alive.

After committing the murder, he had gone to his wife’s house in Colombo. Later, to the Matara Police had told the police officers through tears that his mother had fallen and died in the bathroom of the house. It is estimated that houses written for this Prana Bhukti is more than 3 crores value. It was learned that the blood-stained pole piece, Koran, clothes, etc. used in this murder were taken into police custody. He is to be produced before the Magistrate Court. Further investigation in this regard is conducted by Sub-Inspector Upali and Hemantha, Kulatunga, Premadasa of Crime Investigation Unit OIC,  Rukman Kottage on the advice of Matara Senior Superintendent of Police Mr. Nishantha De Soysa and with Police Inspector Mr. Roshan Hettiarachchi.

The second incident was that a 12-day-old baby was left in a three-wheeler in Talawakele. In other words, this child was abandoned on the road like a dog abandoned on the road. This tricycle was parked near the Hindu temple in Talawakele every day. A few sanitation workers employed by the local council heard the baby’s cries while it was left behind the tricycle. After that, they immediately alerted the police officers and a policewoman of Talawakele police with humanitarian qualities breastfed this child, treating this child as her own. Those few sips of milk gave life to keep this baby alive.

In today’s society, there is a lack of understanding about police officers. But we should be grateful that among such officers are officers with such noble qualities. The baby was later transferred to Lindula Regional Hospital and Nuwara Eliya District Hospital by police officers. According to police, this child was born between 12 and 14 days ago. The power of the word mother is demonstrated when you can be a mother to your child as well as other children. This officer redefined the term “mother” and set an example for the entire world. She deserves to be respected. There could have been a difficult problem about this child to child’s parents, but it is a disgrace to abandon children on the streets in this manner. Parents who abandon their children in this manner cry a thousand times in silence but the innocent child suffers.

Recently, a similar incidence was reported again. A woman left her toddler to play while she was cooking meals.  As a result of her carelessness, the child escaped her supervision, slipped into the swimming pool while playing, and perished in a tragic manner. This parent’s irresponsibility resulted in the loss of their child. This unfortunate tragedy occurred at a resort in Kataragama Mailagama.

This was how the two-and-a-half-year-old toddler Manippuge Kovin Vinsita died. The child’s parents own the tourist resort. This toddler was playing in the hotel courtyard on the ninth. The parents were concerned because they had not seen their child for some time. A few moments later, the toddler was observed floating in the pool, depressing everyone. The youngster was already deceased upon removal from the water.

If the parents were more concerned about their children, this child would still be alive today. Little children love water. When they see water, they touch it going down into the water. But they do not know the seriousness of this. Parents should be more careful when their children hang out in such places. It is the responsibility of parents to take care of their children like eyes. The reason why children are used in various abuses today is that parents do not pay attention to their children. This is not the first time a child has died from playing with water. This is what the officer who conducted the post-mortem on the child’s death said.

“The death of the child is a crime because it is due to the negligence of the parents. This death happened in the hotel premises. Preliminary investigations indicate that the child had an unsafe pool in the close proximity where he lived. The child has not received proper care and attention. The pool had no protection. This is a place where rooms are provided to local and foreign tourists. It is clear that the parents are responsible for this incident. This is a terrible crime…”

A few days ago, Mr. Nadika Jayasundara, who had been at this resort, stated, “We too stayed at this hotel. When he was here he had noticed this child was neglected, no one attended on him, he was just placed in a go cart and no one bothered about him. This child was two years and a few months old when we left. I told them if you leave the child in this state he will be psychologically affected. They never pay attention to the child, one have to earn for a living but this is not the way. There is a second child. This child is Less than a year…” that child also made a passenger in the go-kart”.

Parents have to take responsibility for young children of this age. Even if parents do not intentionally put their children in such danger, they should be protected like your own eyes when they are young.

Nowadays, people are chasing limitless desires and making their lives chaotic. The Buddha said that parents should always practice the four Brahma Viharanas of Metta Karuna Mudita Upekkha on their children. This incident makes it clear that people, who think that money is life, miss out on valuable things in life. When looking back, everything will be over.

MPs ask Ranil about the election during the ruling party group meeting! Here is Ranil’s reply!

The bud is in a big trouble! People want nominations ! There is fierce competitions for nominations! VIDEO 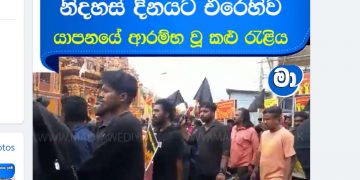 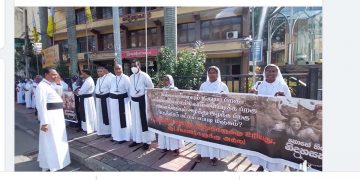 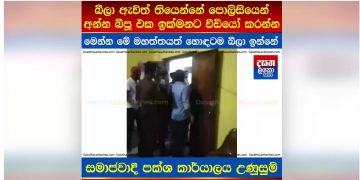 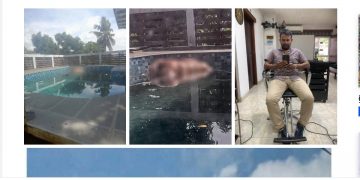