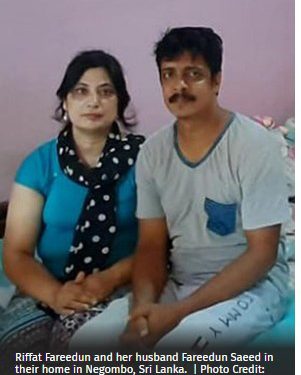 Except for some distance from threat and persecution, refugee life is far from easy.

The two large beds, with no gap in between, occupy almost the entire area of the room, barely 12 X 8 feet. The Fareeduns’ family of four has been using the space, which also has a small TV on the wall, a sewing machine, and a side table crowded with water bottles, as their living room-cum-study-cum-bedroom for nearly a decade.

From the time they left Pakistan and sought refuge in Sri Lankain 2012 — their daughters were one and three then — fleeing persecution after the couple’s fiercely opposed inter-caste marriage, the family has endured in this cramped space, amid uncertainty over their resettlement. “This long wait has been agonising for us,” said Riffat Fareedun, 39, a refugee from Karachi living in Sri Lanka’s coastal city of Negombo, about 40 km north of Colombo.

Except for some distance from threat and persecution, refugee life is far from easy. It is marked by endless paperwork, tough living conditions in an unfamiliar place, and invariably, a harrowing wait. They could no longer live in the only home they knew and fled, and they have no idea where or when they might feel at home again.

Families like Ms. Fareedun’s are leading especially precarious lives now amid Sri Lanka’s economic downturn, marked by sharp inflation, soaring living costs and shortages, that has prompted scores of Sri Lankans to desperately leave the country. Sri Lanka’s Immigration and Emigration Department has issued 7 lakh passports this year, a sharp increase from 2021 and a record high, according to authorities. Under enormous economic pressure, many are attempting to leave by illegal means as well. This year alone, the Navy has intercepted nearly 1,000 Sri Lankans allegedly leaving the country by boats.

Regardless of the dire situation in Sri Lanka, refugees cannot leave the island until their papers are cleared by office of the United Nations High Commissioner for Refugees (UNHCR). And that could take upto a decade or more, as the Fareeduns’ experience shows.

Refugees in Sri Lanka
While fleeing persecution in countries in the neighbourhood, many land in Sri Lanka, which has a relatively easier visa regime. Once they arrive, they must go through different stages from being asylum seekers, to being recognised as refugees, before finally qualifying for resettlement elsewhere. This is because Sri Lanka is not a signatory to the 1951 Refugee Convention. It does not have laws or mechanisms for permanent resettlement of refugees coming in and can, at best, host them only temporarily.

According to data from the UNHCR, Sri Lanka currently has a little over 800 persons in total, mostly from Pakistan and Afghanistan, seeking resettlement. Of them, about 600 are refugees while some 160 are asylum seekers awaiting refugee status that makes them eligible for nominal monthly assistance from the agency. Following the island nation’s painful economic crash, the UN refugee agency recognised the need to double this monthly allowance to little over LKR 40,000 (roughly ₹ 9,000), refugee families said.

“It should be clearly understood that asylum-seekers and refugees do not have the right to work and are without the usual safety nets and social networks that nationals of a country have. They are therefore more vulnerable,” an official from the UNHCR told The Hindu, explaining the rationale for the assistance.

Riffat Fareedun is a certified beautician. Her husband Fareedun Saeed used to run a small business in Karachi. There are software engineers, marketing professionals and teachers in the refugee community in Negombo. But they cannot use their skills to earn a living in Sri Lanka. The monthly sum that refugees receive from UNHCR is to cover rent, medical expenses, and other living expenses, all of which have increased exponentially amid Sri Lanka’s crisis. Food inflation went up to almost 95 % in September, pointing to costs of all food staples doubling in the last year. Some families are coping with assistance from local organisations supporting refugees, or religious bodies offering assistance. Neither is sufficient or sustainable.

“A few of us, refugee families, have been buying atta in bulk to save a few hundreds. That is how bad things are,” said a refugee, requesting anonymity. “Many of us have escaped traumatic situations, we have serious health issues. I spent [LKR] 7,000 rupees (about ₹1560) on medical tests recently and the expense has badly hit our family’s monthly budget. I am also trying to cope with depression,” said the 27-year-old, looking worn out.

While the refugee families are grateful for their time in Sri Lanka, and have forged friendships with locals, there have also been instances of hostility. Having become easy targets in the past, they fear they may become objects of suspicion or anger, especially when locals, too, face growing economic hardships. The period after Easter Sunday terror attacks of 2019 — one of the blasts was at a church in Negombo, a catholic belt — saw mob attacks targeting refugees whom some angry locals saw as “Muslim”, although the refugee community includes people from varied faiths and sects. “When a Sri Lankan manager was lynched at Sialkot [Pakistan]last year we were terrified and stayed indoors, fearing attacks on us,” said another refugee living in the area. “Even during the anti-government protests and violence in Sri Lanka some months ago, we are advised to stay at home.”

“The numbers here are exceptionally small, compared to numbers in Pakistan, Bangladesh, Nepal, India, Thailand and so on. We only allow them to stay temporarily, with very little state and citizen support,” he said, adding asylum seekers and refugees are amongst the “most marginalised” in Sri Lanka, politically, socially and economically. “Their rights, dignity and wellbeing receive very little attention.”

While urging the UNHCR to expedite processing asylum seekers’ applications, Mr. Fernando said in the short term, the Sri Lankan government must include the children of refugees and asylum seekers in its free education policy and subsidy programmes. “In long term, government must offer permanent resettlement to at least a small number of refugees through a domestic mechanism as other countries do,” he said.

Meanwhile, refugee families have only their hope and resilience to count on. “Jaanu (my life), bring that file,” Riffat Fareedun told her husband in Urdu. Turning its laminated slots one after the other, she shows her daughters’ school certificates with evident pride. Now 11 and 13, the girls have topped their class in studies, won prizes in story telling competitions and chess tournaments. Between the slots is one slightly faded certificate, from 1995. It’s her own, for completing her beautician course in Karachi.

“I had a good life there. My beauty parlour, our family’s car that I drove, our love story from the time of basic mobile phones,” she giggles, looking at her husband. “I don’t have anything from that life now, except this wonderful man. I love him as much I did then.”