As Lanka’s creditors seek answers, the fallen Rajapaksas back Wickremesinghe. 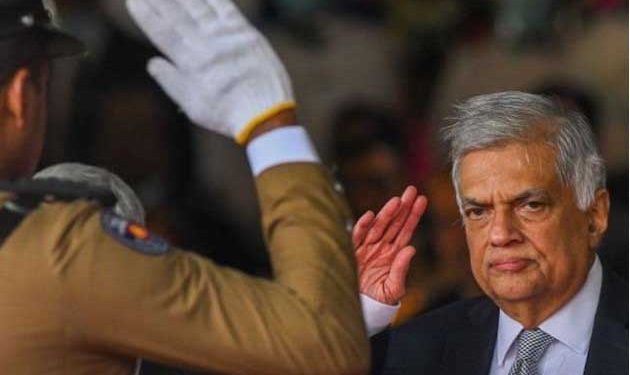 Much has changed since demonstrators drove Gotabaya Rajapaksa from office in July, the climax of months of protests after record-high inflation and depleted currency reserves bankrupted the nation.

After fleeing Sri Lanka and spending nearly two months in self-imposed exile, former leader Gotabaya Rajapaksa returned this month to a freshly painted, heavily guarded colonial-style bungalow in one of the island’s swankiest neighborhoods.
Much has changed since demonstrators drove Rajapaksa from office in July, the climax of months of protests after record-high inflation and depleted currency reserves bankrupted a country with 22 million people.

But the path is still a daunting one in Sri Lanka, where price gains recently hit 70% and shortages of basic goods persist. Though protests slowed after Rajapaksa fled to Southeast Asia, many Sri Lankans consider Wickremesinghe a close ally of the family, casting doubt over whether he can restore peace to a country that decades ago was heralded as an economic model for the region.

Protesters in Sri Lanka sense a wider plot for Wickremesinghe to restore the clan to power, even calling him “Ranil Rajapaksa” during demonstrations. The dynasty has sought to restore its reputation in recent weeks by elevating younger family members, and Mahinda Rajapaksa — Gotabaya’s brother who previously served as president for a decade — still enjoys support from many among Sri Lanka’s Sinhalese majority.

Twilight of his career

At 73, Wickremsinghe is in the twilight of his career and has struggled to connect with voters.

“Ranil is transparently a partner of the Rajapaksas,” said Dayan Jayatilleka, a former Sri Lankan diplomat and political analyst. “He’s entirely reliant on the ruling party.”

A spokesperson for Gotabaya Rajapaksa didn’t return requests for comment. Members of his party, Sri Lanka Podujana Peramuna, said in interviews that Wickremesinghe was chosen by Parliament as president because of his extensive track record in government and a strength in economic management.

“As a ruling party we could not come up with proper solutions,” said D.B. Herath of the ruling SLPP, whom Ranil appointed as state minister for livestock this month. “Though we have different policy stances, we are cooperating to find solutions to the problems of the people.”

Gotabaya’s return to Sri Lanka, despite months of the unrest, shows the resilience of the Rajapaksas, who have somehow managed to hang onto political power after leaving much of the population unable to purchase fuel or find food supplies. At one point, public support for the clan fell to 10% and demonstrators torched the family’s ancestral home.

Whether an alliance between Wickremesinghe and the Rajapaksa’s party can last until the next presidential election in 2024 remains an open question. Foreign currency reserves continue to dwindle, falling to less than $1.8 billion in August, with IMF funds unlikely to arrive for several months. Bondholders are furious over unpaid debt. And Wickremesinghe’s lack of popular support may make it tough to pass revenue-raising measures that might be required by creditors.

In recent weeks, Wickremesinghe’s administration put in place rules that allow the army and police sweeping powers to arrest protesters. He has warned of “fascist” elements in Sri Lanka, raising the prospect that he might rule with an iron fist or turn the other way to future crackdowns.

“The protests will again erupt — there’s no question about it,” said Jayadeva Uyangoda, professor emeritus of political science at the University of Colombo. “We can expect a situation with a lot of tension in the coming months.”

Wickremesinghe sees things differently. At one point he compared himself to Winston Churchill navigating Britain through World War II.

“Churchill had only four members backing him in 1939,” he told reporters recently. “How did he become prime minister? Because of the crisis. I have done the same.”

The child of a wealthy family, with an uncle who served as president of Sri Lanka for more than a decade, Wickremesinghe in many ways is the ultimate Sri Lankan insider. His political career stretches to the 1970s, when he won a seat in Parliament for the first time. Since then he’s held posts across the government, including serving as prime minister half a dozen times — though never for a full term.

Despite deep ties to the country’s elite, Wickremesinghe’s ascension to Sri Lanka’s most powerful position was unthinkable just a couple of years ago. The center-right United National Party, which he’s helmed for almost three decades, was routed during local elections in 2020.

Wickremesinghe’s fortunes changed dramatically when Gotabaya Rajapaksa appointed him to the prime minister post in May. Several weeks later, the country reached a breaking point: Protesters occupied the presidential palace and pushed Rajapaksa from office. In the melee that followed, Sri Lanka’s fractured Parliament elected Wickremesinghe as his replacement.

Over the summer, as protests reached a fever pitch, Wickremesinghe’s home was burned down. After taking office, he distanced himself from the Rajapaksas. “How am I an old friend of the Rajapaksas?” he told reporters in July at a Buddhist temple in Colombo. “I’ve been opposing them all the time.”

But those assurances have done little to convince many Sri Lankans that the new government isn’t a proxy for the Rajapaksas. In late July, the army dismantled the main protest camp in a Colombo seaside park, beating demonstrators with sticks and destroying tents.

As those scenes played out, Gotabaya Rajapaksa regrouped in Singapore and Bangkok. On the evening of Sept. 2, a procession of black vehicles with tinted windows escorted him from Sri Lanka’s airport to his home in the affluent neighborhood of Cinnamon Gardens. One lawmaker even offered her seat in Parliament to him, according to local news reports.

Wickremesinghe, on the other hand, has battled the public impression of him as entrenched with a corruptible elite, though an August poll found that more than a third of Sri Lankans surveyed trusted him to resolve the current economic crisis.

In 2015, his tenure as prime minister was marred by an insider trading scam involving the country’s central bank. He has denied involvement.

“His strength is that he’s been around,” said Jayatilleka, the former diplomat. “This is not his first rodeo. But every time he’s been near a rodeo, he’s fallen off the bucking bronco. So that’s not a very good track record either.”

Samantha surpasses Alia as the most popular actress, while Vijay and Prabhas top the list of top actors.