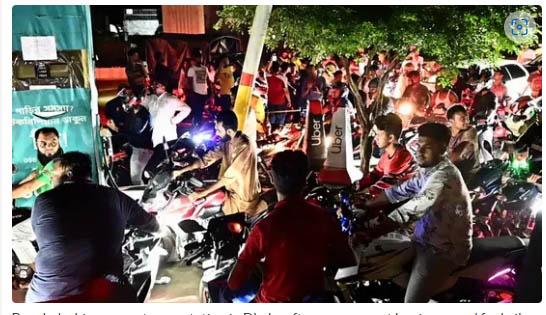 After Sri Lanka’s devastating crisis, thousands of protesters took to streets in several cities in Bangladesh after the Sheikh Hasina government hiked fuel prices by nearly 52 per cent, the highest since the neighbouring country got its independence.

Angry protesters besieged fuel stations across the South Asian nation and demanded a rollback of the unprecedented hike. The Bangladesh government has blamed the ongoing Russia-Ukraine war for the hike in fuel prices.

Russia’s invasion of Ukraine has seen global energy prices soar, even as oil has fallen back in recent weeks as recession fears mount.

Bangladesh raised fuel prices will trim the country’s subsidy burden, the government expects. However, it will put more pressure on inflation that is already running above 7 per cent, directly affecting the pockets of the commoners.

Bangladesh’s $416 billion economy has been one of the fastest-growing in the world for years but soaring energy and food prices have inflated its import bill, forcing the government to seek loans from global agencies, including the International Monetary Fund.

Thousands of people are flocking to petrol stations in Bangladesh as the government announced a 52% fuel price hike, the highest increase on record. The country is in the grip of a serious energy crisis.

For the past nine months, Bangladesh’s inflation rate has been above 6 per cent, and hit 7.48% in July, the brunt of it being faced by middle class and poorer families to meet their day to day expenses.

“We are already struggling to make ends meet. Now that the government has raised fuel prices, how will we survive?,” Mizanur Rahman, a private sector employee told Reuters.

In # Bangladesh the government has increased the price of fuel oil by Tk 34 per liter at night. As the oil pumps stopped dispensing oil, some buyers beat up the pump owner. # StepDown Hassuba# //Bangladesh Economic Crisis# Save Bangladesh Hasina #Public Press BD (@bd_public)  August 5,2022

Apart from fuel prices, the growing inflation is also bound to increased prices of kitchen staples like rice, pulses, oil, salt, as well as clothing and other daily needs.

Bangladesh’s foreign exchange reserves are dwindling. The government has taken a series of measures to contain this, including placing curbs on luxury goods imports and on fuel imports including liquefied natural gas (LNG) and shutting diesel-run power plants as it resorted to recurring power outages.

The new prices will not seem tolerable to everyone. But we had no other choice. People have to be patient,” Nasrul Hamid, state minister for power, energy and mineral resources, was quoted as saying by Reuters. He noted that state-run Bangladesh Petroleum Corporation had incurred a loss of more than 8 billion taka ($85 million) on oil sales in the six months to July.

The minister also said prices would be adjusted once global prices fall.

The three policemen who tortured two boys in Jaffna in the police station were jailed for 10 years! Court of Appeal upholds Judge Ilanchelian’s sentence!