Overseas funds cut China sovereign bonds for the fifth month in a row. 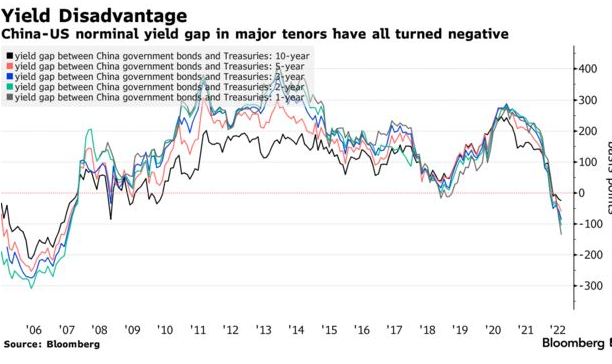 Overseas investors reduced their holdings of Chinese sovereign bonds for the fifth month in a row in June, the longest such streak on record, as rising US Treasury yields make yuan-denominated debt less appealing.

According to data released by the People’s Bank of China, global funds held about 2.3 trillion yuan ($340 billion) in Chinese government bonds in June. According to official Chinabond data, this is less than the 2.38 trillion yuan in securities they owned in May, and it marks the longest stretch of monthly outflows since Bloomberg began tracking the data in 2014.

Foreign demand for Chinese government bonds has dwindled as the yuan has weakened and yields have fallen relative to US Treasuries, which have risen as the Federal Reserve has raised interest rates to combat inflation.

On the back of a record supply of government debt and tighter liquidity, China’s benchmark 10-year yield rose eight basis points in June, the most since October. In the same period, similar-maturity US yields increased by 169 basis points as the Fed raised rates by 75 basis points and signaled the possibility of another increase in July.

The country’s potential plan to boost fiscal stimulus as it deals with Covid lockdowns and a property slump is also weighing on the appeal of Chinese debt. This would necessitate the unprecedented issuance of 1.5 trillion yuan in special bonds for the remainder of 2022, adding to the existing yuan-debt supply.

Chinese bond investors may find some solace in the central bank’s commitment to maintaining ample liquidity amid growth headwinds caused by the country’s property sector turmoil. At the same time, the risk of renewed Covid lockdowns may provide support for sovereign bonds.

According to central bank data, foreign investors’ holdings of Chinese bonds (both government and corporate) fell to 3.64 trillion yuan, or 2.6 percent of the total market, at the end of June, from 3.1 percent in January.

The outflows occur as China’s economy grows at its slowest rate since the coronavirus outbreak two years ago. Second-quarter growth was 0.4 percent year on year, falling short of the 1.2 percent forecast in a Bloomberg survey, making Beijing’s growth target for the year increasingly unattainable.

(Curtesy Bloomberg -With assistance by Tania Chen, and Wenjin Lv)

When Ranil took the oath, the electricity in the Parliament was cut! The live broadcast stops! Investigations will be handed over to the Secret Police immediately!

Colombo Institute of Research and Psychology (CIRP) celebrates milestone graduation of 300+ psychology graduates to the world.