Nayanthara On Marriage And “Lady Superstar” Tag: “I Had No Idea How It Would Be” 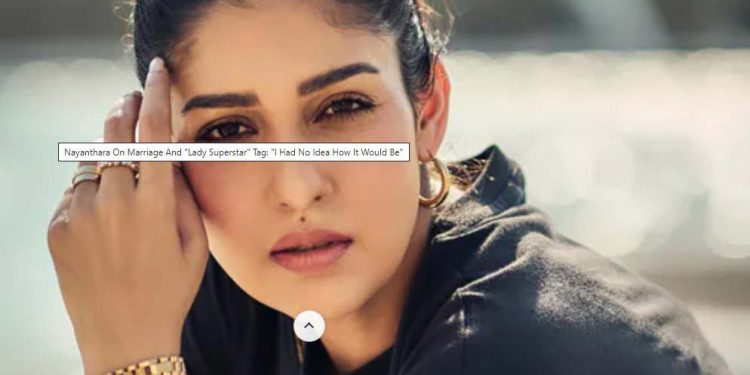 Streaming service Netflix on Saturday unveiled a teaser of a documentary on superstar Nayanthara in which she opens up about her marriage to filmmaker Vignesh Shivan as well as her passion for cinema. Titled Nayanthara: Beyond The Fairy Tale, the project will document the life and work of the actor, whose extensive filmography across Tamil, Telugu and Malayalam industries has earned her the moniker of Lady Superstar. During its global fan event TUDUM, Netflix showcased exclusive behind-the-scenes footage from the couple’s June wedding.
“I don’t understand the tags, I don’t understand the title,” the 37-year-old actor said in the teaser, discussing her Lady Superstar moniker.

Nayanthara said she believes in giving her best to anything that she does.
“When it all started, I had no idea about how it would be. I was not a filmy kid. I am just a normal girl who wants to give her 100 percent in whatever she does. Passion, a lot of passion (is there),” she added.

Having directed his actor-wife in films like Naanum Rowdydhaan and Kaathuvaakula Rendu Kaadhal, Shivan, 37, praised Nayanthara, not just as a performer but also as a person.
“More than Nayanthara the actress, she is a wonderful human being,” said the filmmaker.

The documentary is directed by Gautam Vasudev Menon and backed by The Rowdy Pictures.
“The intention behind making ‘Nayanthara: Beyond The Fairytale’ was to take audiences on a journey through how these two souls found each other, how they love and support each other and how they gear up for the next step in their lives.

“It is so much more than a story of a wedding – it is a special story of two beautiful individuals building a life together and we can’t wait for fans to take a sneak peak into this story,” the makers said.

Nayanthara and Shivan tied the knot on June 9 in a traditional South Indian ceremony at a five-star hotel in Mahabalipuram, Tamil Nadu.