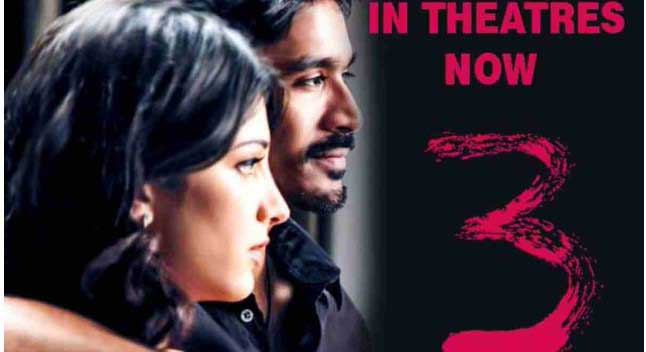 The Telugu version of Dhanush’s 2012 movie 3, was re-released in theatres to a rousing reception on the occasion of filmmaker Kasthuri Raja’s birthday.

The audience’s response to the box office is becoming increasingly unpredictable. At a time when brand new movies with big star cast face trouble bringing in decent footfalls, old movies seem to be setting cash registers ringing without breaking a sweat. The Telugu version of Dhanush’s 2012 movie 3 was re-released in theatres today on the occasion of Dhanush’s father, filmmaker Kasthuri Raja’s birthday, and it has surprised trade pundits.

Kasthuri Raja production 3 marked the directorial debut of Aishwarya Rajinikanth. The film generated massive hype worldwide before its release, thanks to the sensational “Why This Kolaveri Di” number. After the song was leaked before its official release, it went viral online, putting Anirudh Ravichander on the map. However, the response that the movie got at the box office didn’t match the success of “Why This Kolaveri Di.” At the time, 3 was said to have tanked at the box office. The film’s Telugu version couldn’t maintain a steady run even during its opening weekend.

However, the re-release of 3 has delivered completely new results. “#3Movie creates history as majority of the Theaters today reported Housefull across the Telugu states. Not an ordinary feat!!!!,” tweeted Vamsi Kaka, who is the media coordinator for many celebrities in the Telugu film industry.
Videos of the audience celebrating the movie in packed theatres have surfaced online. “@dhanushkraja’s #3Movie Telugu version has been re-released in theatres today on the account of the producer’s birthday, and it has already seen more than 150 houseful shows since morning what a surprise! This will surely be a major boost for the star’s upcoming #SIR!,” tweeted film journalist Siddarth Srinivas.

“In a Major shock to almost everyone in the Trade,@dhanushkraja & @shrutihaasan’s #3Movie is reporting Housefuls at severe places today for its Re-release this Morning in AP & TS! Even the remaining shows bookings are Good for Today,” posted AndhraBoxOffice.com.
3 tells the tragic story of a young couple and the life-shattering consequences of mental illness. Besides Dhanush, the film stars Shruti Haasan and Sivakarthikeyan. The movie was first released on March 30, 2012.

GOSL requests that a US court dismiss the Hamilton Reserve Bank’s default case.